2022: Another parliamentary year to remember for Reps By John Ameh 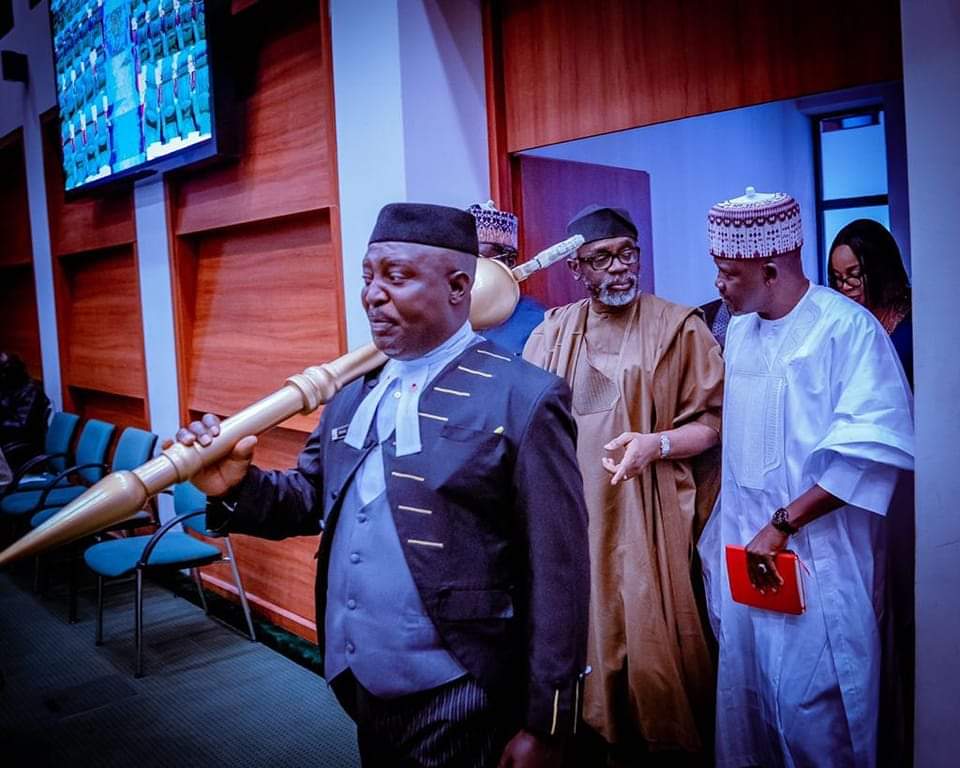 2022: Another parliamentary year to remember for Reps By John Ameh

The 9th House of Representatives has had a memorable 2022. As in previous years, the Speaker Femi Gbajabiamila-led Green Chamber of Nigeria’s National Assembly has continued to score ‘firsts’ in the continuation of its ‘Nation Building: A Joint Task’ strides, from January all the way to December.

The year is significant in one or two remarkable ways. It is the year that marks the 4th session of the 2019–2023 term of the parliament, better known as the 9th House. It means that this is the last lap for the term. The year is also a pre-election year, meaning that it will usher in the general elections in 2023 and, by implication, the 10th House!

As a serious House, the Speaker and his colleagues have remained on track throughout the year, implementing their legislative agenda, passing critical legislation, and giving backing to the other arms of government, particularly the Executive, to up the ante of governance. That elections, campaigns, and plans to retain seats in the 10th Assembly are in the mix, has not really deterred the House.

Here are some of the remarkable strides that make the year memorable for the 9th House:

One area Mr Speaker and his colleagues stood like the Rock of Gibraltar in 2022 was the quick resolution of the controversies that surrounded the Electoral Act, 2022, which could have marred the successful application of the innovations in the law in the 2023 polls. After President Muhammadu Buhari withheld his assent to the bill in 2021, owing among other things to the prohibitive cost of funding direct primaries by political parties, the House moved quickly to save the bill. It agreed to include some of the President’s recommendations, like indirect primaries and consensus candidacy, as other options, aside from direct primaries, to be used in conducting party primaries. President Buhari eventually signed the bill on February 25.

Gbajabiamila is remembered for saying that the House would not “throw the baby out with the bathwater.” That smart move by the House saved the new Electoral Act, giving Nigerians the opportunity now to expect to have the results of elections transmitted electronically by the Independent National Electoral Commission (INEC) in 2023!

It wasn’t only the Electoral Act. The House pushed for and introduced more bills in 2022, increasing the tally from across the three previous years to over 2,000 as of October 2022.

Speaker Gbajabiamila sponsored and co-sponsored some of the bills in 2022. An example was the “Bill for an Act to Provide for Establishment of the National Religious Harmony Commission; and for Related Matters,” which he co-sponsored with the Chairman, House Committee on Rules and Business, Rep. Abubakar Fulata.

There was the “Bill for an Act to Prohibit late Payment of Workers’ Wages, Pension and other Emolument in Nigeria and Prescribe Penalties for Violation, and for Related Matters.” Another one was “A Bill for an Act to Establish the Office of Budget Management of the Federation and Provide a Legal Framework for Budget Process Management in the Federal Government of Nigeria to ensure effective Regulation of Budget Preparation, Presentation, Implementation and Auditing; and for Related Matters”. The co-sponsor was Rep. Henry Nwawuba.

Mr Speaker also sponsored the Students’ Loan Bill as part of the solutions to funding not just tertiary education, but also to help indigent students access loans with ease in pursuing their academic dreams.

On December 28, the House kept its promise, stuck to the January-December budget cycle by passing the 2023 budget of N21.8 trillion. On the same day, it passed the 2022 Finance Bill, a bill to extend the capital components of the 2002 budget from December 31 to March 31, 2023; the 2022 Supplementary Appropriations Bill, and the budget of the Federal Inland Revenue Service (FIRS).

The House, in January, 2022, received and considered reports on 68 bills seeking further amendments to the 1999 Constitution, prepared by the Ad-hoc Committee on Constitution Alteration, chaired by the Deputy Speaker, Rep. Ahmed Idris Wase. It eventually passed 56 of the bills, but along with the Senate, concurred on 44 of the bills, which were later forwarded to the 36 state Houses of Assembly. The lawmakers are awaiting their colleagues from the states to conclude work on the constitution amendment.

The leadership of the House started intervening since 2021 to resolve the lingering dispute between the Federal Government and the Academic Staff Union of Universities (ASUU). In 2022, the Gbajabiamila House did more. In February 2022, ASUU embarked on one of its longest strikes, lasting eight months before it was suspended on October 14, 2022. This came following the active role played by the leadership of the House under Speaker Gbajabiamila in the discussions between the government and the union. The House provided 170bn in the 2023 budget for increment in the welfare package of university lecturers and another 300bn to revitalize Nigerian public universities. Talks are ongoing on the possibility of incorporating some aspects of the ASUU-developed UTAS into the government’s Integrated Payroll and Personnel Information System (IPPIS).

On the heels of the ASUU-FG dispute and the losses for university education, the Speaker convened a “National Summit on Tertiary Education Reform” in November essentially to find solutions to challenges in the country’s tertiary education. The summit pooled experts in the management of tertiary education, including ASUU. The target was to produce a document that could be presented not only to the Executive for action but also as a reference point in addressing tertiary education issues.

In February, the House, in an unprecedented parliamentary move, initiated the process, through a resolution, that led to the Federal Government intervening to evacuate Nigerians, especially students, trapped in the Russian/Ukraine war, back home. Recall that the Leader of the House, Rep. Alhassan Ado-Doguwa, in compliance with the resolution, personally travelled to the war region to supervise the evacuation.

Another major initiative of Speaker Gbajabiamila as the presiding officer of the 9th House was the birth of the Conference of Speakers and Heads of African Parliaments (CoSAP), which successfully held its 1st conference in Abuja on May 9, 2022.

CoSAP aims to elevate the role of African Legislatures in governance by partnering other arms in proferring solutions to development challenges through appropriate legislation, how to tackle Africa’s debt burden, making a case for debt cancellation as well as using ‘parliamentary diplomacy’ as a strategy to resolving conflicts, disagreements among sister countries and beyond.

In October 2022, Speaker Gbajabiamila scored another first when he launched the Legislative Mentorship Initiative (LMI) to groom young Nigerians to take over leadership responsibilities in governance with particular emphasis on the Legislature. It focuses on “building the next generation of Nigeria’s public sector leaders.”

Following the opening of the programme on October 3, 2022, the 74 successful trainees drawn from the 36 states of the federation and the Federal Capital Territory, underwent a three-week multi-dimensional training, including lectures, discussions, visits to key establishments, and endurance drills. They eventually passed out on November 11, 2022, becoming the first set of LMI graduates in the country!

To whom honour is due

There is no doubt that President Muhammadu Buhari, in recognising the work of Mr Speaker and how he has so far steered the ship of the 9th House, honoured him on Tuesday, October 1. Rep. Gbajabiamila was conferred with the national honour of Commander of the Federal Republic (CFR) by the President. Similarly, on October 21, President Buhari presented an Excellent Award in Public Service (EAPS) to Mr Speaker, who was one of the 44 deserving Nigerians.

On Monday, October 17, Speaker Gbajabiamila began a series of peace meetings between federal government representatives and foreign airlines, aiming to resolve the dispute over the latter’s ‘trapped funds’ in the country. Some mileage was covered in the discussions with a number of the airlines softening on their plans to close shop in Nigeria or suspend operations for some time.

Being a House that always seeks to reduce the pains of the people, the House on Tuesday, November 22, intervened in the controversial new cash withdrawal limits recently announced by the Central Bank of Nigeria. Key officials of the apex bank appeared before lawmakers on the floor in Abuja to answer questions on the policy.

However, bowing to the pressure of the House, the Bank had slightly reviewed the policy to raise the weekly withdrawal limits for individuals to N500,000 and N5million for corporate organisations.

It’s another win, a good scorecard for Gbajabiamila’s 9th House as 2023 beckons.

*John Ameh is the Special Assistant, Media (Research/Documentation) to the Speaker, House of Representatives.