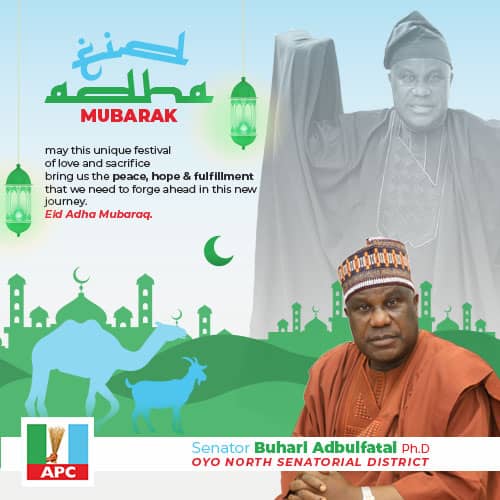 2022 Eid-Il-Kabir: Senator Buhari rejoices with Muslims
– Charges them to sustain the spirit of love, peace and sacrifice | By Semiu Azeez

As Muslims across the globe celebrate Eid-Il-Kabir 2022 today, a call has gone to people of Islamic faith in Oyo North Senatorial District to sustain the spirit of love, peace, kindness and sacrifice as demonstrated by Prophet Ibrahim who was known as father of faith to all Muslims.

The Senator who is representing the district, Dr. Buhari Abdulfatai stated this in his felicitation message on 2022 Eid-Il-Kabir festival to Muslims in Oyo North in the early hours of today.

While congratulating all Muslims in the district on the occasion, Senator Buhari charged them to use the joyous moment to pray for peace, unity and prosperity of Oyo North, Oyo State and the country at large considering numerous challenges the country is facing particularly on insecurity.

The Senator assured his constituents of sustainable outstanding representation in the Senate while charging them to remember him in prayers so that his vision of having a pace setter district featured with unprecedented development in every sphere of life can be accomplished soonest.

The lawmaker who congratulated the families of his constituents totalling 39 who had just concluded their training and became officers of Nigerian Police Force disclosed that his priority has been assisting the unemployed graduates and youths to become economically independent through viable employment opportunities.

The Senator also revealed how he facilitated employment of 21 graduates from his district same time last year when he got them all fixed with National Institute of Transport Technology.

“I want to use this medium firstly to rejoice with the beneficiaries and their families at large as I charge them to be good ambassadors of Oyo North Senatorial District in their various places of works”.

He added “I want to pledge that I am going to be more committed to seeing to the employments and empowerments of our younger ones so that they can all become useful not only to themselves but to their families and our societies at large in the nearest future”.

“As we celebrate this year Eid-Il-Kabir, I am charging my people in Oyo North to be watchful and stay safe against all odds capable of cutting their lives short and rendered them useless as a result of loss of properties,” Senator Buhari said.

The lawmaker wished all the Muslims faithfuls a happy celebration and prayed onto God to spare their lives to celebrate many of the festival on the surface of earth.