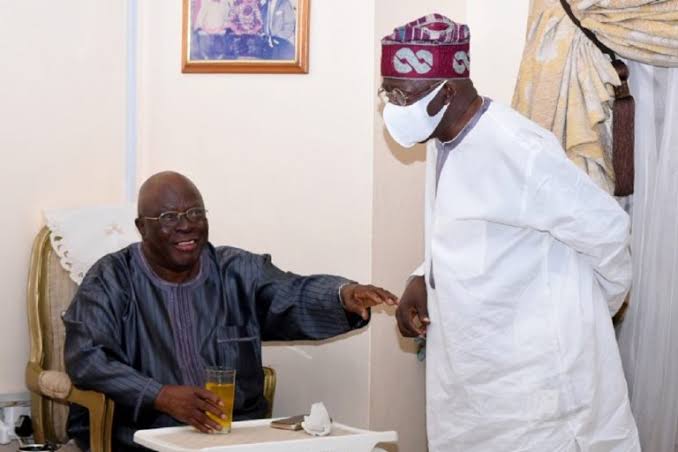 ADEBANJO fought IGE till the latter breath his last. He has always preferred being a godfather but has never won any election for himself in his 94 years on earth. The battle line between Adebanjo and Tinubu was drawn in 2003 and every aspect of that battle has been diminishing Adebanjo, making him the king of only rhetorics and vindictiveness.

Prior to this, Adebanjo, in order to prevent Bola Ige from running for Presidency in 2003 had lobbied Afenifere to support PDP and OBJ in 2003 at the Presidential elections while OBJ will support AD at state elections, Bola Ige saw this crafty moves, he resigned from OBJ’s government to enable him carry AD flag in 2003 because without a presidential candidate for AD, the party will be vulnerable in front of its ultimate death! While Bola Ige was making this efforts, he was murdered in his bedroom in Ibadan a few hours before Christmas in 2001! AD was assassinated technically!

Therefore, the option of AD not having a presidential candidate gained momentum but another Bola from Lagos rose against it. It’s like BOLAs are very smarter politicians. However, This second Bola could not galvanise the kind of support of Bola Ige among the Afenifere and AD Leaders, 5 of the 6 Governors of AD bowed to Afenifere but Tinubu stood alone. All the 5 who agreed to work with the PDP in 2003 lost their elections, only BOLA of Lagos won and survived. Since then, Afenifere’s invincibility as demonstrated by vindictive Adebanjo evaporated. OBJ later appointed the Chairman of AD as his Special Assistant in Abuja so that the coffin of that party would be properly nailed.

After 2003 election, Adebanjo and Co showed no remorse, instead they saw Lagos as their only surviving investment and still wanted to be the chief adviser of Tinubu. Tinubu only tolerated them till 2006 when they wanted to repeat same error of 2003. Tinubu carried his Fashola and escaped from the AD(that has forced him out anyway) so that he won’t follow the corpse to enter the grave! He used one stone to kill two birds, providing a home for the victimised Atiku Abubakar and a new platform away from BABA SO’PE of Adebanjo’s Afenifere! Lagos was saved again and AD lost totally again! Since then, Adebanjo has been giving support to the PDP in local elections because he has vowed not to be on same side with Tinubu forever.

Adebanjo was the ring leader of those who supported Buhari in the SW in 2011, he presented Buhari as the saviour, he spoke the unspoken truth about the respected and honest General. However, he wasn’t supporting Buhari because of the undeniable sterling qualities of Buhari but because Tinubu was not with Buhari in 2011, Tinubu’s party supported Ribadu. In 2015, when Tinubu supported Buhari, same Buhari was contesting, it was the same Jonathan that was still his opponent as it was in 2011 but Adebanjo said exactly the opposite of what he said about Buhari in 2011 in 2015. Buhari turned suddenly to what must never happen…….wow, all because of Tinubu the last BOLA standing!

In 2007 when Tinubu presented Atiku as candidate, Adebanjo was totally against Atiku but in 2019 when Atiku was the main challenger to Tinubu’s party, Adebanjo declared support for Atiku. That is 94 year old vindictive Adebanjo for you!

Initially, in the build up to the 2007 election, Adebanjo’s aversion for Fashola and his passion to impose Tinubu’s successor made him send Tinubu away from AD under the control of Afenifere, however, Fashola won in 2007 and AD became history even Adebanjo abandoned it! Adebanjo was supporting anything against Tinubu, he supported Saraki when he became Senate President and called Tinubu a Ludo player through his then Spokesperson of blessed memory. He supported the imaginary Aso Rock cabal and also vowed that Asiwaju would never get APC Ticket……..”Buhari will never allow him to get the ticket, write it down, Tinubu doesn’t know what I know…..”, he boasted. The rest is history.

2023 is probably the grand finale and battle royale for Adebanjo because that year, his greatest enemy who destroyed his godfatherism career to become the JAGABAN and ASIWAJU simultaneously will, himself, become the President of Nigeria. Adebanjo would wish he never witness such, that is a crunching defeat of the only thing he holds dear which is vindictiveness! Adebanjo doesn’t know or love Obi, he only hates Tinubu, if Tinubu had presented Obi, Adebanjo will be moving from one media house to another saying Ill of him. Adebanjo knows he’s at the ripe age, however, he still wants to go knowing fully well that Tinubu amounts to nothing which is his own lifetime Ambition.

Unfortunately for Adebanjo, no one can shut the door that is opened by the Almighty God. And Yoruba say “If one pursues another fellow without catching up, it’s better to calm down because enmity has a limit too…..”.

Good evening to all Progressives only.

Previous Posts Asíwájú Tinubu Mourns Rev. Olumakaiye
Next Posts As PDP schemes a return to power through the courts By Jesutega Onokpasa