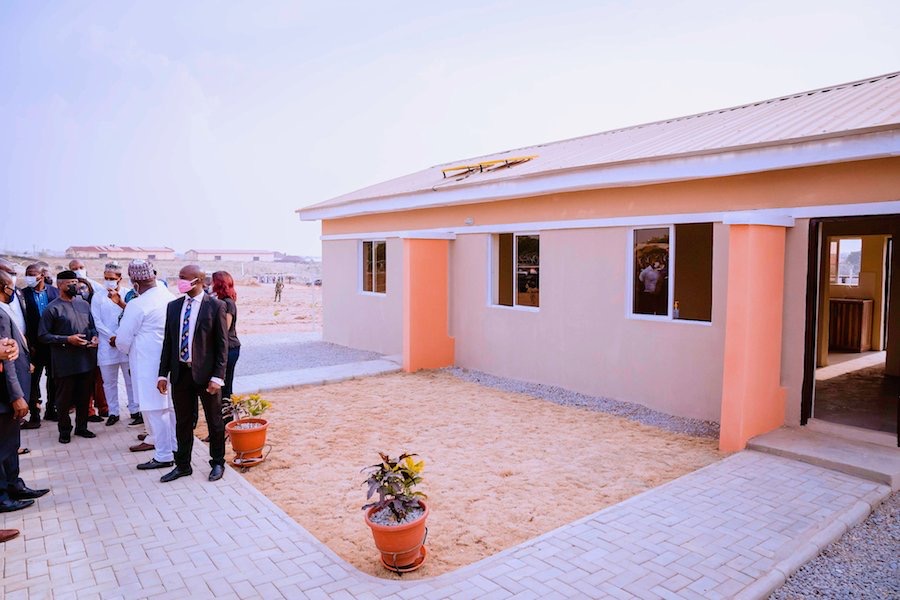 Vice President Yemi Osinbajo is perplexed some people believe it is impossible to build 300,000 housing units across the country in a year, breaking it down to 400 homes per local government area.

Last month, the vice president announced the federal government’s desire to implement a Social Housing Scheme where 300,000 one and two-bedroom houses will be constructed under the Economic Sustainability Plan (ESP) for low income earning Nigerians.

“It was quite puzzling to me when people said that our plan to build 300,000 houses under the ESP was too ambitious a target.

Vice President Osinbajo stated this recently in a keynote address at a virtual one-day economic summit organised by the Central Bank of Nigeria, the Banker’s Committee, and the Vanguard Newspaper.

The vice president said it was important to think big when considering national development, stating “in order to engender sustained economic growth, we must think in terms of scale. I am quite concerned when I hear that national interventions are classified as pilots involving sometimes no more than 1000 people. Given the size of our population, we cannot afford the luxury of pilot projects. We should design our interventions very carefully and then go big.

“The task of national development requires that we fire on all cylinders. After all, at one stage, China was building 1.9 million housing units per year over a number of years.”

Model houses under the Social Housing Scheme have been built in Dei Dei in the Federal Capital Territory, and after inspecting them last month, Osinbajo declared they were of good quality and design, as well as affordable.

He said, “On the average, anybody who is earning N30,000 a month and is ready to spend a third of that amount, will be able to afford one of these houses. That is the plan. What I have seen so far, there is a one-bedroom unit and there is a two-bedroom unit, both coming under N2 million.

“I think that this is a very good thing indeed. And a point has been made that it is possible to build good, decent accommodation that isn’t out of the reach of practically everyone.”

The grand plan, he said was to implement a Mass Housing Programme across the country. “We are hoping that we will be able to replicate this not just in Abuja but all over the country. So far, the Family Homes Fund is in 11 States, and they have given up land for the project.

“We are hoping that this year, we will be able to very rapidly improve the scale and speed of putting these houses in place. Once we are able to get moving quickly, we think we can make available several thousands of houses across the country and more people can afford to live in such houses.”

The nation’s cement manufacturers are in on it, he said, adding that “they have agreed to give cement for this project at considerable discount which is a very helpful thing to do and we really commend and thank them for the contributions they are making, it is a very patriotic thing on their part. They also see the importance of this Mass Housing Programme.”

“I expect that this is a project that will excite the interest of financiers and bankers and I encourage you all to lend support to make it a success,” Osinbajo to the conference’s participants.

The CBN Governor Godwin Emefiele said with the decline in revenues due to federal and state government, alternative ways of funding infrastructure remained critical if the government was to generate sustained growth of the economy.

“As we are all aware, a well-built infrastructure system can have a multiplier effect on growth by enabling the expansion of business activities in the country. That is why I am delighted that Mr. President has continued to give all the necessary approvals and support to establish the Infrastructure Corporation of Nigeria Limited.

“InfraCorp will be co-owned by the CBN, the African Finance Corporation and the Nigerian Sovereign Investment Authority and would become fully operational by the second quarter of 2021. This vehicle would enable the use of private and public capital to support infrastructure investment that will have a multiplier effect on growth across critical sectors.”