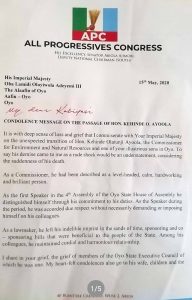 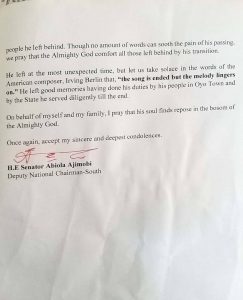 The Deputy National Chairman (South), of the All Progressives Congress (APC), Senator Abiola Ajimobi had sent a message of condolence to Oyo State Governor, Engineer Seyi Makinde and the Alaafin of Oyo, Oba Lamidi Olayiwola Adeyemi III over the death of the State’s Commissioner for Environment and Natural Resources, Hon Kehinde Olatunji Ayoola. 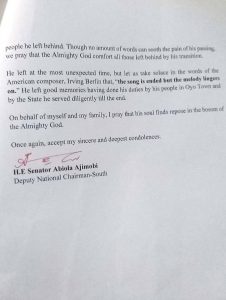 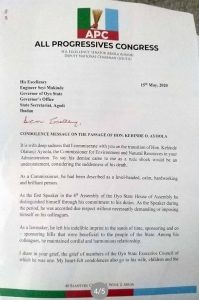 In a letter personally signed by him, Ajimobi, the immediate past governor of Oyo State, expressed shock and deep sadness over the death of Ayoola. He described the late Commissioner as a level-headed, calm, hardworking and brilliant person. In the letter to the Alaafin, Ajimobi decribed the Ayoola as an illustrious son of Oyo. Reproduced below is ann excerpt of the letter.

“It is with deep sadness that I commiserate with you onthe transition of Hon. Kehinde Olatunji Ayoola, the Commissioner for Environment and Natural Resources…To say his demise came to me as a rude shock would be an understatement, considering the suddenness of his death.

“As a Commissioner, he had been described as a level-headed, calm, hardworking and brilliant person.

“As the first Speaker in the 4th Assembly of the Oyo State House of Assembly he distinguished himself through his commitment to his duties. As the Speaker during that Assembly, he was accorded due respect without necessarily demanding or imposing himself on his colleagues.

“As a lawmaker, he left his indelible imprint in the sands of time, sponsoring and co – sponsoring bills that were beneficial to the people of the State. Among his colleagues, he maintained cordial and harmonious relationship.

“I share in your grief, the grief of members of the Oyo State Executive Council of which he was one. My heart-felt condolences also go to his wife, children and the people he left behind. Though no amount of words can sooth the pain of his passing, we pray that the Almighty God comfort all those left behind by his transition.

“He left at the most unexpected time, but let us take solace in the words of the American composer, Irving Berlin that, “the song is ended but the melody lingers on.” He left good memories having done his duties by his people in Oyo Town and by the State he served diligently till the end.

“On behalf of myself and my family, I pray that his soul finds repose in the bosom of the Almighty God.

“Once again, accept my sincere and deepest condolences”.