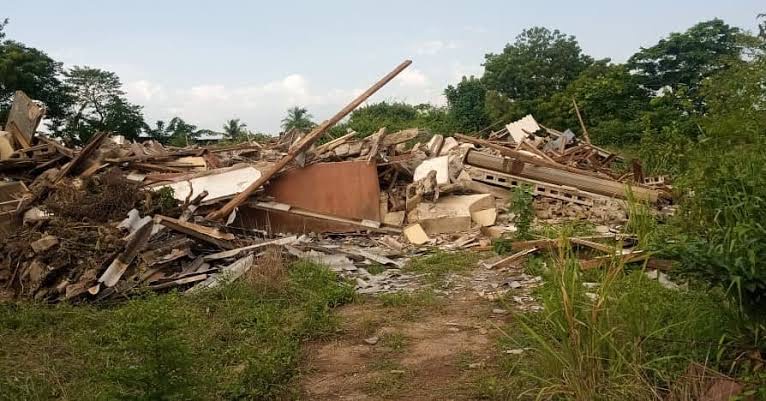 It’s a piece of stale news that the BCOS staff quarters had been demolished and cleared of all debris. What’s also a piece of stale news but which may sound fresh to the members of the public is that the said quarters converted to a new GRA has been alleged to have been allocated to serving officials, friends, families and political cronies of the present Oyo state government, including the Chairman of the BCOS, Prince Dotun Oyelade, who was alleged to have had his land allocation and was looking for buyers to buy the plot allocated to him.

This might sound spurious but it’s what’s been alleged.

The processes of allocation were said to have been completed even before the demolition and the eventual payments of the paltry compensations to the affected BCOS staffers who were occupants of the demolished quarters.

As we speak, sources who liked to maintain anonymity claimed that apart from the realisation that the individual plots of land said to have been allocated to the friends of the government were being offered for sale by the beneficiaries at prices between 15m to 20m naira while the rates at which the government allocated the plots of land to the beneficiaries were hushed, there’s also the claim that the plots of land left were said to have been reserved for the Governor himself.

It was also claimed by our sources that other cronies close to the government who could not get land allocation at the new GRA were being pacified with plots of land at another new GRA along Lagos-Ibadan Expressway, opposite Aramed Medical Centre.

The All Progressives Congress (APC) as the main opposition party in the state cried out over the mindless reclaiming and demolition of the former BCOS staff quarters for selfish ends by the state government under Governor Seyi Makinde. The government was however quick to debunk that APC was crying wolf where there’s none.

However, the recent allegations of hasty allocations and sales of parcels of land at the new GRA confirmed APC’s fears that the state government under Governor Seyi Makinde seemed to be on a mission to leave the state high and dry by the time his tenure elapses in 2023.

Another issue which calls for concern is the alleged naming of the GRA after late Engr Lere Adigun, the founder of Sahara Engineers, who was said to be Governor Seyi Makinde’s godfather while alive.

What did late Engr Lere Adigun do to impact the state positively to have deserved being immortalized, using a public monument like a GRA?

If Governor Makinde feels that late Engr Lere Adigun impacted his own personal life in a most positive way, is it right to use public property to immortalise him? It’s quite absurd, to say the least!

Naming the former BCOS staff quarters as Lere Adigun GRA as being alleged is a disservice to the founding fathers of the broadcasting outfit, and even to those veteran broadcasters who had worked tirelessly to bring the station to the enviable heights it occupies now.

If true, Governor Makinde will do well to rethink naming the new GRA after late Engr Lere Adigun who was a prominent private citizen of the state. If the governor feels so indebted as to repay the late Engr’s magnanimity to him at all cost, it will score him high to rename Omituntun House at Iwo Road after the departed Engr.

Naming the new GRA after late Lere Adigun is as misplaced as it’s a misuse of public property. The impunity with which the present government is squandering away Oyo’s common patrimonies should worry patriotic citizens of the state.

The government still holds obstinately to the 50-year concession of Agbowo Shopping Complex, which will assure that the state benefits little or nothing from the concession for the next 50 years.

What’s worse in all of these is that there’s also an allegation that all the concessions and developments being implemented by the state government were sourced to ‘foreign’ companies and individuals.