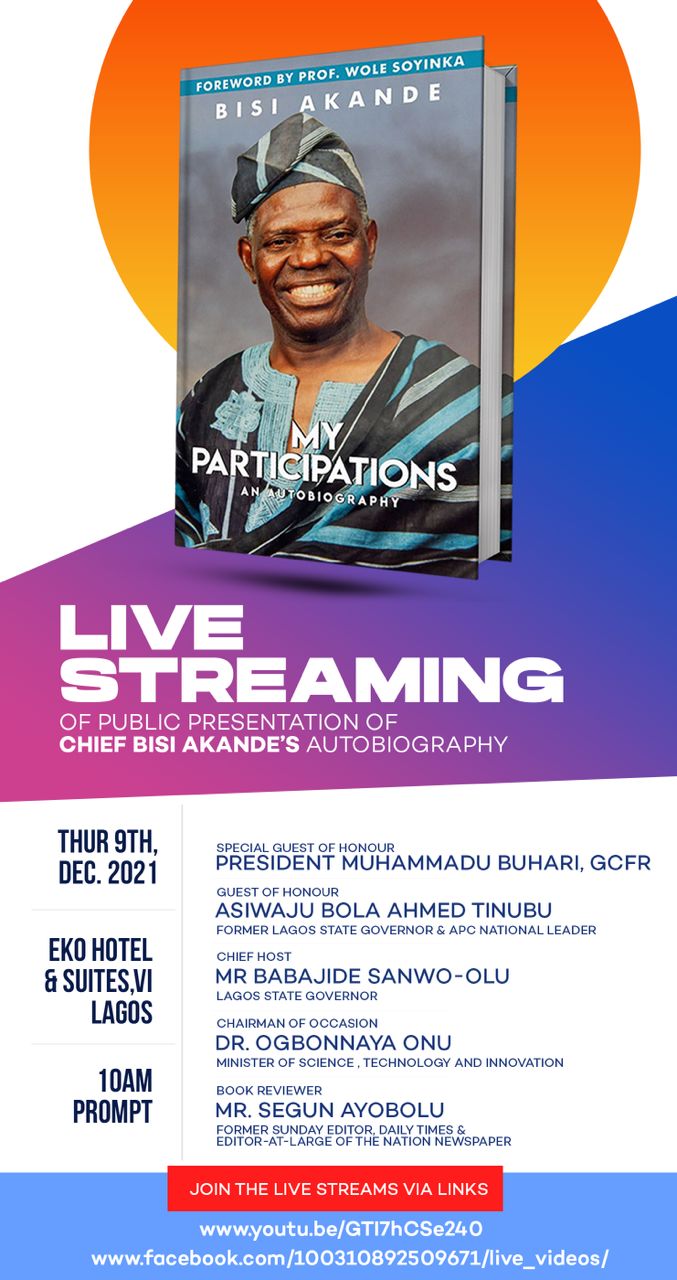 President Muhammadu Buhari will lead other dignitaries to attend the public presentation of ‘My Participations,’ the autobiography of Chief Bisi Akande, on Thursday December 9, 2021 at the Eko Hotels and Suites, Victoria Island, Lagos.

Akande, second elected Governor of Osun State, was the first national chairman of the ruling All Progressives Congress, APC, which brought Buhari to power in 2015.

Gaskia Media Ltd, a Lagos-based media and publishing company, is the publisher of the 560-page book.  It is Akande’s ninth book and may prove to be the most controversial being a comprehensive narration of the former governor’s impactful, colourful and crowded political career.

“This work is a national gift that could not have been more instructively timed,” states Professor Wole Soyinka, Africa’s first Nobel laureate for literature, in his gripping Foreword to the book.

“There are books whose very handling must be done with heavily insulated gloves since, virtually every page sizzles with contradictions between attestable reality and impudent claims, attempts to cover past crimes and dodge responsibilities.  Not so, this contribution from the Wise One of Ila-Orangun.  If there is any sizzling, it is simply the fire of truth’s passion that leaps at the reader from between the covers. Akande’s fire purifies, being a flame of illumination carried over from real life to brightens the pages of a saga of service to Nigerian humanity.”

The book is the most comprehensive autobiography in recent times of a statesman of Akande’s national stature and public service experience, which spans almost half-a-century.

Trained as an accountant, he was employed in his younger days as an executive of BritishPetroleum, one of the global behemoths dominating the oil industry.

He started his involvement in politics as a councilor in Ila-Orangun, Osun State, before he was elected into the Constituent Assembly in 1977, taking part in the historic assignment of preparing the Nigerian Constitution.  In 1979 when Chief Bola Ige became the first elected Governor of old Oyo State, he made Akande his Secretary to the State Government, SSG.  By 1983, following the rumpus in the ruling Unity Party of Nigeria, UPN, of Oyo State, Akande became Ige’s Deputy Governor.

Akande was one of the hundreds of politicians detained by the military following the collapse of the Second Republic in 1983.  Though he regained his freedom in 1985, he vowed never to participate in politics again.  However, he soon found himself at the barricade, joining other patriots in the vanguard of opposition tomilitary rule and emerging as the Osun State leader of Afenifere, the mainstream Yoruba cultural and political movement and of the opposition National Democratic Coalition, NADECO.  When the military departed in 1999, he became the second elected Governor of Osun State.

My Participations dwells on the author’s years of power and its aftermath.  The book explains the byzantine politics and convoluted negotiations that resulted in the formation of the APC and the ultimate triumph of the party in the 2015 general elections.

Some of Akande’s most faithful companions in the power game are participating in the event of Thursday which is also expected to witness the attendance of political bigwigs, including governors, ministers, senators and other prominent citizens in the power loop.  Thechairman of the occasion is Dr. Ogbonaya Onu,the Honourable Minister of Science, Technology and Innovation. The Chief Presenter is Alhaji Kashim Ibrahim-Imam, one of the pivotal figures in the negotiations that gave birth to the APC.  The book reviewer is Segun Ayobolu, a well-known journalist and columnist.  The event will re-affirm Akande’s relevance and clout as one of the dominant political figures of modern Nigerian politics.