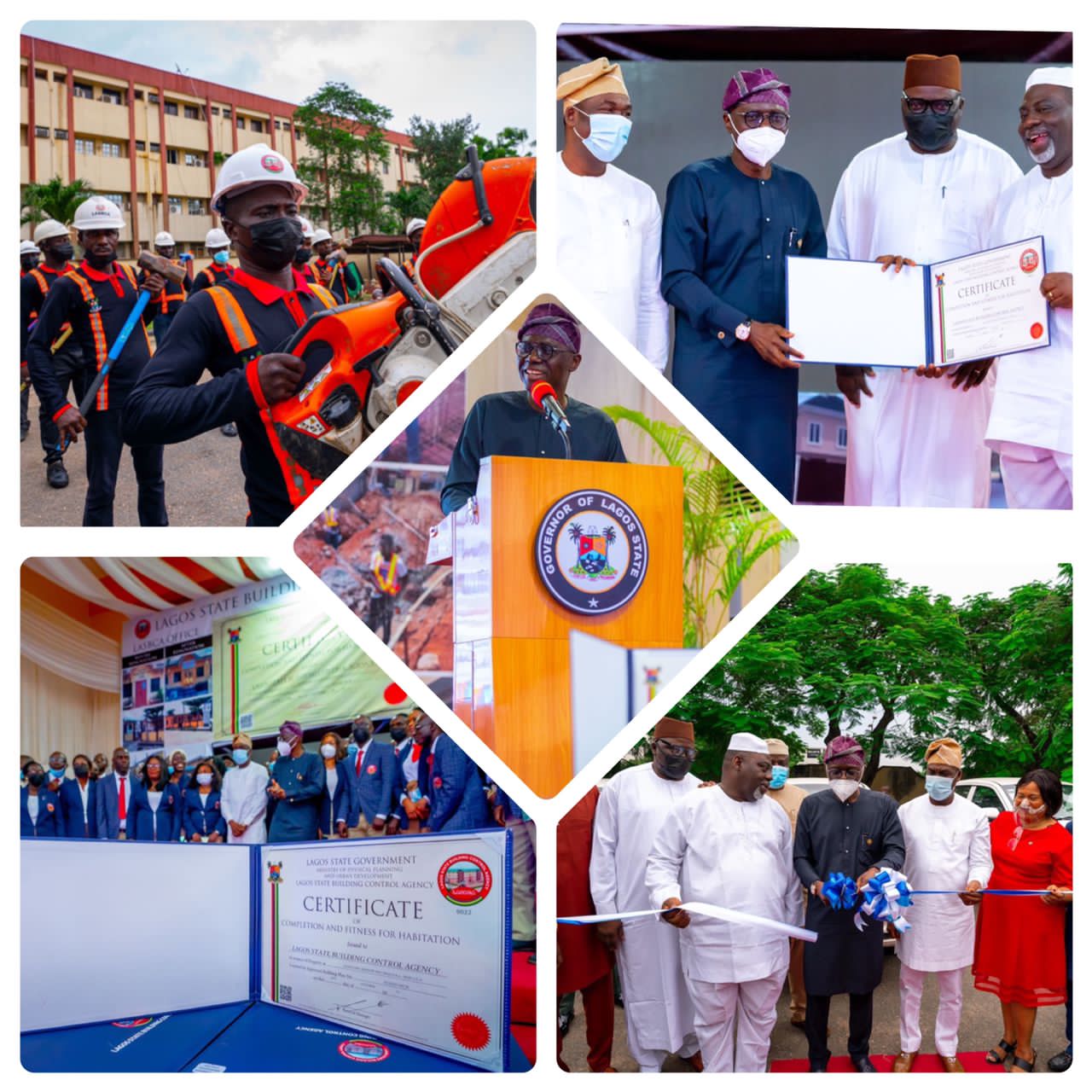 All buildings in Lagos State will now be issued licence for safe habitation. Governor Babajide Sanwo-Olu, on Wednesday, launched a rebranded Certificate of Completion and Fitness for Habitation with the objective to safeguard residents’ lives and address the root causes of building collapse.

The Governor empowered the Lagos State Building Control Agency (LASBCA) with the mandate to issue the certificate to all existing and new building developments, thereby ensuring their resilience and safety for occupancy.

The fitness certificate was initiated to find a lasting solution to structural defects, building collapse and other building contraventions in line with international best practice.

Sanwo-Olu launched the certificate at an event held at Adeyemi Bero Auditorium in Secretariat, Alausa.

The Governor, who described the initiative as a “game changer”, said the financial and emotional loss that usually followed incidents of building collapse led to the design of the innovative approach to control physical developments and safeguard people’s lives.

The State Government’s intention, Sanwo-Olu said, is to ensure the close monitoring of building construction works by LASBCA officials, from the foundation stage to completion.

He said: “This event is a testimony to our determination to address incidents of building collapse, by ensuring that due processes are followed in physical development activities in a way that will usher in new practice and bring about saner environment devoid of avoidable loss of lives and properties.

“The launch of the Certificate of Completion and Fitness for Habitation is one of the moves to further strengthen our resolve to control building collapse incidents. This is a game changer in building control strategies as it portrays us a government that thinks ahead and that is concerned about the safety of lives and properties of the citizens.”

Sanwo-Olu linked previous building collapse incidents recorded in Lagos to low compliance to physical planning laws, noting that unenforced building codes would have dire consequences on lives of the residents.

State government, the Governor said, would start treating house owners, contractors and relevant stakeholders as individuals responsible for collapse of buildings, should they fail to obtain the fitness certificate on their buildings.

The Governor directed the Ministry of Physical Planning and Urban Development and its agencies to simplify the approval process for permits in order to speed up the issuance.

He said: “Acceptance of this Certificate of Fitness can only gain a prime place if would-be tenant or property buyer always request for the certificate from the landlord or owner of the building before payment of their rents or conclusion of property transaction to ensure the building is indeed safe.

“The workability of the initiative depends majorly on the level of acceptance by the general public and this will speak volume about our readiness to bring about desired changes in our environment and also embrace ideas that would further ensure our safety and protection.”

Commissioner for Physical Planning and Urban Development, Dr. Idris Salako, said LASBCA would be conducting stage-by-stage inspection on building construction to ensure property developers adopt quality construction methods and materials throughout the period of work before issuing the fitness certificate.

The Commissioner said existing buildings seeking to obtain the certificate and buildings detected to be distressed would be required to present satisfying results of Non-Destructive Test in order to ensure the structural integrity and prevent imminent collapse.

Salako charged the Government officials assigned to the task to ensure diligence, integrity and honesty in the discharge of their duty.

LASBCA General Manager, Arc. Gbolahan Oki, said the agency’s core mandate was to correct anomalies in the building construction industry, stressing that the agency would always act in the interest of the public to prevent loss of human lives and valuable properties.

“Without a doubt, the relaunch of the Certificate of Fitness for Habitation stands to benefit both the State and the citizenry. Obtaining the certificate entails that every stage of a building construction will be closely monitored by the LASBCA officials. This process is aimed at ensuring that all buildings in the state are deemed safe and habitable for occupants,” Oki said.

At the event, Governor presented Certificates of Completion and Fitness for Habitation to 20 property developers whose buildings were monitored by LASBCA from foundation to completion.