Deborah – A Murder most Foul

We the members of Majeobaje Community Development Initiative (Majeobaje) pray for the peaceful repose of the soul of Deborah Samuel, who was lynched on 12-May-2022, allegedly by fellow students of the Shehu Shagari College of Education. We commiserate with family and friends and pray for God’s judgement on her murderers and tormentors.
We join all well-meaning Nigerians including His Eminence, Sultan Muhammadu Abubakar and His Excellency, Bishop Mathew Kukah, in condemning the lynching of young Deborah and call on all patriotic Nigerian leaders to work in unison to ensure that justice is done. 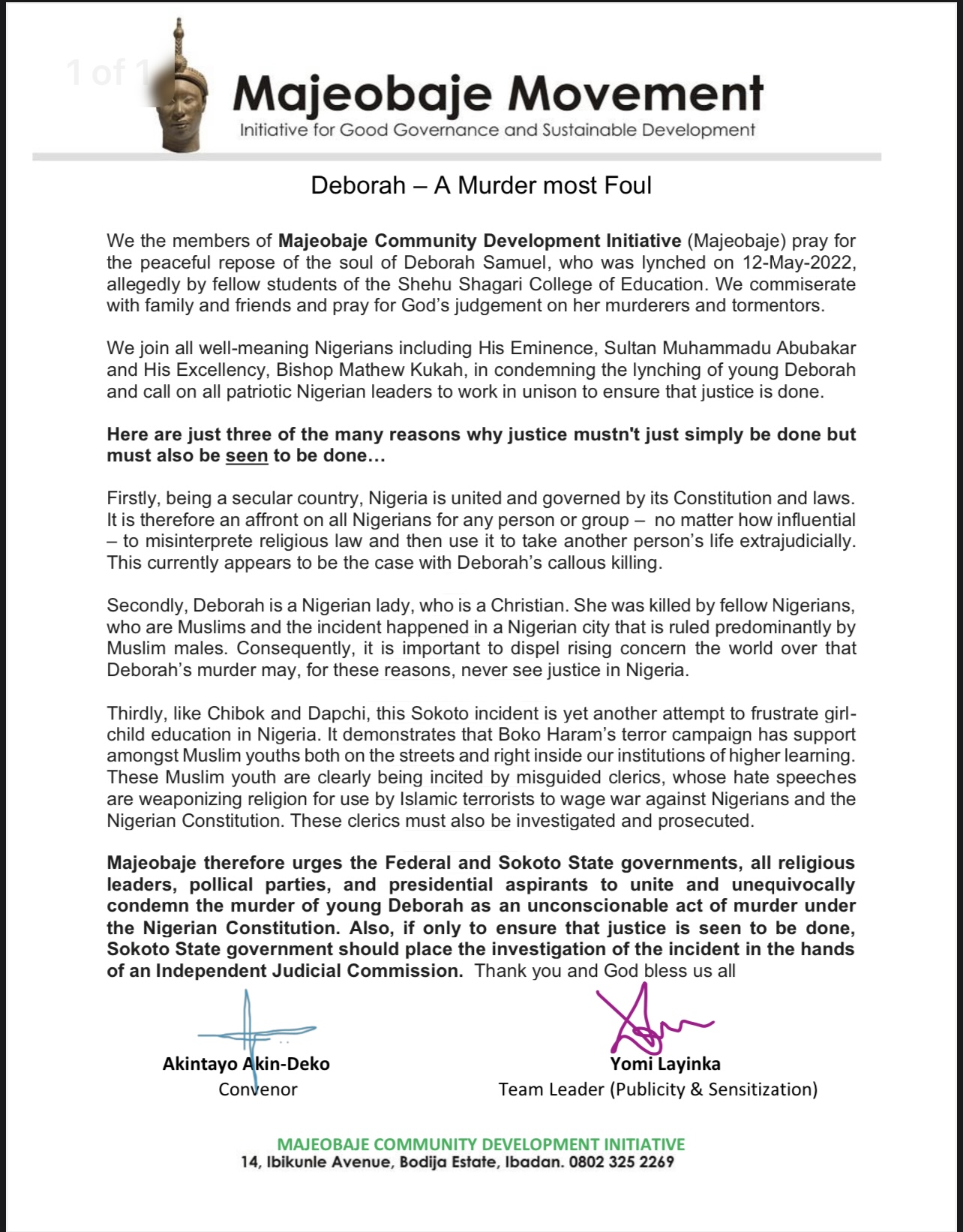 Firstly, being a secular country, Nigeria is united and governed by its Constitution and laws. It is therefore an affront on all Nigerians for any person or group – no matter how influential – to misinterprete religious law and then use it to take another person’s life extrajudicially. This currently appears to be the case with Deborah’s callous killing.

Secondly, Deborah is a Nigerian lady, who is a Christian. She was killed by fellow Nigerians, who are Muslims and the incident happened in a Nigerian city that is ruled predominantly by Muslim males. Consequently, it is important to dispel rising concern the world over that

Deborah’s murder may, for these reasons, never see justice in Nigeria.
Thirdly, like Chibok and Dapchi, this Sokoto incident is yet another attempt to frustrate girl- child education in Nigeria. It demonstrates that Boko Haram’s terror campaign has support amongst Muslim youths both on the streets and right inside our institutions of higher learning.

These Muslim youth are clearly being incited by misguided clerics, whose hate speeches are weaponizing religion for use by Islamic terrorists to wage war against Nigerians and the Nigerian Constitution. These clerics must also be investigated and prosecuted.

Majeobaje therefore urges the Federal and Sokoto State governments, all religious leaders, pollical parties, and presidential aspirants to unite and unequivocally condemn the murder of young Deborah as an unconscionable act of murder under
the Nigerian Constitution.

Also, if only to ensure that justice is seen to be done, Sokoto State government should place the investigation of the incident in the hands of an Independent Judicial Commission. Thank you and God bless us all