Distinction: Sanwo-Olu Gets A+ Rating In Covid-19, Security, Infrastructure – Report 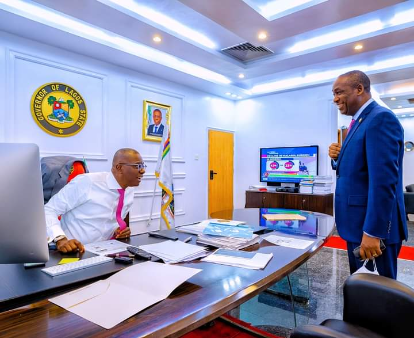 Best man Jumbo-Nze noted that the verdict of Sanwolu as the best governor using the criteria underscored the position of Lagos residents about their governor.

According to the report, Governor Wike of Rivers state emerged second for management of environment/waste and Covid 19.

A statement by Best Media Consultants said the research was conducted in its quest to deepen Nigeria’s democracy and to feel the pulse of Nigerians on governance in four major commercial cities in Nigeria, namely Lagos, Abia, Kano and Rivers states.

The group said it deployed the face-to-face interviewing technique through the use of a structured questionnaire in conducting the research.

“Our audience have travelled to the four commercial cities not less than five (5) times in the last 24 months. They read, listen and watch core media platforms often. They were drawn from the ABC, socio economic class, they cut across both sex (male and female).All respondents were screened to eliminate political bias, interest, loyalty and sympathy. They were all non-partisan.Timing: Research study was conducted in June/July 2021

According to the findings “With a mean score of +4.41(96%) our audience tended to believe Governor Babajide Sanwo-Olu have handled Covid 19 Pandemic better than others. Governor Wike was rated +3.44 (77%).

“Security no doubt have become a major challenge across the country, Governor Babajide was rated +3.32, on handling of security challenges in Lagos. This call for more efforts, when compared to others, he has done better than Governor Wike who was rated +2.42

“Governor Babajide Sanwo-Olu humility, is further confirmed by the findings of this research study which is non-partisan, unbiased and unsympathetic to him, his party APC and government, as all our respondents were drawn from outside his state (Lagos).

Governor Ikpeazu came second with a measure of +3.82, while Governor Wike was seen as the arrogant amongst governors surveyed.

“With a mean score of +3.84, Governor Wike was rated to have done more in infrastructure followed by Governor Ganduje with +3.64, while Governor Babajide was rated +3.43. It is important to note here that Governor Sanwo-Olu is in his first term in office while others are in the second and last term as Governors of their states. Therefore his achievement is worth celebrating.

“85% of our audience said, Governor Babajide Sanwo-Olu have done well/very well in the management of his state economy, Governor Ganduje was the least rated on management of economy.

“With mean score of +3.48 and +3.47 respectively, Governor Babajide Sanwo-Olu of Lagos State and Governor Wike of River state were said to have done fair on environment and waste management in their states compared to Governor Ikpeazu’s +2.63”