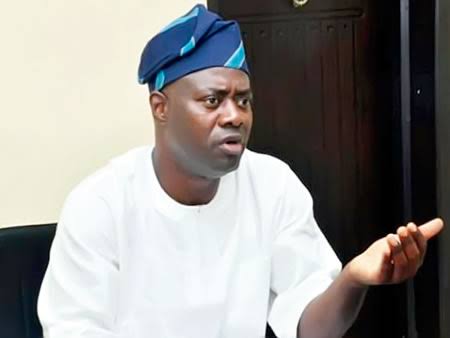 Oyo State Governor, Engr SEYI MAKINDE Started Governance at the same time with most of other Governors on May 29th 2019.

In other not to be seen as comparing Past Government of 8 years or (96 months) with 31 months Government, we would be taking a look at Governors who are serving at the same time with Gov Seyi Makinde and in order not to have lengthy appraisal, let’s restrict ourselves to just two states, one from the North, BORNO and another one from the South, CROSS RIVER States.

Within 31 months, Borno Governor, who if decided to be using BOKO HARAM INSURGENCY as an alibi for Non-performance might be excused, but just recently hosted President Muhammadu Buhari to commission long list of Projects he started.

As at the last count, he has executed 556 Projects with World Class Roads, Hospitals with latest diagnostic equipments, Classrooms, furnished with state of the art instructional materials.

Let’s go to Cross River State, where Prof Ben Ayade has tackled the Youth Unemployment SERIOUSLY with the establishment of CHICKEN FARM, where 24,000 Chicken are slaughtered daily with automated processing plant which got members of House of Representatives on Agriculture to applaud the REAL EMPOWERMENT AND EMPLOYMENT Opportunities for the Youth of Cross River State and by extension Nigeria unlike lip service Employment and Empowerment elsewhere.

The Cross River State Chicken Farm has back up value chain of Maize Farm and processing Fishmeal to process the Poultry feeds which are all Quality Employment and Empowerment for the idle Graduates.

Gov Seyi Makinde destroyed Lekan Salami Stadium, Adamasingba, Ibadan with nebulous #5. 5bn Loan, which brought International disgrace to Oyo State on the commissioning day with WATER LOGGED PITCH and now that it is not raining, the “Refurbished Pitch” is like “SAHARA DESERT”, the fans that were in the Stadium on Sunday 26th December 2021, will tell you their bitterness as to how the turf almost caused defeat to 3SC because the Surface is just not ideal for footballing any longer.

The 31 months Old Government having realised its folly in the cancellation of the immediate past Government SCHOOL GOVERNING BOARD Model because of its inability to provide SCHOOL GRANT as at when due has just silently reversed itself,which is applaudable.

Why would the Government not reverse itself, when Schools were unable to print exam questions on papers but rather chose to be writing questions on Blackboard and worse still, the State now made it a policy of giving Publicity to the Pupils receiving REPORT CARDS because the Parents could not receive backlog of Performances of their siblings in School via Report Cards for MANY TERMS under this Government.

The Government of Engr Seyi Makinde assumed Governance in May 29th 2019 and by September 2019 when the Schools resumed for a New Session, they started distributing the TEXTBOOKS printed by the Government of Sen Abiola Ajimobi and we challenged them to show the world the receipt of the Printer that printed the TEXTBOOKS for them.

Till date, they failed to produced the receipt.

Again, the Government of Engr SEYI MAKINDE could not Produce another Sets of TEXTBOOKS.

A Government that had the “MAGIC” of Producing TEXTBOOKS under 3 months of assumption of office cannot replicate such “MAGICWAND”, 28 – twenty-eight months after. AUDIO GOVERNANCE.

The Government of Engr Seyi Makinde claimed to have procured FIRE FIGHTING VEHICLES from Turkey for above one year without functioning.

The AJUMOSE BUSES in the state are due for replacement, Gov Seyi Makinde claimed to have procured some which are only seen when his Party, PDP has assignment outside Oyo State.

The Past Government provided Solar Powered Street lights while GSM chose the “incorruptible” way of replacing them with Diesel Powered Street Lights.

If there is one sector the people of Oyo State are anxiously praying for the fast-tracking of the terminal date of this Government, it is the Security.

Gov SEYI Makinde chose to celebrate his Birthday in Saki, Oke Ogun, what followed is Mayhem of Maiming and killings.

Rewinding to 2020 was sordid as Officers of Nigeria Police serving in Oyo State were killed, roasted and being disgracefully CARNNIBALIZED, with wanton destruction of Police Stations across Oyo State with their logistics vehicles, unreplaced.

Can the people of Oyo State forget the wanton overnight destruction of IGANGAN Town, in Ibarapa axis of Oyo State on the dawn of June 6th 2021, which Gov Seyi Makinde assure the IGANGAN residents of never to happen again but which indeed reoccured within Ten days, on the 16th of June 2021, as if daring Gov Seyi Makinde’s lack of resourcefulness and PROACTIVENESS.

Can the Telephone Handset vendors and Shopping Complex owners at Iwo Road interchange forever forget their losses to the power-drunk PARK MANAGERS, The collaborators with the Government of Engr Seyi Makinde especially the untimely death of one RAHMAN, whose wife just gave birth in United Kingdom (then – June 2021) and was just lucky to be given entry visa to UK to join his wife, but whose life was CUT SHORT in the fracas between Iwo Road Phone Vendors and Shop Owners against Gov Seyi Makinde’s PARK MANAGERS.

Sources had it that RAHMAN was a graduate of LEAD CITY UNIVERSITY, Ibadan.

The Corpse of RAHMAN was taken to the Governors Office by the concerned Sympathisers.

Again, Can the Bodija Market people, Ojoo Market whose buildings were demolished in the early morning COMMANDO Styles, BCOS Staffs whose quarters were just sold overnight to developers forget in a hurry the GSM Government.

Can the residents of Moniya in Akinyele LG Area forget in a hurry, months of siege of the SECURITY lapses which necessitated them loosing their Breadwinners and loved ones.

Many Higher Institutions in Oyo State are crying for the extortion being experienced under Platinum Consultant for bleeding their finances.

The funny 50 years of leasing Agbowo Shopping Complex to nebulous developer for a ridiculous amount of #5bn is a sore on Oyo State landscape that may be hard to heal.

Here was the Gov Seyi Makinde who boasted on May 29th 2019, inauguration address that Oyo State would be exporting Maize and other Agricultural Produce to BOTSWANA.

We are asking how many tonnes of MAIZE shipped to Botswana and how much has that contributed to the finances of Oyo State?

Finally, In August 2012, Arc Musa Muhammed Sada, the then Minister for Mines and Steel Development said, “I was in Oyo State on an Official visit two years ago and as an architect, I must say that I am very impressed by what I have seen.
I have seen a lot of attention being paid to the environment”

In Oyo State today, Gabage and Refuse WAR that were successfully tackled by the Government of Sen Abiola Ajimobi between 2011-2019 has now returned to virtually all the nook and crannies of Ibadan and other towns in Oyo State, No Wonder that CHOLERA Epidemic returned to Oyo State.

Kenneth Kaunda wrote his famous book,decades ago that ZAMBIA SHALL BE FREE and we in Oyo APC are appealing to the good people of Oyo State that, it’s only 17 months more of endurance, OYO STATE SHALL BE FREE.

Everywhere you go now, it is AUDIO GOVERNANCE in Oyo State.

On behalf of the Caretaker Chairman of APC Oyo State, Chief Akin Oke, the State Executives and all the APC members in Oyo State, we wish you all
HAPPY NEW YEAR 2022.

We wish you the very best of luck in all your endeavors.