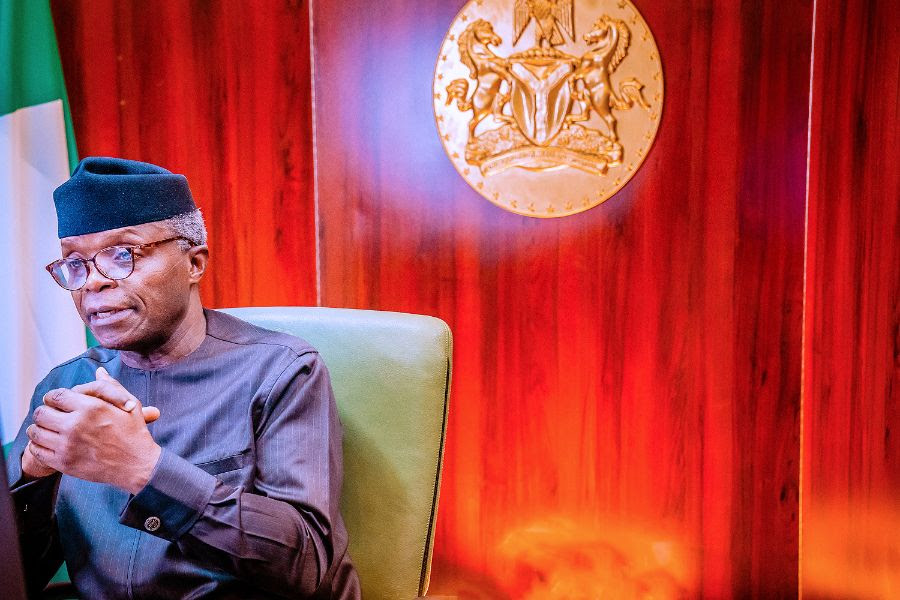 Just like the implementation of the Social Investment Programmes, the Buhari administration has over the years deployed significant resources to address challenges in education and healthcare, in its efforts to address human capital development and related issues in the country, according to Vice President Yemi Osinbajo, SAN.

Prof. Osinbajo stated this Saturday in his keynote address at the Ogbeni Rauf Aregbesola Leadership Colloquium 2021 themed “Government and Big Development: Realities & Solutions for Nigeria”. The event was organized to mark the birthday of the Minister of Interior, Ogbeni Rauf Aregbesola.

Explaining circumstances where governments may need to intervene directly, including in human capital development, the Vice President said “direct state (government) intervention is crucial. You cannot have such conditions (such as in the country) and not have some direct interventions from government.”

His words: “The point is that, for many of the challenges that face a developing economy, there is very little, immediate term profit for private actors in addressing those challenges, but of course, there are huge medium to long term social and economic gains to be reaped.

“In order to fill that gap, government must come in, government must intervene. This intervention in my view, are the issues of big development. How do you educate the largest youth population in Africa? How do you ensure healthcare for that large number of people, and all of the various issues? These are the big development issues that confront us. And we must be able to find solutions to them.”

Making reference to some specific interventions of the Federal Government, Prof. Osinbajo said that “in our first budget, we devoted for N500 billion to our Social Investment Programme. 500,000 young graduates were engaged in the N-Power programme, and 9.5 million children being fed daily in the school feeding programme (just before COVID-19) across 34 States.

“The programme employs 95,422 cooks, and over 100,000 small-holder farmers linked to the programme, supplying locally sourced ingredients. At some point, this translated to 594 cattle, 138,000 chickens, 6.8 million eggs, 83 metric tons of fish, that are procured, prepared, and distributed every week. The higher outcomes for enrollment of pupils in school, retention and performance of students have all been empirically verified.

“There was also the Government Enterprise and Empowerment Programme (GEEP) – TraderMoni, MarketMoni initiatives where micro credits were offered to traders (about 2 million traders in all),” the Vice President added.

He further explained that “these programmes are important because they are in many ways government efforts at directly creating opportunities. A country such as ours clearly require a social welfare programme, a situation where those who cannot work and those who have no work and the vulnerable are provided with one way of earning something and provided with opportunities.”

In the health sector, the Vice President said “since the inception of this administration, we have done a few other direct social investment-type things aimed at human capital development.

“After the National Health Act was passed in 2014, the Federal Government in 2018 began including the 1% minimum portion of the Consolidated Revenue Fund – amounting to N55 billion to fund the Basic Health Care Provision Fund (BHCPF). The Fund is designed to deliver a guaranteed set of health services to all Nigerians, through the national network of Primary Health Care Centers.”

He added The Vice President added that the interventions were in line with the administration’s “commitment of lifting 100 million people out of poverty”, noting that “we recognize the threats posed by social immobility and deprivation”.

He suggested that “we should be training and engaging more teachers, nurses, doctors and several other participants in the public service, and we may end up with more or less the same cost. But my view is that those costs themselves, so long that we are spending them right, so long as they are spent on the right quality of public servants, are costs that we should bear.”

“But we must ensure that we do not allow ourselves to be trapped in a way of thinking that suggests that the problem is really just the cost of governance, so that if we just downsize, everything will be alright. I think the problem is a bit larger than that. I think we have to look at really, the professionalization of our public service, ensuring that we have the right quality of people in the right jobs,” Prof. Osinbajo added.

Commending the efforts of Ogbeni Rauf Aregbesola, as governor of Osun State, and describing him as “a repentant Marxist”, the Vice President said “he stands out as a reason why one should at least have some socialist blood in them while recognizing the fundamental role of markets and the public sector.”

“To a large extent, it is arguable that the social intervention policies he initiated and implemented were largely responsible. The State launched several job creation efforts – Osun State Youth Empowerment Program (OYES) hired about 20,000 young people.

“There was also the school feeding programme, the precursor to our National Homeschool Feeding Programme, serving 155,000 children at inception to over 250,000 children in all 1,382 public elementary schools in the State. 7000 jobs were directly created and 3700 cooks, most of them women. The programme led to an increase of 60% in primary school enrollment and all meals served were from farms and suppliers of food items benefitted from the programme.”