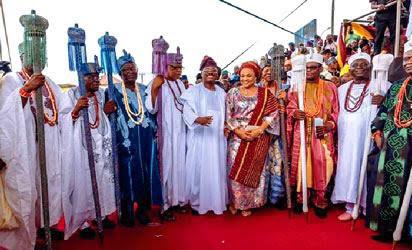 Sons and daughters of Ibadanland and indeed Oyo State have been thrown into deep mourning today with the “ascension to the roof” of Kaabiyesi Olubadan of Ibadan, His Imperial Majesty, Oba Saliu Adetunji, Aje Ogungunniso I, in the wee hours of this morning, Sunday 2nd day of January 2022 at the age 93.

Now that the first class monarch has been buried, the legitimate question on everyone’s lips is “Who becomes the next Olubadan? As easy and simple as this question and even the obvious answer sounds, it cannot but remind us all of Sunday 27th August 2017. That historic and most controversial day in the annals of the culture and history of Ibadanland, Oyo State and i dare say Nigeria.

It was a day that great sons and daughters of Ibadanland came together with a strong sense of patriotism, assembled in the historical, cultural and symbolic Mapo Hall to elevate, to uplift, to transform, to reposition the Chieftaincy Institution of Ibadanland, led by late Senator Abiola Ajimobi, then Governor of Oyo State.

The late Governor went further to declare; “Our administration is not reinventing the wheel, we have simply like others before us, embarked on a review of the Olubadan Chieftaincy Declaration in response to the yearnings of well meaning stakeholders, such as the Ibadan Elders Council, Central Council of Ibadan Indigenes (CCII) and eminent Sons and Daughters of Ibadanland such as Chief T. A. Akinyele, Late Chief Omowale Kuye, the Former Otun Olubadan, all except one member of the Olubadan – in Council who desire to elevate the traditional chieftaincy institution in Ibadanland and position it comparably and competitively amongst other ancient Yoruba cultures who have embraced new and modern systems. They have been truly inspired by the words of Lidia Bastianich when she said ‘Today’s Innovation are tomorrrow’s tradition’.

The event we are witnessing today is also borne out of our administration’s burning desire to redress the lopsidedness in the number of Beaded Crown Obas in Ibadanland vis-à-vis other zones in the state. While some zones have several Beaded Crown Obas, Ibadanland, which is renowned as the Political and Traditional headquarters of Yorubaland, has only one (1) Beaded Crown Oba”

With the 41st Olubadan of Ibadan, Oba Saliu Adetunji joining his ancestors, Ajimobi has been vindicated as there is no myth or mystery on who succeeds the late monarch. It is very simple, clear and logical without ambiguity. Oba Senator Lekan Balogun is the next Olubadan of Ibadan.

The most distinguishing feature of the Ibadan traditional institution remains preserved and sacrosanct which is the point Ajimobi made then.