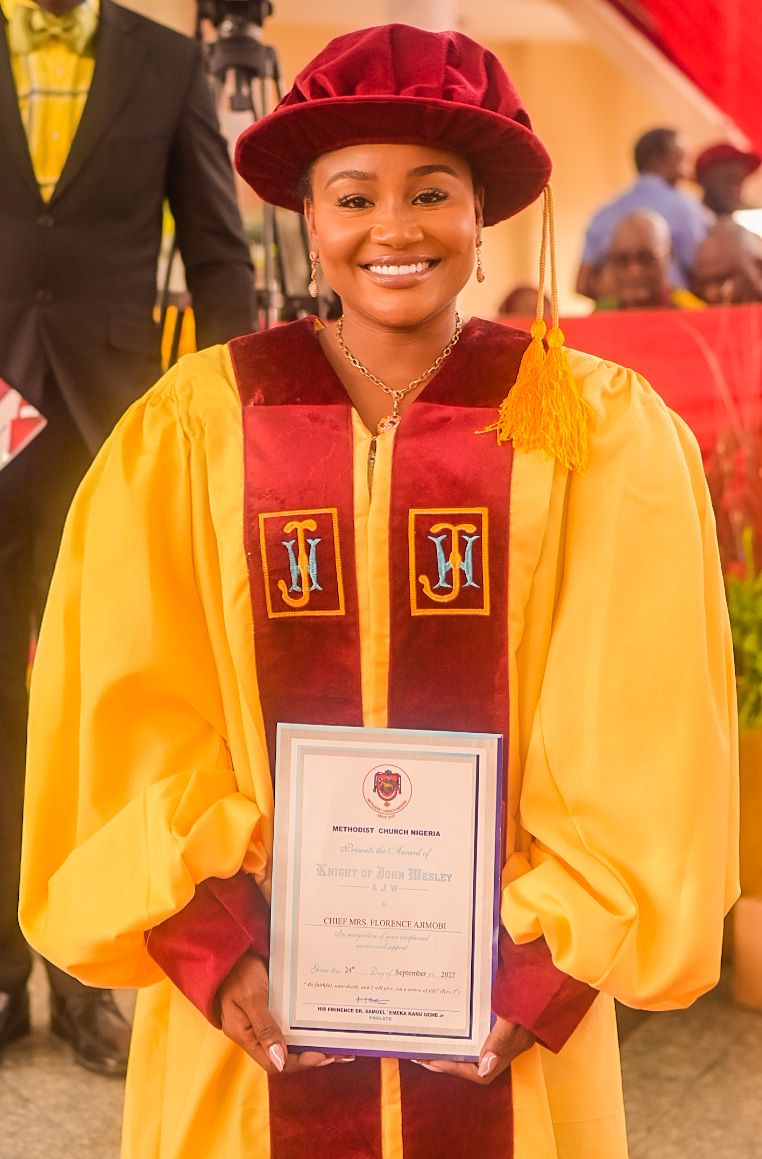 President of the Senator Abiola Ajimobi Foundation (SAAF) and wife of Senator Abiola Ajimobi, former Governor of Oyo State and late Deputy National Chairman(South) of the All Progressives Congress (APC), Dr (Mrs) Florence Ajimobi has been conferred with the Knight of John Wesley (KJW) award.
The award ceremony took place on Saturday at the Freeman Memorial Methodist Cathedral, Badagry, Lagos.

According to the Methodist Church Nigeria, the conferment of the award was approved at the 50th Conference Connexional Council of Methodists Church Nigeria in recognition of her, “ services to the church”, praying that, “God will continue to use you in anymore ways to advance the cause of Christ Kingdom in the World.”

The award was received on behalf of Mrs Ajimobi by her daughter, Mrs Abisola Kola-Daisi.

Responding, Mrs Ajimobi expressed deep appreciation for being conferred with the prestigious Knight of John Wesley (KJW) award. “I am especially elated that the Methodist Church has found me worthy of this award that is only bestowed on, ‘devoted, committed, spiritual, faithful, liberal, peace and loving ardent defender of the Christian faith and promoter of the Wesleyan heritage”, she said.

According to her, the Knight of John Wesley award has retained its integrity in a society where awards have become two-a-penny, as it continued to be bestowed on worthy individuals who have contributed immensely to upholding the integrity that John Wesley, founder of the Methodist movement stood for.

“In his life time, John Wesley stood for certain ideals, chief of which was that every one has equal opportunity of being saved through faith in Christ, consequently I have set for myself the task of working for the kingdom of God”, she said.
She vowed to continue to devote herself to the ideal of John Wesley.

“It is a personal commitment and irrespective of impediments, my sights are set firmly on the goal of winning souls for Christ. This award is thus a motivation to do more.

“On behalf of myself and family, I want to once again express my sincere appreciation to members of the Conference Connexional Council of Methodist Church and the entire Methodist family in Nigeria. I pray for more of God’s blessings to you all”.