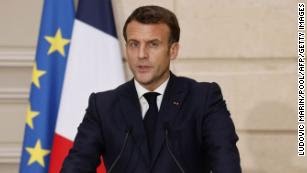 French President Emmanuel Macronwas slapped in the face by a man in a crowd — who yelled “down with Macron — as he spoke to the public during a visit to southeast France on Tuesday, video of the incident posted on social media showed.

The footage, shared by CNN-affiliate BFM, showed Macron walking up to a metal fence and clasping the arm of a man in the crowd as he began to greet onlookers.

The man, while gripping Macron’s arm, then slapped the president across his left cheek.

Macron’s security detail quickly intervened, tackling the man while pulling the president away from the metal barrier.

Macron was in La Drôme to meet restaurant owners, ahead of Wednesday’s easing of Covid-19 restrictions in France.

“A man indeed tried to hit the President of the Republic,” the Elysee said in a statement to CNN. “We have no further comments at this point. Exchanges with the crowd and handshakes resumed. The trip continues.”