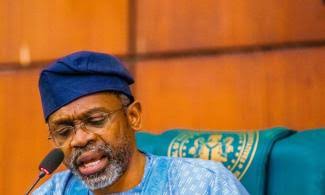 What else can adequately describe the Speaker of the House of Representatives, Rep. Femi Gbajabiamila’s compassionate character than the Yoruba proverb Ìwà kì í fi oníwà sílẹ̀? It simply means that we are inextricably linked to our personalities. When a man has a heart of love, his whole life is dedicated to service to humanity.

Just a few weeks ago, Speaker Femi Gbajabiamila took it upon himself to initiate the mediation process between the Academic Staff Union of Universities (ASUU) and the Federal Government, aimed at bringing the 8-month-old strike action to a halt.

As a lawmaker, his primary role is to represent the people and make laws for good governance. But in his heart, the passion for improving education led him to step in as a mediator, which eventually resulted in President Muhammadu Buhari, among other demands, approving 470 billion naira in the 2023 national budget to meet some of ASUU’s demands for tertiary institutions.

From the 470 billion, 170 billion is for salary increment and 300 billion is for the revitalization of tertiary universities. It is no wonder the students now call him the “Father of Nigerian Students.”

Many who have come across Speaker Femi Gbajabiamila either in person, on social media or in traditional news media know very well how much he has dedicated himself to his political slogan, ‘Nation Building: A JointTask.’

How else can one characterize a person who was best equipped to serve as the most significant speaker in Nigerian history than by the biographical recollection of Dr. Jerry Ogukwe, who was a two-time House of Representatives member and former Ambassador to Austria?

He stated that during their years together at Atlanta’s John Marshall Law School in Georgia, Gbajabiamila told him about his vision and plans to return to Nigeria to serve Nigerians. That was in the late 1990s.

Starting from his days as a first-time lawmaker in 2003, through the ranks as a Minority Whip, House Minority Leader, House Majority Leader, and now as Speaker of the 9th House, he has remained consistently zestful about the plight of the average Nigerian, particularly young people.

It is as a result of his outstanding accomplishments that the late Alaafin of Oyo, HRM, Lamidi Olayiwola Adeyemi III, gave him the title of Aare Baasofin of Yoruba Land (the Supreme Legislative Guide for Yoruba Land).

It is also as a result of his immense contribution to nation building that President Muhammadu Buhari conferred on him the title of Commander of the Order of the Federal Republic.

Speaker Femi Gbajabiamila, through the interest free Students’ Loan Bill, has shown interest in making an enduring law to support the development of students who are not financially buoyant to further their tertiary education. The bill is now in the Senate.

His passion for the empowerment of Nigerian children through sound competitive education did not start with the ASUU intervention. Aside from the previously unpublicized countless scholarships to indigent and exceptional students, Gbajabiamila took it a step further by mentoring and inspiring Nigerian children through his Gbaja Teaching Initiative.

This initiative has taken him around secondary schools in Nigeria, teaching and inspiring the children on the need to focus on what they want to become.

Within three years as Speaker, he has built ICT centers and organized bootcamps for students, donated free Wi-Fi to tertiary institutions, built sports centers, and empowered young people with hundreds of cars and school buses. All of these are geared toward making learning easy and enjoyable for the Nigerian child.

Many far-reaching and enduring youth empowerment laws aimed at making learning better can be traced to Speaker Femi Gbajabiamila.

It’s no surprise that the Lagos branch of the Nigerian Union of Teachers recently bestowed upon him the Outstanding Supporting Personality for the Education Sector Award.

As the representative from Surulere and the number four citizen in Nigeria, the impact of his projects and diplomatic interventions is felt in Lagos, Nigeria, and abroad.

From boardroom meetings to the streets, the man of the people, Rep. Femi Gbajabiamila, exudes conviviality, intelligence, diplomacy, humility, and a sense of humour that lightens up the room.

Gbajabiamila is a man who leads with his heart, and as a result, he’s the most consequential Speaker in the history of Nigeria.