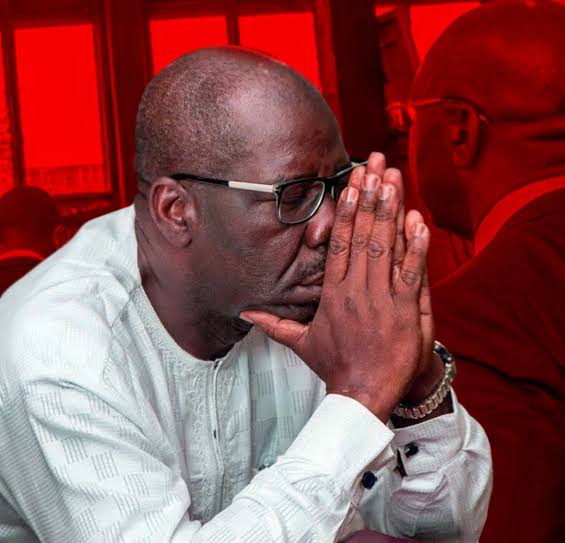 While inaugurating the Edo State chapter of the already-destined-to-fail Peoples Democratic Party’s Presidential Campaign Council yesterday in Benin, the underperforming, ever loquacious Governor of Edo State, Godwin Obaseki betrayed his oath of office by wishing for the break up of our country because of his brand of crass partisanship.

Obaseki told his band of jesters that Nigeria will break up if our party, the All Progressives Congress wins the 2023 presidential election which our candidate, Asiwaju Bola Ahmed Tinubu is primed to win as the best among the candidates seeking the mandate of Nigerians.

Asiwaju Tinubu and his running mate, Senator Kashim Shettima have demonstrated their combined capacities and competencies as Governors of Lagos and Borno States where they both provided purposeful and transformational leadership. The footprints of their achievements and legacies in public service continue to stand the test of time having engineered the emergence of worthy successors, who have continued to raise the bar in service delivery in the two states they proudly governed.

For a man who swore an oath of allegiance to the sovereignty and unity of Nigeria to be a purveyor of ill-will towards the same country because of partisan politics smirks of total irresponsibility and recklessness unbecoming of a governor who has a constitutionally sanctioned duty to preserve the unity and indivisibility of Nigeria.

It is worth stating that we are are not in any way surprised about Obaseki’s outburst about Nigeria’s breaking. He is, by nature, a divisive, obnoxious and toxic human being that lacks introspection and contemplation expected of a person occupying the office of a governor. He is obviously a man bereft of any iota of emotional intelligence and perhaps a misfit for the role he currently occupies.

At his ill-fated event in Benin yesterday, Obaseki also repeated the earlier false claim he made in April 2021 on Nigeria’s debt and his accusation that CBN was printing money to share directly to state governments, as if state finance commissioners hauled the billions of naira that is due to them by cash from Abuja every month. Only a disconnected and diseased mind could imagine this scenario that Obaseki concocted. The Minister of Finance and Economic Planning, Mrs Zainab Ahmed and CBN Governor, Godwin Emefiele debunked his lies in a manner that portrayed him as a nitwit, cheap liar and busybody who was just playing to the gallery. What a pity for a man who claimed to have financial background.

It is worth stating that the CBN has never printed money to pay Federal Allocations to states as claimed by Obaseki.
This much was publicly stated by the Governor of CBN and Minister of Finance. In any case, there is nothing strange or unusual in a sovereign nation printing money when it has to be done because it is one of the core mandates of Central Banks all over the world as lender of last resort. Nations embark on such moves when they are in difficult fiscal situation, as the whole world has been confronted with since 2019 with Covid-19 pandemic that put the global economy on tailspin. Everyone is aware that sovereign nations had to do what they needed to do in response to an existential crisis as COVID-19 ravaged economies, shut down factories and companies. The crisis made farmers lose a season or two of cultivation and crops rotted in farmlands as farmers could not reach shut markets. Global value and supply chains were disrupted entirely, with shipping costs tripling as a result.

While playing his politics without honour and integrity, Obaseki didn’t remember to tell his crowd that Edo State benefited and took advantage of all the CBN/FGN windows and interventions via loans, restructuring of loans. The policy has helped to save his state and other 35 states from economic cataclysm because of their terrible fiscal positions, which made many of them unable to pay salaries and pensions for months.

This same Obaseki, along with other governors under the banner of Nigerian Governors’ Forum, has been putting pressure on CBN and Minister of Finance for more moratorium on their due obligations to CBN.

We advise Obaseki to stop his scaremongering and concentrate on how to save his faltering, failing, disconnected and unpopular Government in Edo State. He should stop abusing his office and stooping so low into the dirty gutter of bitter politicking and crisis-baiting. After more than 5 years in office, Obaseki does not have any landmark achievement in Edo State other than paying those on whose shoulder he rose to political relevance in Nigeria with evil. One of his mentors, the energetic Governor Nyesom Wike has expressed the deepest regrets in ever helping Obaseki to retain power in Edo State.

It is quite amusing when Obaseki said PDP and its presidential candidate, Atiku Abubakar will rescue and rebuild Nigeria. We want to ask them how? How can the same people that destroyed the country and created the mess which the APC-led Administration of President Muhammadu Buhari is working day and night to clean up, rescue Nigeria? It is the height of absurdity that Obaseki would recommend to reasonable Nigerians that his party could add new value to Nigeria after it superintended over the looting of over $5b in arms procurement contracts when Boko Haram ravaged the country. How can a party that has failed to build its National Secretariat in 16 years despite raising over N26billion build anything, including our nation?. And of course, nothing is expected from the same people who wasted $16billion to procure darkness for Nigerians in 16 years.

Obaseki should know by now that Nigerians do not want to have anything to do with his party and Atiku. And the signs are there for all to see: Obaseki’s PDP cannot even rescue itself from internal implosion.

Nigeria remains secure in the hands of our party APC. And the future is even brighter with Asiwaju Bola Ahmed Tinubu and his running mate, Senator Kashim Shettima.

Their candidacy has brought RENEWED HOPE across the country. We believe Nigerians will invest their trust in our party and a renewed greatness is our destiny.

Previous Posts Nlemchukwu Godswill Onyedikachi Bags Youth Ambassador and Young Entrepreneurs of the Year Award*
Next Posts Why always him?". A rant by a Nutty Professor. | By Ayekooto Akindele