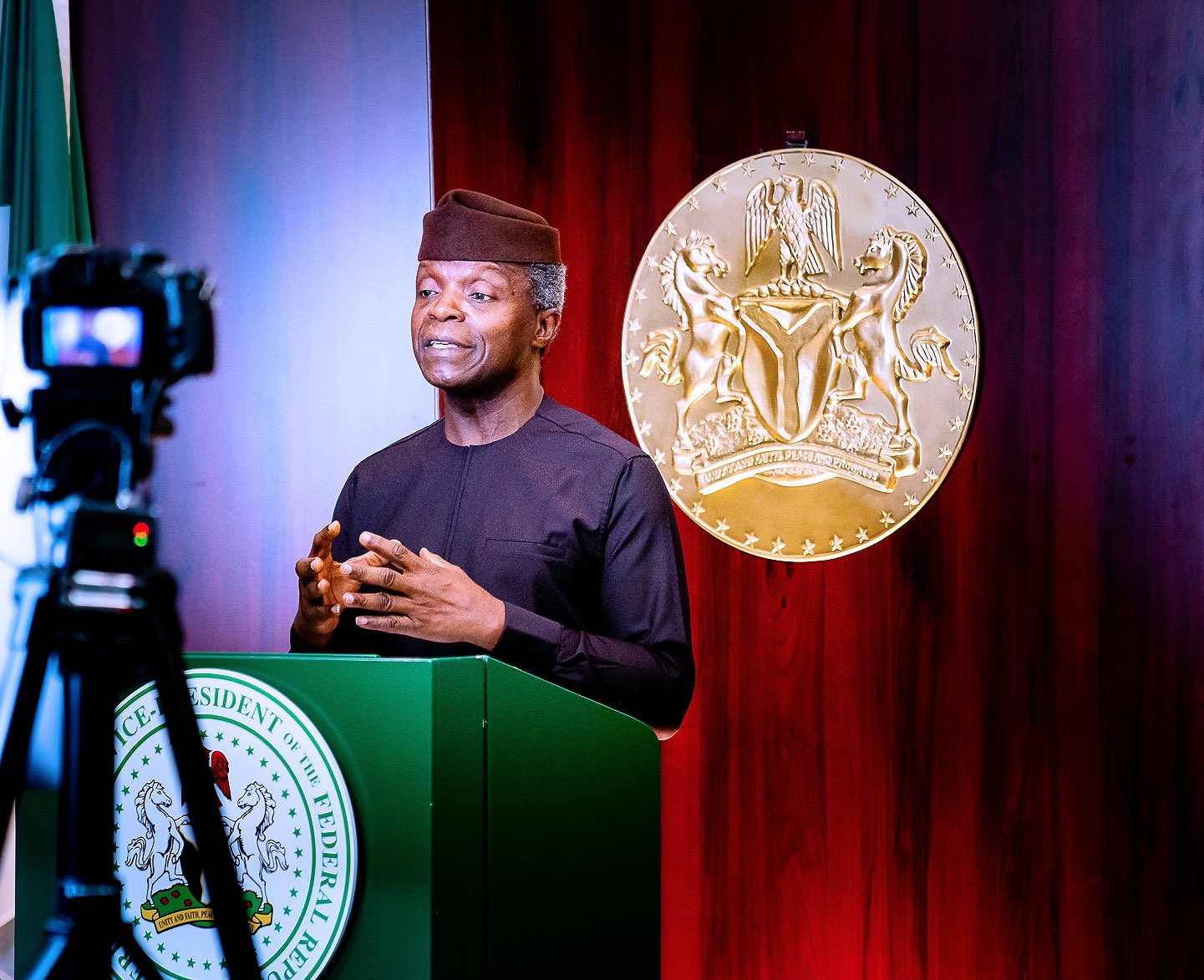 Says FG can’t grab land from state for herdersVice President Yemi Osinbajo has restated the need for state Police to curb the worsening security situation in the country.

The Vice President also said that the way out to the perennial crisis between farmers and herders, was the implementation of the National Livestock Transformation Plan (NLTP), as developed by consensus of governors under the auspices of the National Economic Council (NEC).

Prof Osinbajo stated this at the opening session of an International Conference on Patriotism, Security, Governance and National Development.

He said that the task of building a society desired by all Nigerians is exerting and requires the contribution of all Nigerians as the challenge for everyone is “to build, not to destroy, and to add to, not to take away,”

The event was organized by the Global Patriot Newspaper in collaboration with the Nigerian Consulate in New York and Nigeria in Diaspora Organisation, (NIDO) New Jersey Chapter.

Speaking on the need for citizens to unite in building a better society, the Vice President said “the task of nation-building is exerting and may even appear messy as the process continues, especially in a multi-ethnic and multi-religious nation like Nigeria. It challenges all values, patience and tolerance of citizens, it may even be costly. It is a challenge thrown to everyone, to build, not to destroy, to add to, not to take away.”

While addressing security concerns, the Vice President restated his advocacy for the decentralization of the Police Force.

According to him, “we must accept that there is a need for greater decentralization of the police force. I have been a frequent advocate of state policing and I believe this certainly must be the way we must go.

“The National Assembly is in a position to consider some of the proposals that have gone to them for the purposes of devolving more powers to the states for security purposes and for addressing the security challenges.”

On the steps taken to address the perennial crisis between farmers and herders, Prof. Osinbajo said the Federal and State governments are committed to the implementation of the National Livestock Transformation Plan (NLTP), as developed by consensus of governors under the auspices of the National Economic Council (NEC).

Explaining the initiative, the Vice President said “the NLTP is a comprehensive strategy for addressing farmer/herder conflict essentially by encouraging interested states to establish cattle ranches.”

“The crucial point here is that no community or State is compelled in any shape or form to give land for ranching. Ranching is essentially a business. NLTP is not a land grab in any way. Every state is completely responsible for its land. The Federal Government cannot go to any state and take any land.

Already 22 States have indicated interest and pilots, with the support of the Netherlands government, are ongoing in 4 states of Adamawa, Nasarawa, Plateau and Gombe.

“If we are able to execute the NLPT, we will be able to see an end to the farmer-herder conflict because the goal is to make livestock breeders more sedentary and derive more financial benefits,” the Vice President added.

Other participants at the meeting were Nigeria’s Permanent Representative to the United Nations, Prof. Tijjani Bande; President of NIDO, Dr Kazeem Bello; Femi Falana, SAN, among others.