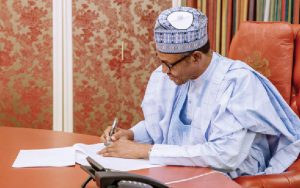 He gave the order at the State House, Abuja, when he received governors of the states that make up the commission, led by former Governor of Bayelsa State Seriake Dickson. The president said what is presently on the ground in the South-south region did not justify the huge resources that had been made available to the organisation. “I try to follow the Act setting up these institutions, especially the NDDC.

With the amount of money that the Federal Government has religiously allocated to the NDDC, we will like to see the results on the ground; those that are responsible for that have to explain certain issues. In pursuant to this, the Federal Executive Council (FEC), last Wednesday, approved a contract of N318 million to engage the firm of Olumuyiwa, Bashir and Co. Ltd as Lead Consultant for the forensic audit of the NDDC.

The Minister of Niger Delta Affairs, Godswill Akpabio, who briefed journalists after the FEC meeting at the State House, said the Interim Management Committee (IMC) of the NDDC would collaborate with the lead consultant. He said, “Of course, it’s as a result of the fact that we have not had value for the money expended in that commission since inception.”