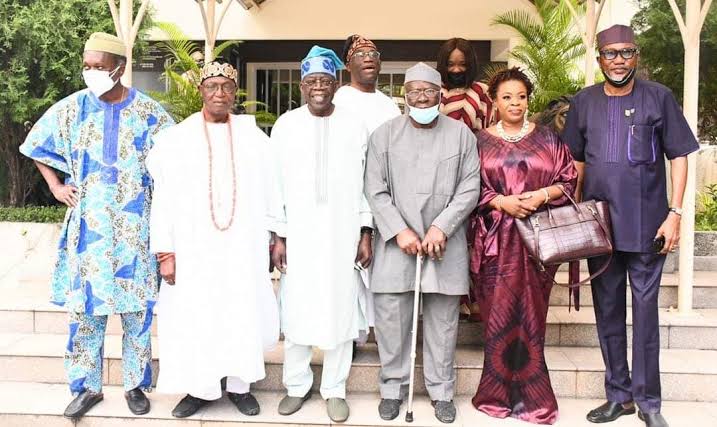 Reports today suggested that the pan-Yoruba socio-political group, Afenifere, has distanced itself from the presidential ambition of APC National Leader, Asiwaju Bola Ahmed Tinubu. Sadly, it appears we will not be on the same page about this. The Afenifere Movement Ijebu East Local Government is fully committed to the aspiration of Asiwaju.

Tinubu has his faults. No doubt about this at all. But, we, as humans too, also have many flaws, as only Olodumare is perfect. For us, the situation in Nigeria today is almost like that of the 2nd Republic. Late Chief Obafemi Awolowo had Alhaji Lateef Kayode Jakande and late Chief Bola Ige to contend with towards the 1983 presidential election. Many, till date, still believe LKJ was cursed by Great Awo for allegedly making efforts to unseat him as Leader in order to become President. Some even claim LKJ made moves to trace his ancestry back to the Middle Belt in order to appease the Kaduna Mafia at the time.

We believe that if, eventually, the APC presidential ticket is allotted to the South-West, Asiwaju Bola Ahmed Tinubu remains the only Yoruba Leader, who can muster the resources that a Great Awo or MKO Abiola would have gathered for the position. He does not need any introduction in any part of Yorubaland or Nigeria for that matter. He has old political debts/alliances in almost every part of the country, which he could deploy to ensure he emerges victorious in the 2023 presidential election.

No doubt, Vice President Yemi Osinbajo, by virtue of his position and his place among Pentecostal Christians across Nigeria, also stand in very good stead to contest for the same position. Our position remains that Tinubu is the ONLY one, who can wield more than enough clout to make a success of his candidacy if given the ticket. We do not believe there is a Yoruba politica Leader alive today, who can measure up to Tinubu in terms of what MKO Abiola did in appealing to the other parts of the country for acceptance towards the 12 June 1993 presidential election.

Of course, Tinubu can decide to back Osinbajo or any other protégé. Should this happen, the individual so picked will run on Tinubu’s engine to emerge victorious. So, those making efforts to run Tinubu down should go back to what MKO Abiola used National Concord among others for. Great Awo was labelled a thief and a person not to be trusted with power. Saints hardly get involved with politics, because they are all in heaven. And, here on earth, especially Nigeria, we need men and women with vision to move this country forward no matter the alleged sins they may have committed in the past.

We will stand with Tinubu, no matter the level of his alleged sins. We’ve passed through this road before. This time around, we’ll not allow old animosity to truncate another opportunity at redressing years of rot in the country to pass us by. Tinubu has what it takes to turn Nigeria around. Either directly or through a protégé, we sincerely believe he is the man destined by Olodumare to take us to The Promised Land.

On Tinubu’s Mandate we shall stand!