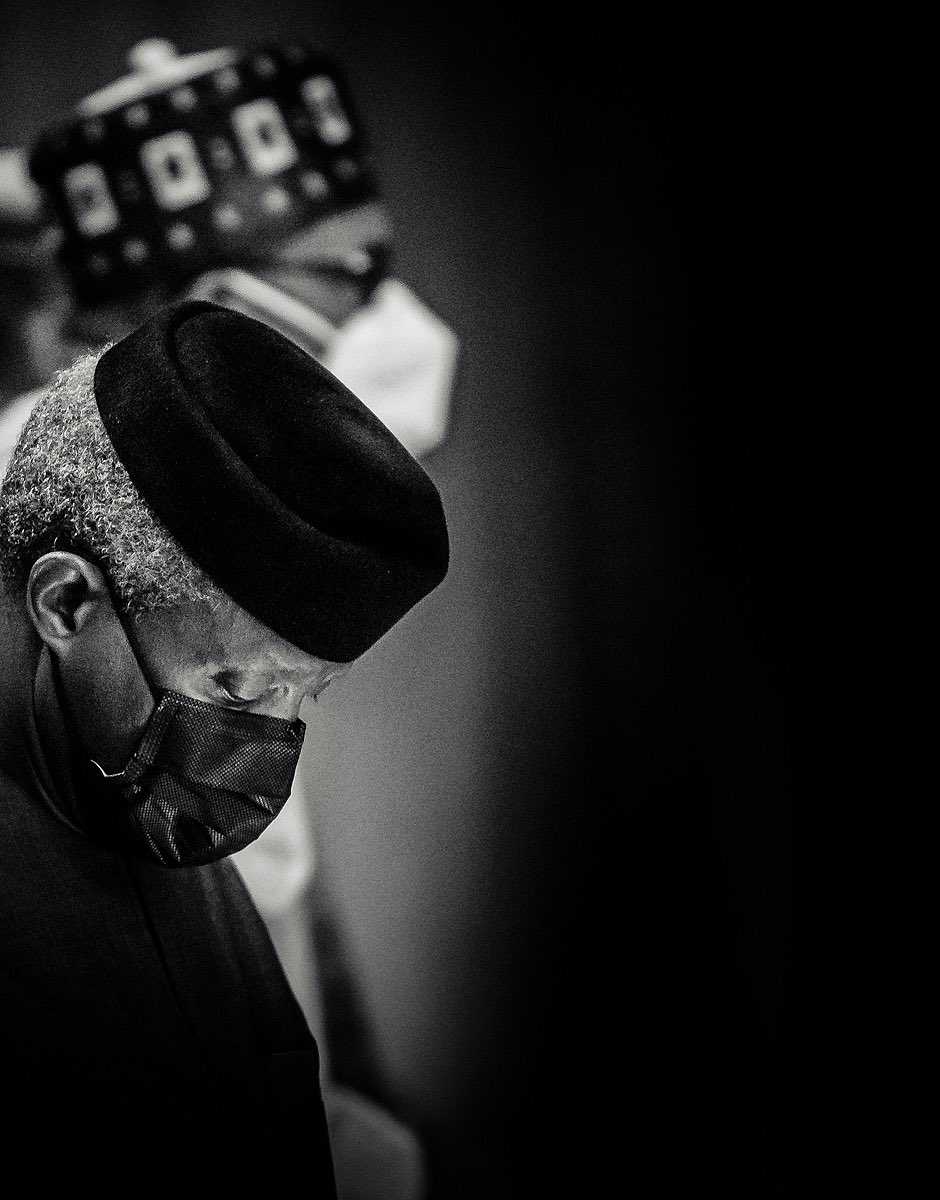 Sobriety – if not austere aloofness – would ordinarily appear the chief trait that defines a varsity professor.

This probably explains why far less public attention is paid to his other proficiency: master of spontaneous humor.

Answering a question during a campaign town-hall meeting in Benin City in 2015 ahead of the March 28 presidential elections, petite vice presidential candidate Yemi Osinbajo literally brought down the roof by describing himself and gangling General Muhammadu Buhari as “the long and short of the matter”.

Such witty facility was again very much on display years later during a gala night hosted in Port Harcourt by the Rivers State Government in honour of visiting Vice President.

During the event, which has since been entered as part of Nigeria’s social media’s folklore, popular comedian, Klint Da Drunk, had sought to blackmail the guest after handing him N5,000 by quoting the Bible that “When you give, you’ll receive back, full measure, pressed down, shaken together and running over.”

Well, the solicitous comedian didn’t have to wait for too long to confirm his lottery. The Vice President soon replied him thus: “Everything has been going well until Klint Da Drunk gave me an expensive N5000. I’ve kept it close to His Excellency, the Governor (Nyesom Wike), in case he asks for it back because he can say that ‘I was drunk when I gave you the money’.

I must remind him that the scripture that he referred to which suggests that if you give, you’ll be given more, is when you give to God and not to an Ijebu man.”

The hall erupted in rapturous laughter.
Of course, in Yoruba-speak, parsimony is thought to be cultural to the Ijebu.

No less memorable was Professor Osinbajo’s masterclass at the state banquet held to mark the nation’s 58th independence anniversary in 2018. That night, guests were held spellbound as the Vice President gave a command performance in stand-up comedy on “Nigerian Swag” with the virtuosity only a few among even professional comedians could have mustered.

For several minutes, the high-ceilinged banquet hall at Aso Rock literally quaked with delirious laughter, passed on to several millions of viewers at home through the live telecast of the event.

It was a chronicle of the dancing skills of some of Nigeria’s political and business leaders, backed with videos.

“No one dances like us,” he started by teasing sarcastically. “It doesn’t matter whether you’re the distinguished senator representing Kogi West or the distinguished senator representing Osun west.”
What began as knowing giggles across the gallery soon exploded into a big laughter when the giant screen on cue showed Dino Melaye and Ademola Adeleke gyrating giddily, as usual, in flowing Agbada to Sunny Ade’s music. Followed by Aliko Dangote’s own swing in business suit. We also saw a clip of President Buhari’s rare public dance – a shy shuffle – in response to some praise-singing at a campaign rally. Followed by ex President Olusegun Obasanjo’s wild z-zag that appeared completely out of tune with the drumbeats.

Indeed, Prof’s capacity to give is evenly matched by the ability to receive. When, for instance, Governor Nasir El Rufai of Kaduna named him as the “President of Short Peoples Association of Nigeria” and Adams Oshiomhoke as PRO at a public event, the television camera caught him laughing heartily.
But joking is only a pastime. Only when the Vice President steps onto the lectern in the lecture circuits or chairs a typical executive meeting are folks reminded of the profundity of his thoughts. Just above that facade of geniality and conviviality surely towers a prodigious mind equally at ease with the most complex ideas and turgid concepts.
Such duality of gifts – being free without being loose, to be simple yet profound – is what ultimately defines the enigma of Professor Yemi Osinbajo and distinguishes him as arguably one of the few most engaging leaders in the nation’s history.

Which partly explains why he is widely hailed as “Starboy” today. Through him, we learn elegance in simplicity; and that ideas, while being easily accessible, can still be profound without being pedestrian.

Rigor is simply second nature to him. As close aides will attest, no one is ever sure of the final draft until Oga had finished speaking. Even while the event has started, he often continues to wrestle quietly with the speech on his I-pad, sometimes updating and clarifying the copy in light of matters arising, until invited by the master of ceremonies to speak.
Such is the intensity of his sense of spontaneity and clinical attention to details.

As he turns 64, Prof surely means different things to different folks. To the immediate past Emir of Kano, Muhammad Sanusi (Sarkin Kano), he “has remained humble, caring, forgiving, honest and loyal”. Scholar and gifted international orator, Professor P.L.O Lumumba, had this to say on the occasion of his 63th birthday: “Men invariably rhapsodize fellow men in death and vilify them while alive. I choose to lionize you for your contribution to Nigeria and the world.”

According to Mrs. Ibukun Awosika, Chairman of First Bank: “An excellent child of God, an excellent leader in character, integrity of purpose and diligence in his assignment and so much more.”
Hear Dr. Ola Brown, CEO of Flying Doctors: “I’ll like to really thank him for inspiring every young person in Nigeria.”

Varied as perceptions of Prof might be, there is however one point almost everyone is agreed: he brings scholarly anchor and clarity to bear in policy formulation and execution by the administration.

Indeed, long after the Abuja bureaucrats had closed for the day, the No. 2 citizen will often be found dissecting files in late hours in the halo of reading lights in the office, pince-nez balanced precariously on his nose’s tip.

Those who, therefore, measure the stress of office by how rapidly his hair has turned grey may not be too far off the mark.

Nowhere is that brilliance and diligence more poignant than in his leading the team that fashioned the economic blueprint that bailed the nation out of a crushing recession, far earlier than projected by financial experts.

Frighteningly enough, the 2020 recession descended barely two years after the nation limped out of an “economic pestilence” inflicted by the steep crash in global commodity prices in 2014/15, described as the “worst since 1982”.

In conception and execution, ESP followed the Keynesian model propounded by British economist, John Maynard Keynes, following the Great Depression of the 1930s.

In short, ESP set out to reflate the economy aggressively by putting money in people’s pocket through a variety of measures ranging from cash handouts to the most vulnerable to soft loans to small and big businesses.

It is a measure of the efficacy of its prescription and a great tribute to the leadership provided the economic team by the Vice President that Nigeria’s economy recorded a marginal recovery of .11 percent growth for the last quarter of 2020, having suffered negative growth in the two preceding quarters consecutively.

Indeed, miracles don’t happen in economics; the trophies are earned. Clear-thinking must be backed up with scrupulous execution and diligent follow-up.

Why Nigeria’s recovery is particularly significant is that it came when almost all the big economies around the world (except China) are still in severe dire straits caused by C-19 pandemic, with many thinking their earliest possible date of recovery will be next year.

In a way, ESP’s relative success must be bad news to Prof’s traducers who had interpreted the setting up of the presidential economic advisory council in October 2019 as a diminution of his powers as the statutory head of the national economic council, blissfully ignorant of the uncommon chemistry between the President and his deputy.

Rather than be distracted, the Vice President simply kept his eyes on the ball, thus demonstrating practically that nothing could come between him and his boss as far as achieving the administration’s objectives is concerned.

On a final note, a character sketch of Prof will be incomplete without due reference to his instinctive compassion. While visiting blighted communities in insurgency-ravaged Borno early in the life of the administration, he was sufficiently moved enough to personally undertake the mobilisation of funds thereafter from friends to set up a charity body devoted entirely to taking care of orphans.

The initiative is called North-East Children Trust (NECT) and has been involved with establishing learning centres providing comprehensive support to children between ages of five and eighteen years made vulnerable by the conflict in the North-East.

When in March 2020 the outrider of his motorcade, Inspector Ali Gomina, died in a fatal accident on the road to the Nnamdi Azikwe International Airport, Abuja, the distraught Vice President instantly cancelled the trip and personally visited the deceased’s home to console the family he left behind.

Six months later, he fulfilled his promise by handing over the keys to a brand-new bungalow he built for the grieving family in their community, Gui, in the Abuja Municipal Area Council of the Federal Capital Territory. The community also received a gift of six blocks of classrooms.
Happy birthday!, Prof.

Mr. Odion is Senior Technical Assistant on Media to the President.

Previous Posts VP. Osinbajo: Christians Must Be Purveyors of Justice, Voices of Peace
Next Posts Insecurity: State Police Is Way Out — VP. Osinbajo