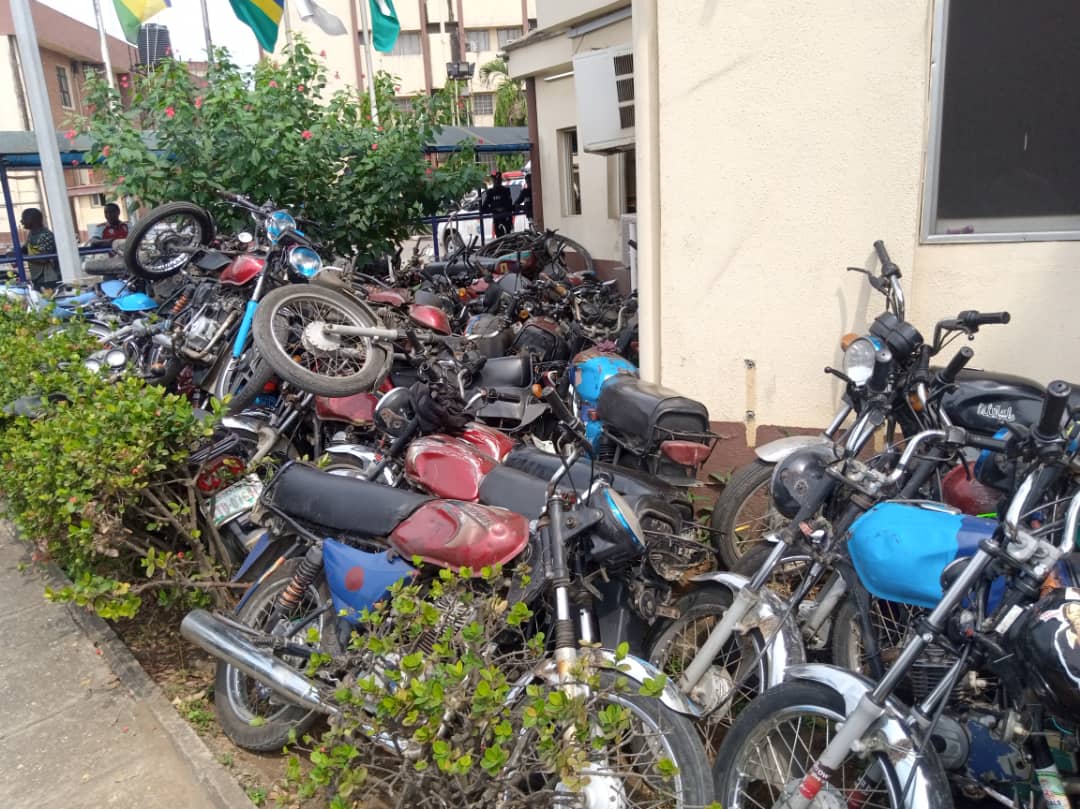 The Lagos State Police Command has again directed its operatives to go after unregistered vehicles, vehicles with covered numbers plates, fake number plates and unauthorised use of siren in the state as the operstives of the Response Squad (RRS), a unit of the Lagos State Police Command, on Friday 8th January, 2021, impounded three (3) vehicles for covering their number plates and forty three (43) motorcycles for plying prohibited routes in Alausa Business District, Ikeja.

The Commissioner of Police, Lagos State, CP Hakeem Odumosu, had warned vehicle owners against these acts of illegality towards the end of year 2020 as a result of the intelligence gathered on the planned usage of these categories of vehicles and motorcycles for committing crimes in the state and beyond.

In compliance with the order, police operatives in the state have been on the prowl of violators who are fond of using unregistered vehicles, covered and fake number plates, unauthorised use of siren or revolving light etc with many of them prosecuted and fined accordingly.

The Commissioner of Police, CP Hakeem Odumosu, while reaffirming his zero tolerance for traffic offences and the like, ordered the Commander RRS, CSP Yinka Egbeyemi to intensify efforts in impounding any vehicles/bikes found wanting in this regard. CP Odumosu however expressed shock at the volume of vehicles violating these order in the state and motorcycles prowling Alausa Business District, which are prohibited routes for bikes.

During the sting operation organised by the command, which was commanded by CSP Yinka Egbeyemi, to kick against these offences, the command siezed the opportunity to advise Lagosians to desist from such illegality. The command also warned Governments workers, who encourage commercial motorcycle riders to flout the rules on prohibited routes to desist forthwith, pointing out that the squad had the directive of the Commissioner of Police to impound such bikes and prosecute both the riders and passengers.

The Commissioner of Police Lagos State has however ordered that the three (3) vehicles and 43 motorcycles impounded be transfered to Lagos State Taskforce on Environmental Offences without delay for prosecution.

In another development, the zeal of the command to curtail traffic robbery in Lagos State paid off as the RRS men on decoy operation along Ogudu/Alapere Expressway on Saturday 9th January, 2021, arrested two (2) suspected traffic robbers.

The police chief in Lagos State, Hakeem Odumosu, has oredered that the suspects be transferred to State CID Panti, Yaba, for proper investigation.