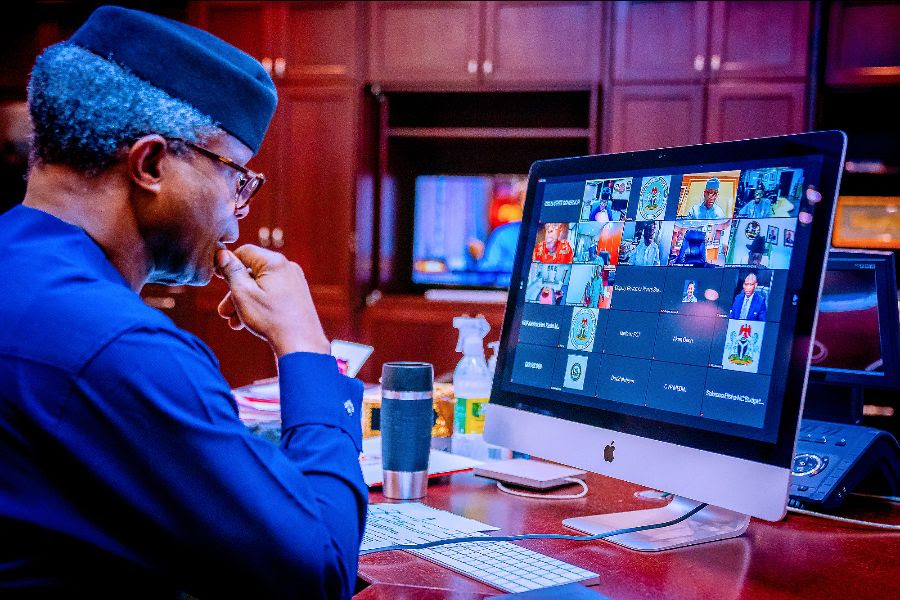 Welcoming recommendations of a national townhall meeting on Enhanced Security and National Unity recently held in Kaduna, the National Economic Council (NEC) rose from its monthly meeting today strongly affirming the unity of the country, emphasizing that staying as one country remains the best option for Nigeria.

The Council’s position was among resolutions adopted at the 4th 2021 meeting of NEC, chaired by Vice President Yemi Osinbajo, SAN, which also had in attendance State Governors, FCT Minister and the Central Bank Governor. Also at today’s meeting were the Finance, Transportation, Information, Aviation and Water Resources Ministers, and the Minister of State for Budget and National Planning.

While emphasizing the need to address the problems of agitation in parts of the country, Council noted that “these agitations are common with countries with huge and diverse populations like ours and it is important not to allow the minority to highjack the mainstream of opinion.”

The Council also directed States “to hold consultations and dialogues on the issues and report back by the next meeting of Council so that a firm position would be taken on the recommendations of the Townhall many of which it already welcomed.”

NEC urged all States (even where there are no agitations) to hold wider consultations to have diverse opinions on the burning issues, taking into consideration local peculiarities and report back to NEC the outcome of the consultations.

The Council resolved that after the planned State-wide consultations a national consensus would be reached on the recommendations of the national town hall meeting held in Kaduna which included the adoption of State Police among other matters.

Taking a position on the alleged printing of N60 billion after receiving presentations from the Minister of Finance and the Central Bank Governor, the National Economic Council (NEC) stated that the claim as reported in the press is outrightly false, affirming that no money was printed to shore up allocation for the month of March.

The Governors, having critically reviewed the matter, unanimously expressed satisfaction with clarifications made by the NGF represented by its Chairman, Governor Kayode Fayemi of Ekiti State, Finance Minister, Hajiya Zainab Ahmed and the Central Bank Governor, Mr Godwin Emefiele. While the Finance Minister categorically debunked that Naira was printed to back up allocation last month, the CBN Governor fully supported the position of the minister, and the Chairman of NGF also noted that he knew no such thing happened at all.

BUDGET AND NATIONAL PLANNING MINISTER TO BRIEF ON FINANCE UPDATES:

The Minister of Finance, Budget and National Planning gave update to Council on the under listed accounts as follows:

BUDGET SUPPORT
On the budget support facility, Finance Minister observed that the deductions for repayment by States are meant to resume in May. The Governors however requested for an extension considering the economic challenges in the States.

The Central Bank Governor explained the technical challenges involved should there be a further postponement of the deductions. The Vice President then directed that a meeting be held soon after today’s NEC where the issue would be properly considered and a decision reached.

The VP will chair the meeting and the Governors would be represented by Governor Kayode Fayemi, while the Finance Minister and the Central Bank Governor both of whom attended the meeting today will also participate.

Council also received a presentation on the current status of water, sanitation, and hygiene services level across the country as revealed by the 2019 WASH National Outcome Routine Mapping (WASH-NORM II) survey jointly carried out by the Federal Ministry of Water Resources and National Bureau of Statistics in collaboration with UNICEF.

On access to sanitation, indicators across the country show a slight improvement as 44% of the population were found to have access to basic sanitation services in 2019 compared to 42% in 2018. Only 17% of the population use improved sanitation facilities that have proper handwashing facilities with soap.
The number of people practicing open defecation marginally changed from 24% in 2018 to 23% in 2019 meaning that about 46 million people are still defecating in the open.

Council, therefore, welcomed the key findings from the 2019 WASH-NORM survey and noted that the Ministry has commenced the third round of WASH-NORM Survey in 2021 and is hereby urging all the States and FCT to support the process.

The Minister stated that the Federal Ministry of Aviation is saddled with the overall responsibility for the formulation and management of aviation policies and was given the following mandates:

2. Implement a plan for effective maintenance and optimal use of Airport facilities across the Country.

3. Ensure and facilitate the Establishment of a National Carrier.

4. Actively collaborate with the Private sector to create a large number of well-paying jobs for Nigerian youths.

5. Implement a strategy towards the realization of Mr. President’s June 12 promise to take 100 Million Nigerians out of poverty in the next ten years

2. Implement a plan for effective maintenance and optimal use of all Airport facilities across the Country

3. Ensure and facilitate the establishment of a National Carrier

4. Actively collaborate with the Private sector to create a large number of well-paying jobs for Nigerian youths

5. Implement a strategy towards the realization of Mr. President’s June 12 promise to take 100 million Nigerians out of poverty in the next ten years

The Minister should make available copies of the presentations to states so that Council will have a fuller understanding.

PRESENTATION ON THE PROGRESS REPORT OF RAIL DEVELOPMENT IN NIGERIA BY RT. HON. CHIBUIKE ROTIMI AMAECHI, HONORABLE MINISTER OF TRANSPORT

Council was informed on how Rail Development was stalled in the 60s until 1986, when the Federal Government of Nigeria commenced the construction of 326 km standard gauge (1,435m) rail lines phase 1 from Itakpe – Ajaokuta – Warri.

Furthermore, rail infrastructure development halted until the present Administration came on-board and brought to reality the railway modernization plan of the Federal Government of Nigeria (FGN) by commencing the implementation of the 1,367 km Lagos – Kano railway lines. The outcome of the present government intervention includes:
Completed and made operational the 186 km Abuja – Kaduna Standard gauge rail lines;
Commencement of 185.5 km Lagos-Ibadan new Double standard gauge rail lines in 2016 and is almost completed;
Completed and made operational the 302 km Itakpe – Ajaokuta – Warri standard gauge rail lines; and
Connected the Apapa Ports by Rail, while that of Warri Port has been concessioned.

THE 25 – YEAR RAILWAY STRATEGIC VISION
The Federal Government in its determination to revive and modernize the Railway System in line with the 25-year Strategic Vision, adopted a Systematic dual approach.

This entails the rehabilitation of the entire existing narrow gauge lines simultaneously with the development of standard gauge lines.

Operational challenges
Insufficient locomotives, coaches and wagons, leading to congestion
Obsolete Machineries and workshop equipment
Access to only two seaports and none to airports
Lack of capacity to recover encroached premises and rental debts from government organisations

Legal and Legislative
The Railway Act of 1955 does not encourage Public Private Partnership.

Council welcomed the presentation and looked forward to further collaboration with the FG on this matter.