Some gunmen suspected to be kidnappers have abducted no fewer than nine people in Ogbomoso area of Oyo State. 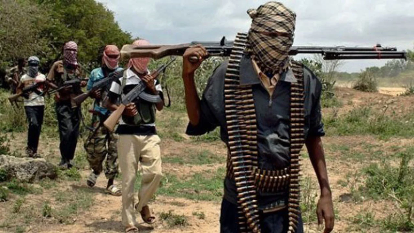 DAILY POST gathered on Sunday that the gunmen kidnapped the nine people in a hotel Saturday evening.

They were abducted around 10.pm at Agbo Hotel, located at Lagbedu area.

Our correspondent gathered from a native of Ogbomoso that among the nine people kidnapped included Mr Oyedokun Oyeniyi who is the owner of the Hotel and his wife, Busayo Oyedokun.

Seven other people who are members of Oyedokun’s family were also kidnapped.

DAILY POST gathered that the hotelier was preparing for his father’s burial which has been fixed for Friday.

The gunmen stormed the hotel premises pretending to be lodgers.

The whereabouts of the victims has not been ascertained as of the time of filing this report on Monday.

However, efforts made by DAILY POST to get the reaction of the Spokesman of the State Police Command, Mr. Adewale Osifeso, proved abortive.

Calls put through his mobile phone were not successful, just as text messages sent to him have not been replied as of the time of filing this report on Monday.

DAILY POST recalls that Oyo State has been witnessing cases of kidnapping by gunmen in the last few months.

DAILY POST had earlier reported how gunmen kidnapped fifteen people in the state between March 15 and April 15th this year.