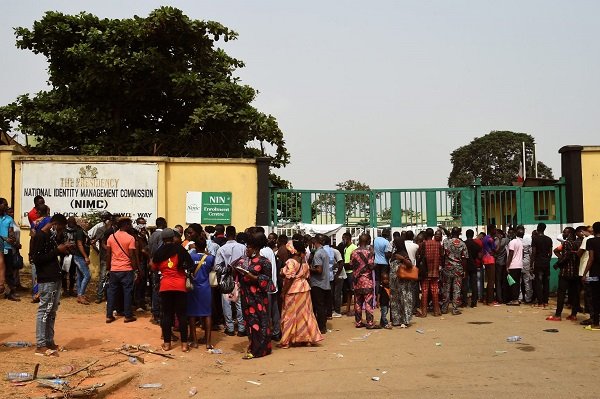 A mother of three and owner of a restaurant in Egbeda, a Lagos suburb, Sister Mary, said she paid N40,000 to get her three children and her four workers registered for NIN at a government approved centres in Alimosho Local Government Area (LGA) of the state.

“My brother, I have no choice but to pay. This country is in a sorry state. When I got to the place with my family as early as 5.25am, I saw very old men, pregnant women and teenagers, God knows if they slept there. The deal was N5000 per person. I paid because some of kids will use the NIN for their JAMB registration,” she recalled.

Another mother of four, Madam Esther Kokuma, a civil servant, said though she had heard NIMC come out to say registration for NIN is free but every where she had visited, cash was always demanded.

“For my two children that will be writing JAMB, I paid N5,000 to register for NIN at Ikola. When I told their dad about it, he warned me against going to pay because it was supposed to be free but the pressure from my kids became intense,” she said.

Two registration centres in Ayobo, a suburb of Lagos, also charge between N2500 and N3000 for registration for NIN.

In Ekiti State however, the extortion is minimal as only N1000 is paid for registration.

Temitope Adebayo said she spent N500 to obtain the form and N200 to collect the card when it was ready. She however said other people said they paid about N1000 to get theirs.

From Alimosho to Ikorodu to Surulere and other parts of the state, it has been the same tale of extortion. The few centres where cash may not have been a sine qua non are those run by the telecom operators but they a very few and largely unknown to many subscribers.

Attendants at some of the registration centres insisted that their employers paid cash to the Federal Government obtain the licence and acquire the equipment to conduct the exercise. “So after investing to buy equipment, train staffers and pay for the licence, where does the government expect us to get the cash to run the business? You can see we are three working at this centre, at the end of the month we collect salary,. So the government is aware of the money we are collecting” she said on condition of anonymity.

Calls put to the two mobile lines of the spokesman of NIMC, Kayode Adegoke weren’t picked. The text messages sent too failed to elicit response.

Besides the MNOs, such as Glo, MTN, Airtel and 9mobile and others that were licensed by the government, some non-governmental organisations were also granted approvals. Investigations showed that African Youth Growth Foundation, An Nadaa Educationl Foundation, Arrida Relief Foundation and Hadejia Ina Mafita were among the NGOs granted license to conduct the exercise.

But all these licencees are hardly seen conducting the registration for Nigerians.

The Minister of Communication and Digital Economy, Dr Isa Pantami  had at the twilight of last year directed the Nigerian Communications Commission (NCC) and telecoms operators to ensure the integration of SIM with NIN warning harsh punitive measures such operating licence withdrawal to recalcitrant carriers. A deadline of December 31, 2020 was fixed before moving the deadline to January 19 and February 9, 2021, following series of pushbacks from the public and the inefficient NIN enrolment procedures.

Stakeholders in the telecoms industry such as the President, Nigeria Computer Society (NCS) Prof Simon Sodiya said the decision of the commission to embark on this exercise is in response to the increasing cases of criminal activities such as financial crimes, kidnapping, banditry, armed robberies and other crimes which leverage easy access to the national telecoms network.

The Federal Government had further announced the extension of the deadline for people to link their NINs with their SIM early this month.

The deadline extension followed had a request presented to President Muhammadu Buhari to that effect and his subsequent endorsement.

A statement dated April 2, 2021 jointly signed by the Director of Public Affairs at NCC, Dr Ikechukwu Adinde and the Head of Corporate Communications at NIMC, Mr Kayode Adegoke, announced the new date.

The approval to extend the period of the NIN-SIM linkage to May 6 was given at the meeting of the Ministerial Task Force on NIN-SIM data linkage and key stakeholders held in Abuja.

The statement noted that over 51 million people now have their NINs with a significant increase in the monthly enrolments.

“The current number of monthly enrollments has increased significantly to about 2.6 million registrations. There has also been a remarkable increase in the number of enrolment centres across the country with about 3,800 centres available for enrollments. There are also many more new centres in the pipeline,” the statement said.

The meeting chaired by the Minister of Communications and Digital Economy, Dr Isa Pantami, was attended by various key stakeholders, including the chairman of the Economic and Financial Crimes Commission (EFCC), Abdulrasheed Bawa.

While addressing the meeting, the EFCC chief said the NIN-SIM card linkage would support the Federal Government’s effort in checkmating the activities of fraudsters and cybercriminals.

Mobile technology is increasingly being used in crime-fighting as mobile phones have call history, contacts, text messages, web browser history, location information, etc that provide critical information for crime fighters. Information contained in mobile phones can serve as a starting point for criminal investigations and provide subsequent leads. Digital forensics, a branch of science that deals with the recovery and investigation of material found in digital devices is becoming a popular discipline.