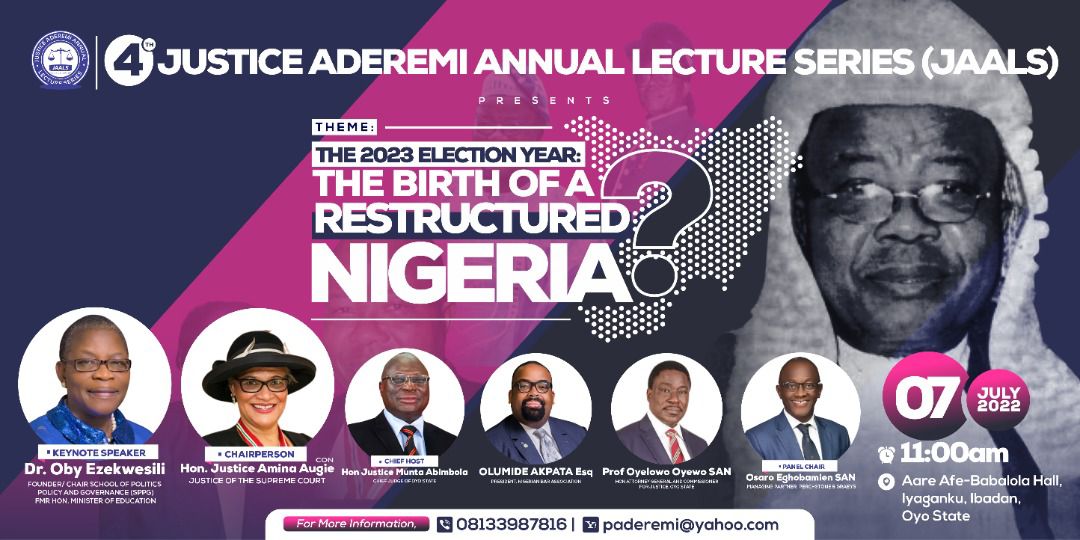 The 4th Justice Aderemi Annual Law Series with the theme ‘ *The 2023 Election Year: the Birth of A Restructured Nigeria? will hold on Thursday, July 7, 2022 at Aare Afe Babalola Hall, NBA Bar Centre Iyangaku, Ibadan by 11am.

Speaking on the Law series, one of the organizers of the Lecture, Mr. Kunle Aderemi, explained that the theme of the series was strategic and timely, saying that the time to discuss frankly the continued existence of the entity Nigeria is now.

He stressed further that to the extent that the country appears divided along ethnic, religious and political lines, Nigerians must revisit this all-important topic, particularly as the country goes into it’s election cycle to elect a new President of the Federal Republic of Nigeria.

According to him, “It is a season where career politicians will travel round the country canvassing for votes promising many things including restructuring Nigeria. It is therefore important to interrogate whether this is what will restore peace and security in the country.

Mr. Aderemi stated the Annual Law series is in recognition of the legacies of Hon Justice Pius Olayiwola Aderemi JSC CON, an adroit and quintessential jurist, noting that the keynote address will be delivered by Dr Oby Ezekwesili, Supreme Court Justice Amina Augie JSC will chair the occasion and the President NBA Olumide Akpata Esq, will declare it open.

He added Osaro Eghobamien SAN would chair the Panel of Discussants some of which include Oyo State Attorney General and Commissioner for Justice, Prof Oyewo Oyelowo SAN, Honourable Speakers of the Oyo and Ekiti Houses of Assembly, Right Honorable Adebo Ogundoyin and Rt. Honourable Funminiyi Adufe.