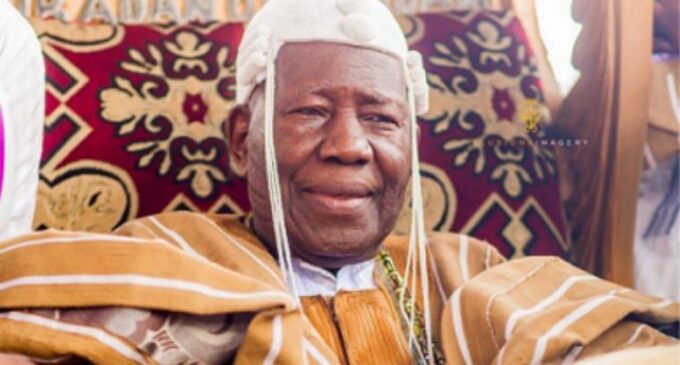 Traditional institution in Ibadan has been dealt a major blow with the death of the 41st Olubadanof Ibadan, His Imperial Majesty, Oba SaliuAkanmu Adetunji, Aje Ogungunniso 1.

This was the verdict of the Chairman of the Ajimobi Legacy Forum (ALF), Chief KunleSanda in his condolence message to the family and people of Ibadan over the death of thetraditional ruler.

According to Chief Sanda, the late monarch would be missed by all and sundry as he was a compassionate Olubadan who was always interested in the development of Ibadan, its people and Oyo State.

“His death at this time will leave a vacuum. He was a voice of wisdom and compassion and this reflected in his peaceful reign in Ibadanland in the last five years. Despite his advanced years, he never allowed this to affect his day-to-day function as the Olubadan, his passion for the people and development of Ibadan land and environ”.

The ALF chairman also noted the contribution of the late monarch in the creative industry with his promotion of musicians who later became house hold names in the country.

In the same vein, Chief Sanda extended his condolences to the immediate family of the Olubadan, the Olubadan-in-Council, friends and associates of Oba Adetunji, the people and government of Oyo State. He advised Governor Seyi Makinde to ensure that laid down traditional procedure is strictly adhered to in picking the successor to the late monarch.

“ This is important in order to ensure a continued peaceful atmosphere in Ibadan”, he said.