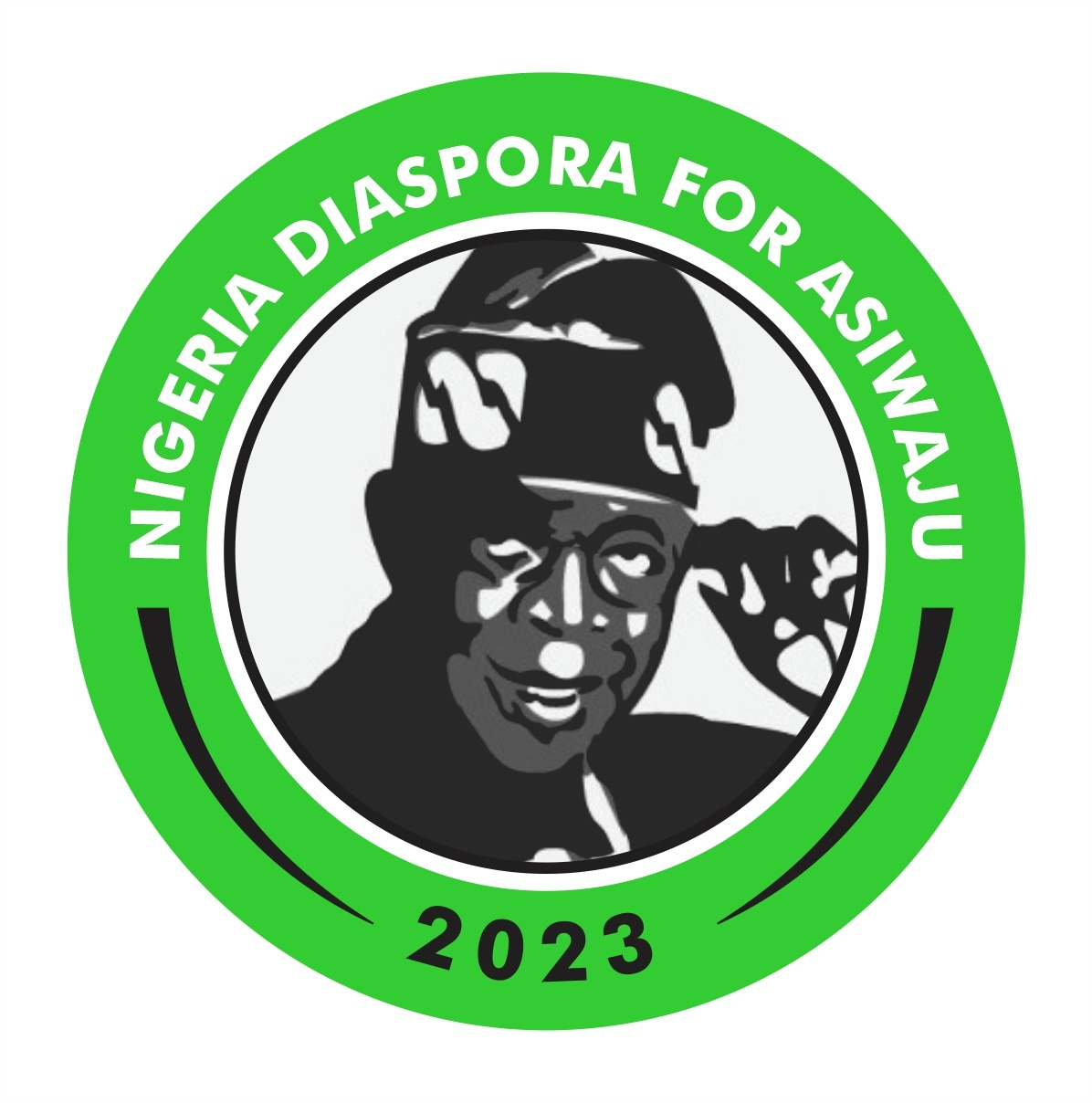 The above caption refers.

Nigeria is on the march again – on the march to further greatness as our Nation and Party prepare to go to the Polls Next Year!

The All-Progressives Congress (APC) will embark on its own Primaries in a matter of weeks to present a Candidate that is worthy and versatile enough to emerge victorious come 2023 and to consolidate the achievements of the Party, especially at the Federal level.

As over 7,800 Delegates shortly converge to take decisive action that will ensure continuity of the Party, especially at the Federal level or truncate the current developmental strides of the Buhari-led APC Administration, we owe Nigeria – as our Country, with nowhere else to call our own and Nigerians, as a People, a sense of duty to ensure that the legacies of the Buhari Administration are sustained, and improvements made where necessary.

The Nigeria Diaspora for Asiwaju (NDA) has come to prick your conscience to see your individual selves as Nationalists who want the best for their Fatherland. It is a fact that a number of potential aspirants have put themselves forward as potential successors to our Country’s number one citizen, President Muhammadu Buhari.

Whilst these said aspirants are also members of our great Party and capable in their own right to so aspire, it is fundamentally germane that we view these political aspirations to participate at the zenith of our National life holistically and transcendentally – beyond the wishes of mere individuals. It is a decision that can make or mar the future of Nigeria and the future of our yet unborn generations.

Let us also place on record that any attempt by us, inadvertently, negligently or otherwise, that may cede the advantage to the opposition will be a call to National disaster that will take Nigeria back 30 years of accelerated development. The future, therefore, lies on your shoulders, ladies and gentlemen.

As stated above, whilst there are many Presidential hopefuls within our Party, we must not be oblivious to the fact that only the best of them can deliver for APC. Our best striker can guarantee us victory at the Polls. The Party with the current narrative in the Media needs a Presidential candidate with a well-structured template, the requisite National spread and appeal, a detribalised Nigerian with no tongue, religious or ethnic affiliation but a commitment to a common brotherhood that brings us together despite our diversity.

The APC deserves a candidate with no ethno-religious baggage, a calming influence to frayed nerves, discountenancing every form of parochialism and engendering an objective and progressive communalism thus securing the unity of the Country. Without much ado, the only candidate that satisfies these criteria and fairly so; that mammoth, that juggernaut that can win the public over for the Governing Party is no other than the National Leader of our great party, is the Jagaban himself: Asiwaju Bola Ahmed Tinubu!

The choice of Asiwaju is not far-fetched. You may want to ask, ‘Why an Asiwaju Presidency?’, ‘What makes him different?’, ‘Can Nigerians trust Asiwaju for good Governance?’ These and obviously others not stated here are the possible questions that may come to mind as we take this very strategic decision about our dear Country – Nigeria. We would like to address some of these questions under the following sub-headings to assist us in making an informed decision.

Why An Asiwaju Presidency?

The question should rather be, ‘Why not an Asiwaju Bola Tinubu Presidency?’ Asiwaju Tinubu, like any other Nigerian, is eminently qualified to run for the number one seat in the Country. If for any reason there is any man who has hitherto played inclusive but smarter politics from 1999 till date, no one rivals the personage of Asiwaju Bola Ahmed Tinubu. His antecedents in the days of the aborted 3rd Republic, NADECO, Afenifere and more recently between 1999 to 2007, more than qualify him over and above anybody to run for the Presidency.

Apart from his obvious and demonstrated competency skills, he has exhibited consistently just how successful a man can be handling public and private offices. His sway in the private sector where he was celebrated as a turnaround maverick at Mobil and his astuteness in turning Lagos from a bankrupt state in 1999 to a State with the highest Internally Generated Revenue – IGR in 2007 are pointers to his wizardry in leadership. He is a man of many firsts.

His doggedness and efforts at helping to entrench the current democracy the Country enjoys today; and his achieved milestones as Governor of Lagos State lend credence to the description of him as a leader of leaders, a mentor of mentees, a wealth creator, a go-getter, a political strategist, a role model and a brain box. His Bourdillon abode in Ikoyi, Lagos is a Mecca of sorts as a smorgasbord of personalities mill with party faithfuls and supporters who continuously throng his house to tap from the depth of his seemingly unfettered wisdom.

Asiwaju Bola Tinubu has consistently shown that he is a man with the Midas touch. He is a man with a big global vision who believes in human capital and resource development to achieve his set goals and objectives. His vision is not fettered by ethnic bias or mediocrity, always promoting those worthy of merit, irrespective of their ethnic or religious lineage. Asiwaju demonstrated this visionary knack when as the first Governor in Nigeria, he brought into his cabinet people from various ethnic backgrounds to help manage a cosmopolitan city like Lagos with him.

If Nigerians could trust their Country with President Muhammadu Buhari after 3 attempts by him to no avail, and the second term in 2019 despite the narratives in the Media, why not Asiwaju Bola Ahmed Tinubu? Good governance is a relative phrase. If good governance is about a higher quality of life, good living standards, social justice, financial re-engineering to improve Societal prosperity and enhanced security, there is no other candidate with the clout, wherewithal and experiential knowledge better than the Jagaban himself! Asiwaju Bola Ahmed Tinubu.

Asiwaju is a pacesetter, a moving Nation in his own right, a living trailblazing legend and a strategist that propels and promotes idealism to realism. He understands people-oriented politics and his contemporaries both envy and respect him in equal measure for this. He transcends generations – a rarity indeed.

We, therefore, appeal to you in all good conscience as Nigeria and indeed each and every Nigerian looks to you, to decide and define the future for them. It is either we decide a future of economic prosperity, financial re-engineering, human capital development and social inclusivity in an Asiwaju Presidency or we define a future of constant blame ringing with tales of woe: ‘had I known’ regret or ‘why us’ ululations as we self-implode and thereby negate the opportunity to ensure our Country’s future development. May that not be our portion. Amen.

Your vote should go for a man who you can truly beat your chest for and say, ‘I was part of this historical but all-important decision ensuring progressive change, in which I can believe’.