OSINBAJO @ 4TH MSMES AWARDS: WE ARE ENCOURAGED BY INNOVATION, RESILIENCE OF YOUNG NIGERIANS

OSINBAJO @ 4TH MSMES AWARDS: WE ARE ENCOURAGED BY INNOVATION, RESILIENCE OF YOUNG NIGERIANS 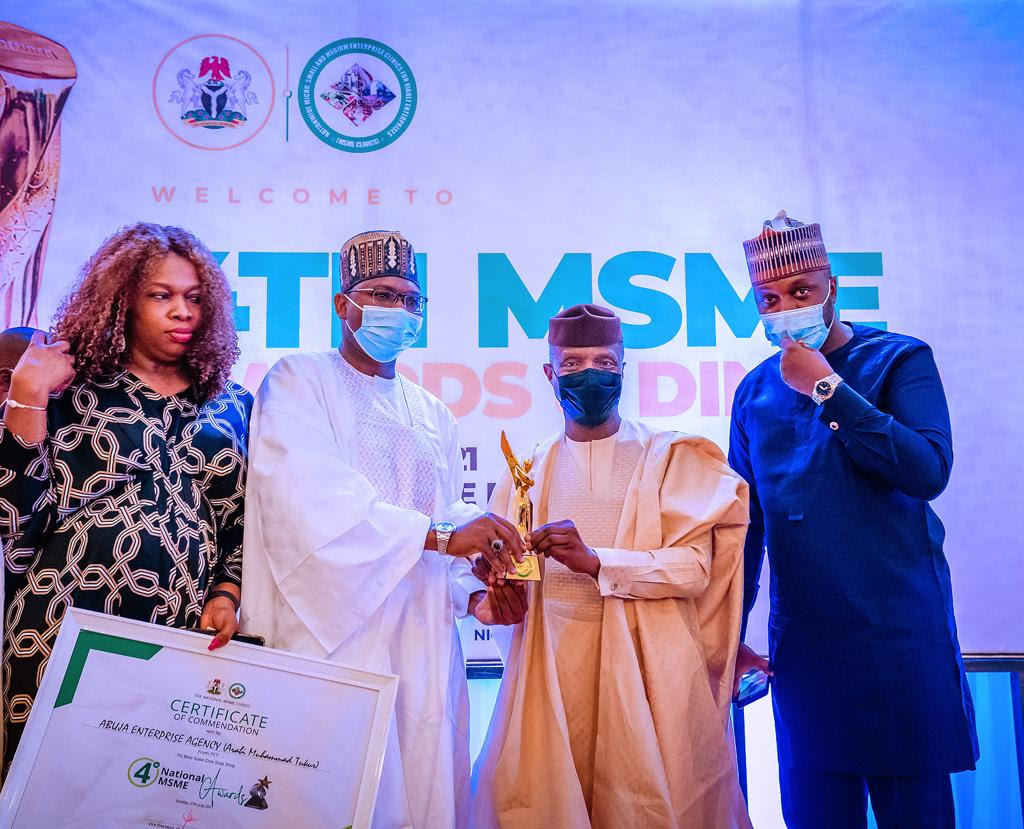 The Federal Government is encouraged by the resilience and innovation of young Nigerians across different sectors and is committed to doing more to support their growth and prosperity, according to Vice President Yemi Osinbajo, SAN.

Prof. Osinbajo stated this last night at the 4th National MSME Awards held at the State House Banquet Hall, Abuja. Twelve (12) MSMEs across the country won awards in different categories, while Gombe State was recognized as the best State in the ease of doing business rankings. 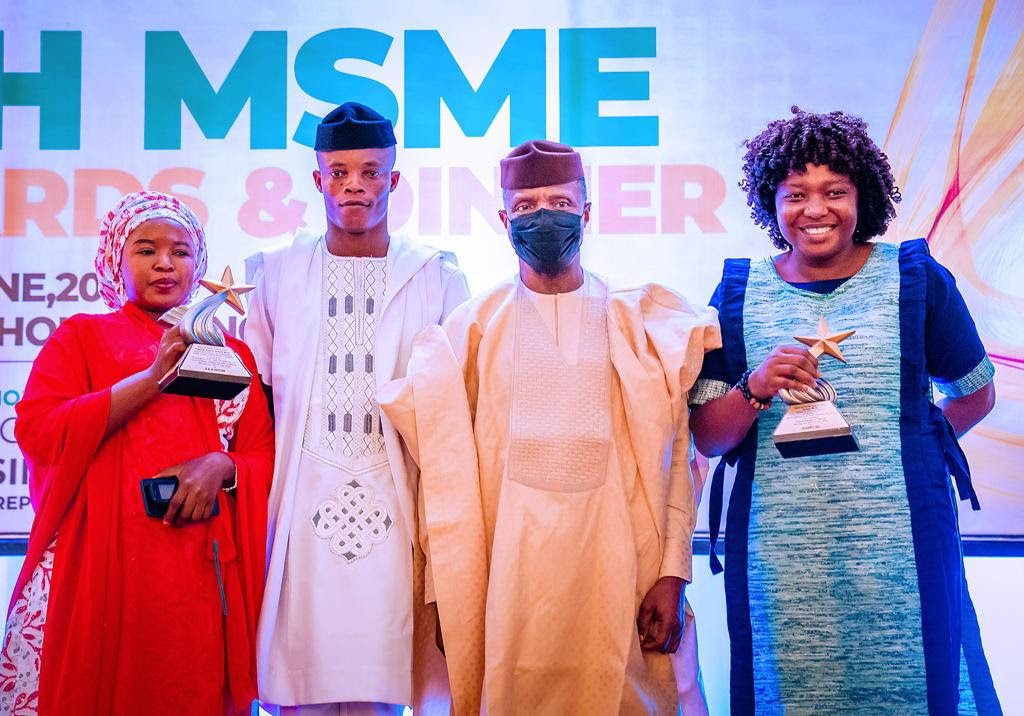 The Awards ceremony was the climax of a week-long celebration of excellence, hard work and innovation in the Micro, Small and Medium Enterprises (MSMEs) sector in Nigeria.

Reiterating the commitment of President Muhammadu Buhari to small businesses, the VP said, “we are encouraged by the innovation of young Nigerians and your resilience. We are on the right path.

“Let me leave you with President Muhammadu Buhari’s words of commitment to MSMEs in Nigeria: he said, “we will continue to stand by you, to support you and create opportunities for you to grow and prosper.”

The VP commended the creativity of the 2021 winners of the awards, noting that “the awards have inspired many young entrepreneurs to greatness and some of the stories are simply incredible.”

His words; “this year we also have a selection of outstanding winners. Our MSME of the Year, “Bold Artistry”, is a company with a team of young and creative artists working on improving the arts industry by introducing Polystyrene to their works. With this, they have created impressive artworks and are providing jobs for many budding artists.”

Talking about another outstanding MSME, Prof. Osinbajo noted that, “Osky Integrated has created its niche in the business of catfish farming. The founders are adding value to fish farming through processing for the local and export market.

“Other winners such as Vegas Gold and the Footwear Academy are promoting made in Nigeria products in the fashion and footwear industries respectively.”

Speaking on progress made in interventions targeted at supporting growth in the MSME sector, Prof. Osinbajo said the Federal Government was on the right path, having completed and inaugurated two Shared Facility projects for MSMEs in Benue and Lagos States, with the third located at the Ogbunike Leather Cluster in Anambra State ready for commissioning.

He disclosed that many others are in the works. According to him, “other Shared Facility projects ready for commissioning before the end of the year include Kaduna State Tomato Paste Production line and a Carpentry cluster in Edo State. Others are in Katsina, Kebbi, Ebonyi, Ogun and Kano States.”

The VP said government interventions in the MSMEs space over the years have been geared towards creating jobs, ensuring growth and making them more viable.

He expressed satisfaction with the interest shown in the Awards since its inauguration in 2018, noting that, “the National MSME Awards has grown in leaps and bounds. It has become a prominent feature in the annual event calendar of the MSMEs community in Nigeria, attracting thousands of prospective business owners, established entrepreneurs, regulators and financiers.”

His words: “In the first edition of the awards in 2018, 500 applications were received. I am told that over 10,000 entries were received for this year’s edition alone. Clearly, the interest shown in the awards by Nigerian entrepreneurs has been tremendous.”

The VP observed that though past winners in the different categories have gone home with various prizes that have impacted their businesses and profiles, the stakes are higher in 2021, stating that, “this year will be even bigger when compared to the limitations experienced during the 2020 edition due to the Covid-19 pandemic.”

While congratulating all the finalists and nominated MSMEs across the country, the VP urged those who didn’t make it in this year not to give up, urging them to “keep innovating, keep working hard,” assuring that “your recognition and reward is inevitable.”

He thanked all Governors who hosted MSMEs Clinics in their States, supported the building of one-stop Shops for MSMEs, and also those who provided suitable buildings for the Shared Facilities for MSMEs.

Previous Posts My Life In One Year | Florence Ajimobi
Next Posts LNSA, DSS SET TO PARTNER FOR IMPROVED SECURITY, SAFETY IN LAGOS