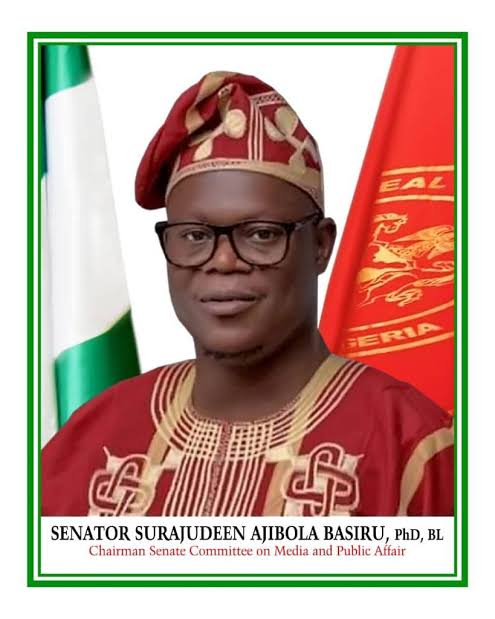 In pursuing this thesis for which he is apparently expressing the eventual triumph of Professor Osinbajo, he predicated his thesis on the following contentions: that a person can only attain the office of the President if he is supported by those he referred to as the establishment: that religion has almost lost relevance ultimately in the Nigeria political context; that the President was referring to Professor Osinbajo when he answered the question on who is the favourite among the aspirants in a live television interview; that President Buhari will anoint Professor Osinbajo as appreciation of the later’s loyalty; that most Buhari men are against Asiwaju Bola Ahmed Tinubu; and of course making defamatory and denigrating remarks against Asiwaju Tinubu.

The Theory of Establishment as the only route to the Presidency appears to be the typification of Nigerian democracy by the writer. Senator Adeyeye asserted and I think rather firmly that “if the establishment does not want you, you can never win the presidency”. I am at a loss to see the factual and empirical basis for this assertion in view of the recent political history of Nigeria that saw the presidency of President Buhari dislodging an incumbent President and a political party that has controlled the Presidency for about 16 years before the 2015 electoral loss. Which establishment want President Buhari and the APC in 2015. I see here a clear attempt to use a banal assertion to becloud the spirited efforts of the coalition that ripened to the APC and the struggle of our leaders like President Buhari, Chief Bisi Akande, Asiwaju Bola Ahmed Tinubu, Chief Ogbonnaya Onu among others that ensure the presidency for the APC against all odds. Perhaps, Segun Adeniyi’s book with the title “Against the Run of Play” comes to mind.

Another banal assertion by the Distinguished Senator is that “religion as a factor in Nigerian political outcomes is overrated, especially at the national level.” Beyond this mere assertion, I am yet to see the empirical study that support the assertion. His further assertion that “when it matters, realpolitik always trumps religion” leaves the gaping questions of “when realpolitik matter?” and “who determines when realpolitik matters?” I see in the assertion an overly dangerous assumption that mass of the people and their opinions can be easily discounted in a democratic polity. To dismiss with a stroke of pen the possible effects of religion in a largely traditional society like ours in democratic choices is far from being profound. Is the Senator oblivious of the fact that Professor Yemi Osinbajo became Vice President in 2105 largely due to the orchestrated campaign again a Muslim/Muslim ticket because President Buhari was perceived to be an Islamic extremist and hence the party needed a Pastor from the South West to ensure the candidacy is sellable to the southerners?

My sense in reading the article is that people are outrightly discounted in our democratic enterprise, what matters from his theory is the predisposition of what he termed the “establishment”. Therefore, the mission for the Distinguished Senator is simple, market the aspiration of Professor Osinbajo and make disparaging and even outright defamatory assertions against other aspirants, particularly Asiwaju Bola Ahmed Tinubu, to curry the favour, nay the endorsement of “the establishment” for his aspirant. I indeed find very interesting that the Senator readily asserted with apparent finality “that Nigeria is not a land of political revolution.” These are indeed very interesting times!

According to Professor Adeyeye, “If the North thought Osinbajo a problem on religious grounds, he wouldn’t have been accepted as the vice president to a Buhari as president”. So, we are being told that it is the “North” that accepted Osinbajo as the Vice-President? Are we being taken on a journey of amnesia on how Professor Osinbajo became the Vice President by mere assertion and deliberate distortion? So, it is the “Northern establishment” that suo motu “notice(d) the genius behind the string of legal victories – Professor Yẹmí Osìnbàjò” and his emergence is not part of the negotiated political arrangements with our party Leaders in the South West after the victory of the All Progressives Congress (APC)?

While, I am not denying the astuteness of Professor Osinbajo as a legal scholar, to simply attribute his emergence as the Vice President to being “noticed” by the “Northern establishment” as a “genius” is to distort and deliberately falsify political development and history we all know and partook in.

The writer is obviously claiming to have conducted census of the President Buhari’s foot soldiers against Asiwaju Bola Tinubu as he claimed “let him name one Buhari foot soldier in Tinubu’s camp and I will name a hundred that are not there”. Perhaps he can oblige the public with result of his census of anti Tinubu Buhari foot soldiers to back his assertions! In making comment on President Buhari’s comment that the presidency is not for sale to the highest bidder, perhaps the Senator is oblivious of the fact that the President has access to information of the camp already reported as wooing delegates with cash gifts in Naira and Dollar. Surely, we wise citizens are paying attention!

That the Senator is not content with selling his aspirant to those he called “the establishment” without attacking Asiwaju is revealed by this obviously deprecatory and defamatory assertion unfortunately penned by a personality I have so much respect for:

“Yes, Tinubu has the structure, he has amassed the money and is already throwing it around left, right and centre, but the truth is that many are just fleecing him at the moment. Many signals within the party and within the establishment indicate he is on a hiding to nothing. Many see Tinubu as a greedy blackmailer who must be kept away from Aso Rock because he has the capacity to create an entirely different political patronage structure that can alienate the ‘Class of 1966’.”

The above remarks revealed a desperate move to disparage the character and reputation of Asiwaju Tinubu and must be interrogated to reveal that they were made with bile and guile. Asiwaju Tinubu has been out of office since 2007 and has not held office and has never been indicted for corruption and breach of public trust. So, we can ask our Senator, when has it become a crime to be rich. Where is the evidence of Asiwaju throwing “money around left, right and centre”? Baseless allegation from a Distinguished Senator is rather mind boggling! It is rather outlandish to hide under the one finger of “many” to call Asiwaju Tinubu “a greedy blackmailer”! Let the Senator identify a single patronage given to Asiwaju Tinubu since the inception of President Buhari’s administration. Then talking of blackmail, who is Asiwaju Tinubu blackmailing? President Buhari or Professor Osinbajo or “the establishment “? It is quite unfortunate that a mind trained in science will make disparaging remarks without any evidence and hiding under unidentifiable “many”.

Apart from unfounded denigrating remarks, there was also the intention to rally the “establishment” against Asiwaju Tinubu when he commented that Asiwaju is someone “who must be kept away from Aso Rock because he has the capacity to create an entirely different political patronage structure that can alienate the ‘Class of 1966’.”

The apparent desperation of the commentator to rally the “establishment” against the candidacy of Asiwaju Tinubu was brought out with more potency when he again asserted: “Incidentally, Tinubu went full throttle to politically terminate Ambode when the latter tinkered with the patronage structure in Lagos. As far as the establishment are concerned, Tinubu has been amply rewarded with the free rein they’ve given him over Lagos and its purse strings. Giving him Aso Rock is class suicide for the establishment.”

Many issues may be raised from the above. Of what relevance is issue of Ambode to the choice of Nigerian presidency? Is it that it is “the establishment” that gifted Lagos to Asiwaju as a reward? And reward for what? The innuendo of control of purse of Lagos is another evidence of the liberty the Senator took in making defamatory assertions in his article. The assertion on “giving” out Aso Rock depicts the obvious understanding of the Senator that our democracy has become a spoil of war. Perhaps, the Senator will need to elucidate how Asiwaju Tinubu winning the Presidential election will constitute “class suicide for the establishment”. I think this is a mere exercise in scaremongering and calling a dog a bad name to kill it.

I don’t think it is necessary to comment on equally defamatory assertions against Godwin Emefiele, the Central Bank Governor, as it has become a pattern in coming against any perceived opponent of the writer’s aspirant. However, I find it rather strange the “new revelation” that the late Abba Kyari “was said” to have been working closely with Tinubu to frustrate the nomination of Professor Osinbajo as the Vice President in 2019. Apparently, the Senator was not sure of himself on that fact and therefore used the phrase “was said” which in legal parlance means what he stated was mere hearsay. It speaks to the motive of the commentator that such revelation could be based on what “was said! Also, as a student of logic, I cannot find the sequence in the contention that because Buhari did not replace Osinbajo as vice president in 2019 “is a strong indication that Buhari thinks him worthy of succeeding him in 2023”. That is a rather outlandish proposition!

I wouldn’t know that Distinguished Senator Adeyeye has developed talent for mind reading when he said the President was referring to Professor Osinbajo in a Channels Television interview with Maupe Ogun. However, if the Senator was cocksure of having read the mind of the President at that interview, one will think the subsequent paragraphs of his article campaigning to the President to help make the case with the “Northern establishment that Osinbajo is the best bet for Nigeria” is needless! It seems my Distinguished leader is not convinced himself of the mind reading. And I am at a loss to understand what the Senator meant when he said: “For a man who knows what Osinbajo has endured as vice president, he knew what he was talking about.” Is it that the Vice-President has been a beast of burden and Nigerian Presidency is a compensation and not about service?

Speaking about loyalty, is it the case that party leaders and supporters who are outside the government are not loyal to the government both in birthing it into power and sustaining it. The price for loyalty cannot and ought not to be exclusive preserve of those who have been in the corridor of power for about seven years. Can anyone in his right mind doubt the commitment and loyalty of Asiwaju Bola Ahmed Tinubu to the emergence and sustenance of the APC and its government under the leadership of President Buhari?

Senator Ajibola Basiru Ph.D. is the Senator for Osun Central in the Senate Chamber of National Assembly.