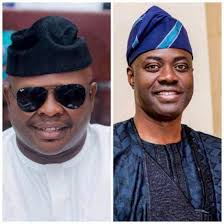 The Association of Local Government of Nigeria, (ALGON) yesterday disclosed  that the Oyo State government has discontinued the proposed out of court settlement which it had initially initiated to resolve the political impasse created by thedissolution of local government council administration in the State.

A statement signed by ALGON chairman in the State, Prince Ayodeji Abass- Aleshinloye and Secretary,  Pastor Olayinka Jesutoye said ALGON took up the invitation of the State government on resolving the logjam by meeting its representatives on February 8, but was surprised that the State government came unprepared for the meeting as it had no position paper in spite of the position paper presented by the  ALGON team.

The statement entitled:  “WHAT ELSE DOES HE WANTS, AS GOV. SEYI MAKINDE MADE A-U TURN BY SAYING CAPITAL ‘NO’ TO THE NEGOTIATION INITIATED BY HIS GOVERNMENT”, said ALGON demonstrated its willingness to resolve the political cul de sac which has created crisis in the last nine months in the State, in the interest of the people of Oyo State.

“Sequel to the invitation by the Oyo State Government to the ALGON, Oyo State Chapter, for amicable resolution of the present political impasse in the State, ALGON representatives met with the Governor’s team on the 8th February, 2020, to find a common ground in resolving the political imbroglio in the State (ALGON had gone with a prepared position paper).

“ALGON demonstrated willingness in the interest of the good people of Oyo State and to release the grassroots from the cul de sac that the present administration in Oyo State has plunged the state into in the last nine (9) months by submitting its proposal to the Government’s team who was at the meeting surprisingly without a position.

“It is disheartening to inform the general public that the Government that proposed an amicable settlement treated same with levity and shenanigans and postponed the meeting to the 10th February, 2020 to enable the Government take a position.

“But to our disappointment, the Government made a U-TURN through their representatives and told the ALGON’s team that the governor was  not willing to go on with the said negotiation again without proposing anything to the ALGON.

“To put the record straight, ALGON demands basically the restoration of all the elected Chairmen, Vice-Chairmen and Councilors back to their respective Councils in line with the provision of the Constitution of Federal Republic of Nigeria, which guarantees their tenure.

ALGON also assured His Excellency, Engineer Seyi Makinde of total supports in moving Oyo State forward but the Governor rejected the ALGON requests and hands of fellowship extended to him by ALGON.

It is now  clear that the State Government does not want peaceful resolution of the issue in Oyo State but rather playing the  ostrich.

Even while the purported negotiation aborted by Governor SeyiMakinde lasted for a short period, all the Illegal Caretaker Chairmen embarked on looting the public funds unabated at the local government with the connivance of some unscrupulous bank officials and few officials of Local Governments to the  detriment of the people at the grassroots.

Previous Posts BREAKING: Bomb explosion rocks Edo APC scribe residence
Next Posts OPEN LETTER TO OYO AOPSHON ON THE SUSPENSION OF SOME OF HER MEMBERS