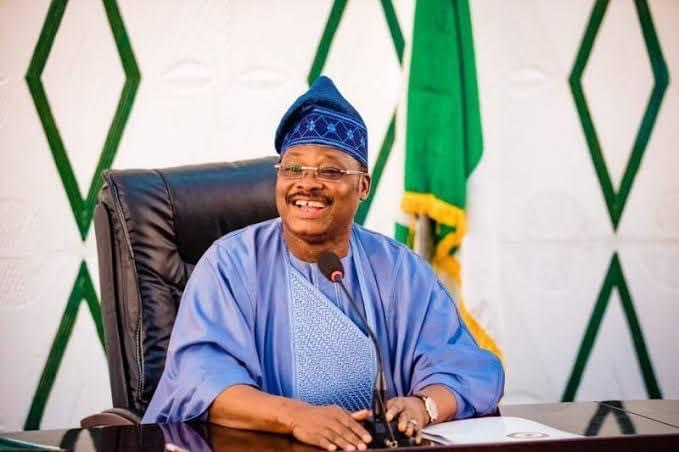 It’s been over two years that the immediate past Governor of Oyo State, Senator Isiaq Abiola Ajimobi transited to the great beyond. Before he died, Senator Abiola Ajimobi had spent an epoch and momentous life on earth. It needs refreshing our memories a bit about how gracefully accomplishing his 71-year old existence was.

Abiola Ajimobi was born on 16th December, 1949, to a political family which had his grandfather, Sanni Ajimobi, as Sobaloju of Ibadanland, his uncle, Hon N.A. Ajimobi who was a former Minister of Works and Transport in the Western Region and Abiola Ajimobi’s father, Alhaji Gani Ajimobi, an Honourable member of the House of Assembly in the Western Region. Isiaq Ajimobi attended St Patrick’s Primary School, Oke Padre (1 to 3) and Ibadan City Council Primary School, Aperin (4 to 6). He went for his secondary school education at Lagelu Grammar School, Agugu, Ibadan. Abiola Ajimobitook his educational pursuit further by traveling to America. He attended Buffalo University now called State University of New York, Buffalo where he studied Business Administration with focus on Finance. He did his Masters Degree at Governors University in Chicago, also in Business Administration, majoring in Operations Finance. Ajimobi had flourishing careers after his return from the US at Elm Consulting Firm, Senior Consultant; Modulor Group, Finance and Admin Controller; Nestle Foods PLC, Operations Controller and later Marketing Controller and later, National Oil and Chemical Marketing Company where he rose to become the Managing Director after which he retired from the corporate careers to join active politics.

Abiola Ajimobi’s foray into progressive politics was a colossal success for himself, Oyo State and Nigeria. He was the senator representing Oyo South between 2003 and 2007 under the Alliance for Democracy after which he joined the race to become the governor of Oyo State. His first attempt to become the governor was not successful and it was in his second attempt that he became the governor. The mantle of leadership of the progressive party fell on him after late Lamidi Onaolapo Adesina, a former governor of the state. Isiaq Ajimobi broke the age-long jinx of becoming the first governor to spend two tenures of eight years in Oyo state. During his administration, he achieved several firsts and made some giant strides which earned him the appellation of the Architect of modern Oyo State. One of the confirmation of this is his unmatched efforts to return sanity to the once chaotic, insecure state while providing infrastructures that re-enacted Ibadan of the 50s, 60s and 70s as large retail stores, malls, cinemas and other business concerns returned to Ibadan.

After his two tenures as the governor which ended in May 2019, Senator Abiola Ajimobi became a more prominent player in national politics of his party, the All Progressives Party, APC. He was arguably the most trusted, most loyal ally of Asiwaju Bola Ahmed Tinubu who was the National Leader of the party then and now the presidential candidate of the party. In the wake of the protracted rancour among the national leadership of the APC which led to the removal of Adams Oshiomole as the National Chairman of the party, late Senator Abiola Ajimobi was appointed as the Deputy National Chairman of APC, South and was being prepared to become the Acting National Chairman before death struck and took away the astute gentleman and politician. Since his death, the Oyo state political scenes and atmosphere have not remained the same. The progressive APC has lost a charismatic leader and it has been difficult to fill the vacuum Isiaq Ajimobi left behind. The party is in disarray as there has been no single major leader who could deploy authoritative voice to mediate, settle disputes, cajole and persuade other minor leaders and the rank and file of the party to order. Oyo APC was left with leaders who consider themselves above the party as APC in the State  reached its climax of irreconcilable political conflicts during the last governorship congress which tore the party apart. As we speak, Oyo APC is approaching 2023 election walking on one leg.

At the national level, with the presidential candidature of Asiwaju Bola Ahmed Tinubu, a charismatic, assertive and likable personality like Abiola Ajimobi would have had the political ground, especially in the south west, softened for Bola Tinubu. There was no doubt that Abiola Ajimobiwielded considerable influence among fellow political actors across major parties not only in the south west but also across Nigeria. The intrigues and powerplay that characterised the APC’s presidential primary would have been averted were Abiola Ajimobi around. Indeed, Asiwaju Bola Tinubu lost a reliable, sagacious and strategic thinker and politician in Abiola Ajimobi.

However, there is a bit of consolation for the absence of Abiola Ajimobi from the political scene as his masterpiece of nature, Dr Mrs Florence Ajimobi, has been playing exemplary roles even as a woman in filling the political vacuum left behind by her endearing hubby. She is presently actively involved in the presidential electioneering of Bola Tinubu, leading progressive women from Oyo State. Also, the Governor of Kano State, Dr Umar Ganduje, who incidentally is an in-law to the Ajimobis continues to stand like a rock of Gibraltar behind the political dynasty that Abiola Ajimobi left behind. It’s not wrong to say that Dr Ganduje’s unalloyed support for Asiwaju’s presidential candidacy is as a result of his marital relationship with the Ajimobis.