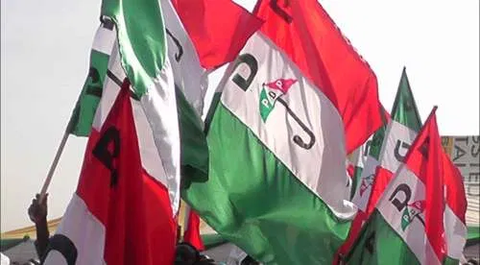 The crisis rocking the Peoples Democratic Party (PDP) in Oyo State assumed another dimension on Thursday, after some stakeholders in the party asked the National Working Committee (NWC) to dissolve the state executives, who they who described as “stooges” of Governor Seyi Makinde.

In a communique issued at the end I’d the meeting, held at Jogor Event Center, Ibadan, the stakeholders said they have resolved to save the party from mismanagement and egoistic tendencies of Makinde.

The communique signed on behalf of leaders and stakeholders by Mogaji Nureni Akanbi and Alhaji Hazeem Gbolarumi,frowned at the Makinde’s highhandedness and attitude of giving party patronage to non-party members as against genuine party members who laboured to bring the PDP back to power in Oyo State.

The communique read: “The Stakeholders condemn in the strongest terms the spate of insecurity in the State and calls on the State Governor to wake up to his primary responsibility of protecting lives and property of the citizenry.

“The PDP stakeholders commiserate with the bereaved families of those who lost their lives in Ogbomoso, Ibarapa and other parts of the State. The body prays that God should comfort their families.

“The Stakeholders have resolved to save the PDP from mismanagement and egoistic tendencies of the State Governor, Engr. Seyi Makinde.

“The Stakeholders frowns at the Governor’s attitude of giving Party patronage to non Party members as against genuine Party members who laboured to bring the PDP back to power in Oyo State as demonstrated during the last Local Government election where the Governor ‘ donated’ 4 chairmen and vice and 48 Councillorship seats to his friends in ADC.

“Today is to alert the leadership of PDP and members of PDP across Nigeria and general public that Oyo State PDP has been factionalized into two – one is headed by the Governor and the other by the leaders and stakeholders across the 33 local governments as evidence at this meeting.

“This is due to governor’s highhandedness, recalcitrant attitude and lack of leadership within the party as expected of a governor.

“We are calling on the National Leadership to dissolve Oyo State PDP Executive who are stooges of the governor and have no interest of the party at heart ahead of congresses coming up later in the year so as to give a sense of belonging to our teeming members and supporters in Oyo State.

“The caretaker committee should be put in place to reorganize the party ahead of the congresses to allow for free and fair congresses.

“The Stakeholders call on the national leadership of PDP to urgently step in to rescue the Party in Oyo State from the grip of the Governor who is running the Party like his personal estate. To be forewarned is to be forearmed.”

Signed on behalf of leaders and stakeholders by the duo of Mogaji Nureni Akanbi And H.E. Hazeem Gbolarumi