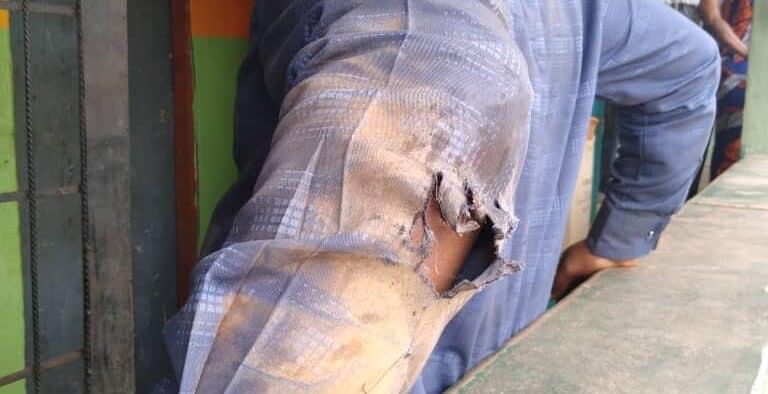 Following the Oyo state Peoples Democratic Party (PDP) primaries towards producing party candidates to represent the party at the forthcoming local government election in the state, the exercise has since been disrupted in Lagelu local government as one of the party chairmanship aspirants in Lagelu, Gbadamosi Kazeem Adeyemi, allegedly mobilized members of the proscribed National Union of Road Transport Workers (NURTW) to disrupt and hijack the process in the local government.

This was made known to journalists who had gone out to monitor the party primaries in Lagelu Local Government in Ibadan on Monday 8th March, shortly after the exercise was disrupted in Lagelu local government.

The exercise which was scheduled to hold at Community Primary School, Alegongo was however, disrupted by NURTW men numbering over 200 in about 40 vehicles allegedly spearheaded by Hon Adeyemi, even before the arrival of supervisors, party delegates, party members, and other critical stakeholders who are expected to be on ground before commencement of the exercise.

In a statement unanimously signed by no fewer than 3 Chairmanship aspirants, Babalola Asimiyu, Kelani Abdulahi Sola, and Taiwo Adesina, out of the 9 aspirants in Lagelu and made available to newsmen, they alleged that the exercise was a total contraction of the principle of internal democracy, and what Governor Seyi Makinde as well as Oyo state PDP represents and therefore, dissociated themselves from the party primary which was marred by violence and gross irregularities that resulted to one of the aspirants, Honorable Olufemi Ajibade, being seriously injured and currently receiving medical attention at an undisclosed hospital.

The chairmanship aspirants in the statement explained that the aim of Gbadamosi going to the extent of mobilizing hoodlums and thugs to the venue of the primaries was to use the transport union members to wreck havoc on party members who had converged peacefully and conducting themselves in a peaceful manner for the purpose of electing who should represent them at the forthcoming local government election slated for May 15.

According to the three aspirants who spoke to journalists, no fewer than 3 other aspirants have withdrawn from contesting following being fearful for their lives and the fear of terror which has been speculated before commencement of the party primaries.

“We are not party to today’s disrupted party primaries occasioned by Hon Gbadamosi and his thugs from NURTW who besieged the venue of the primaries with over 200 boys who came in over 40 vehicles to create fear, cause violence, and hijack the exercise with the sole aim of making a kangaroo self pronouncement as winner of the primary.

“We call on Governor Seyi Makinde as the father and leader of our great party, our party leaders in Oyo state especially in Lagelu local government, to as a matter of urgency call this desperate fellow to order as we have completely dissociated ourselves from today’s process.

“We urge our party leaders and various committees of the party saddled with the responsiblity of monitoring local government primaries across the 33 local government to urgently reschedule a new date for Lagelu so that we can call peacefully without terror or intimidation participate in our party primary by exercising our rights as enshrined in the Nigerian Constitution,” the aspirants said.

The lawmaker representing Lagelu State Constituency at the Oyo state House of Assembly, Honorable Akintunde Olajide, in his reaction decried the disruption and described it as “desperation taken too far by any aspirants,”

AKT as he is popularly known however, called for calm stressing that nothing meaning can be achieved in any atmosphere of terror and violence urging other aspirants to ensure peace and orderliness in their various wards.

The lawmaker maintained that the party hierachy will surely look into the situation with the aim of ensuring be seen to deepened the spirit of equity and justice among party faithfuls.

“I understand the anger and frustration of our party aspirants following the disruption of today’s primaries by just one aspirant who had taken his desperation to the extreme. This is obviously nothing to call democratic process but we all know what our able governor and party leader stands for.

“Governor Makinde is the father of modern day democracy no doubt and the PDP remains the toast of other politicians so we will not allow anyone individual to attempt to subvert the collective will of our people by trying to superimpose themselves on the collective will of the party via instrumentality of political brigandage, violence, and sheer abuse of political opportunities,” AKT stated.

Hon Adeyemi, who is the current Caretaker Chairman of Lagelu West Local Council Development Area (LCDA) was however, not available for comment as at press time.