RECOVER WETIN? LET NIGERIANS BE WARY OF ATIKU ABUBAKAR’S SUGAR-COATED PROMISES, HE DOES NOT MEAN WELL 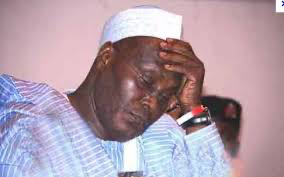 RECOVER WETIN? LET NIGERIANS BE WARY OF ATIKU ABUBAKAR’S SUGAR-COATED PROMISES, HE DOES NOT MEAN WELL

We need to warn Nigerians to be wary of the sugar-coated promises of former vice president, Atiku Abubakar and his Peoples Democratic Party as they embark on their inordinate and desperate campaign to gain power at all cost.

A party that should be eternally shameful about its appalling record in governance between 1999-2015 is now busy rewriting history, embellishing the locust years as if it was a golden era in our history.

Of course, this is fake history at its worse. We are not fooled. Nigerians should also not be fooled about the boldfaced lies, being articulated by the candidate and his party.

What is more shocking is Atiku’s audacity in standing up to ask for our votes despite what his boss, President Olusegun Obasanjo wrote about him in his book, ‘My Watch’. Obasanjo wrote that it would have been an unpardonable mistake “and sin against God to foist him on Nigeria”. Obasanjo still believes so till tomorrow.

Obasanjo still rues till today making Atiku his vice president in 1999, only to discover later,
“his shadowy parentage, his propensity to corruption, his tendency to disloyalty, his inability to say and stick to the truth all the time, a propensity for poor judgment, his belief and reliance on marabouts, his lack of transparency, his trust in money to buy his way out on all issues and his readiness to sacrifice morality, integrity, propriety, truth and national interest for self and selfish interest.”

We are, however, not totally surprised about Atiku’s latest desperation.

Aware that this is his last shot at the elusive presidency, Atiku, while on the hustings, has been spewing series of lies, making empty promises and presenting a false narrative about our present reality and the legacy of the 16-year ignoble era of the PDP administration, of which he was a principal actor.

He claimed at his rally in Abuja on Saturday that the country is not secure for trading and farming, a false narrative that he has been pushing around for some time, since he relocated to Nigeria from his base in Dubai, principally to contest the election.

We believe in his private moment that Atiku will concede that his view about insecurity is exaggerated. Our country is certainly better secure than in 2015 when the PDP allowed insurgents to seize 17 local councils in Borno and some four councils in Atiku’s home state of Adamawa State, when Abuja was under constant bomb attacks and people slept with eyes wide open. What further proof of progress made by the APC does Atiku need than the fact that he was able, recently, to carry his party men and women to Maiduguri to hold a rally, without any attacks by insurgents and bandits. Atiku can also drive smoothly from Yola, his state capital to Jada, his home town on a reconstructed road by the Buhari-led APC administration. The road was impassable for 8 years Atiku was Vice President and got progressively bad and totally cut off from civilisation until the Buhari government reconstructed it.

Atiku claimed that our country has the highest number of out-of school children in the world, without telling his audience that the problem, which was exacerbated by banditry in North West and insurgency in North East, took its root from the stewardship of his party when the population of out-of-school children phenomenally rose from 10.5 million in 2010 to 13.2 million in 2015.

The most grotesque of Atiku’s promise is that he will ensure that the ASUU stopped going on strike so that universities “reopen forever and ever.” Mr Atiku forgot to tell his audience that a PDP government in 2009 signed an agreement with ASUU, which it never implemented for six years, leaving the mess of the agreement for APC to deal with.

Meanwhile, as Nigerian universities were left to rot under the PDP’s watch , Atiku and his boss, President Olusegun Obasanjo opted to set up their own universities, ABTI-American University and Bell University, meant for the children of the rich.

A pointer that this former vice-president has not changed in his character as portrayed by Obasanjo was his promise to sell the newly commercialised NNPC Ltd and all its assets and subsidiaries for just $10 billion. Even before inviting bids, he had already undervalued the oil conglomerate, the way he undervalued Nigerian companies he was asked to sell, under the abused privatisation programme of the Obasanjo administration. Nigerians will remember that he made a similar promise in 2019, saying he would sell the NNPC to his friends and cronies. Surely, he retains the same mindset, though he has changed the terminology to ‘privatisation’.

In his campaign. Atiku’s refrain has been to tell the less discerning Nigerians that he is on a recovery and restoration mission in presenting himself to be elected.

The question every Nigerian must ask him in pidgin is: Recover Wetin?

Can the PDP ever be a recovery vehicle for our country, judging by its old record of service, when it spent $16 billion on power that only resulted in worsening darkness?

Can the party ever be a recovery vehicle when it also midwifed the privatisation of power distribution to cronies, also leading to more darkness.

Now the nation’s hope for uninterrupted electricity lies on the $2.5 billion Nigeria-Siemens deal, initiated by the Buhari administration.

We need to further ask whether the PDP is hoping to be a recovery vehicle for our armed forces, when during its stewardship, it diverted billions of dollars allocated for arms, into private pockets and marabouts. Our ill-equipped soldiers, were left to die as they faced guerrillas with superior weapons.

Today, the APC government of President Buhari has changed the misfortune of our armed forces and boosted morale with modern weapons, fighter jets, warships and others.

We ask again, can a party that cannot recover itself due to its internal implosion and crisis recover and rescue Nigeria? Let PDP rescue and recover itself and its abandoned national secretariat first. After raising over N20billion to build a national party office, PDP and its leaders plundered the money the same way they plundered our country.

Our advice to Nigerians is to ignore anything Atiku Abubakar says. He is a bloody liar and a desperate politician who should never be trusted.

Atiku is not coming to recover Nigeria from anything, he is only coming to restore it back into his pocket and those of his cronies.