As part of efforts by the Babajide Sanwo-Olu led administration to curb restiveness and promote sports and youth development in Lagos State, the Senior Special Assistants (SSAs) to Governor Babajide Sanwo-Olu have come together under the BOS Academy to organise the first edition of the BOS Youth Cup. 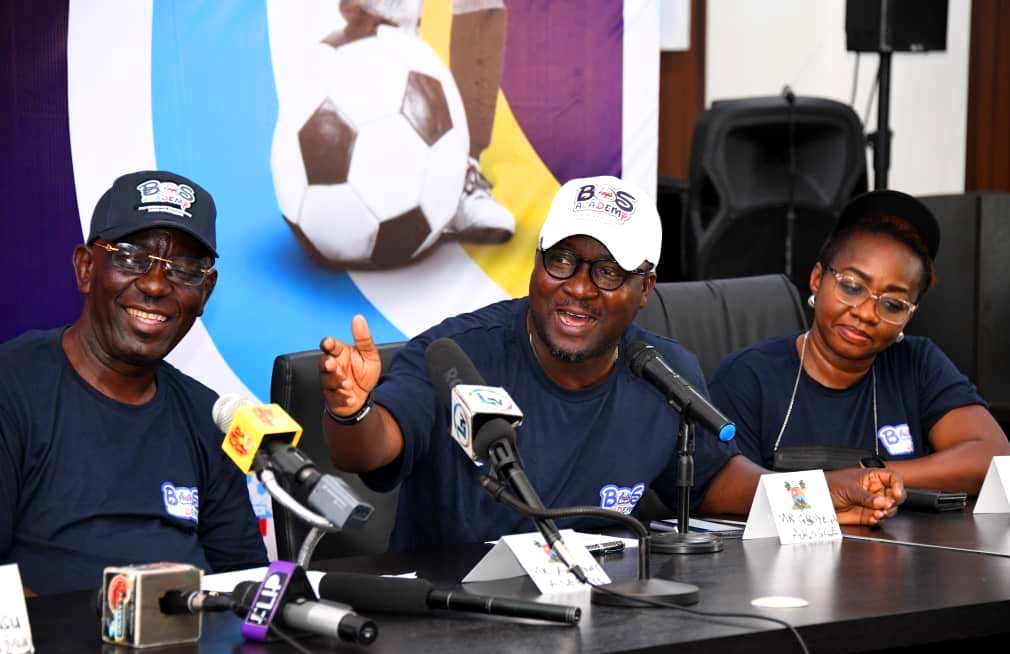 The maiden edition of the BOS Youth Cup would focus on football competition for youths under 21 years across all Local Government Areas (LGAs) and Local Council Development Areas (LCDAs) within the State.

The BOS Youth Cup like other youth-based strategies of Lagos State Governor, Mr. Babajide Sanwo-Olu, is one of the opportunities for the youths of the State to explore, achieve their potentials and come into the limelight, as well as unlocking the doors for discovering budding talents and serve as a catalyst for development of the local league and forming the pivot for recruitment into our National teams.

The competition will also empower many youths and further create business opportunities for other stakeholders with a multiplier effect on the State’s economy in line with the vision of the Babajide Sanwo-Olu led administration to actively engage the teeming youths of Lagos State for a more robust economic development.

Speaking at a press conference held on Sunday at the Bagauda Kaltho, Alausa, Ikeja, to kick off the football competition, the Senior Special Assistant to the Governor on Sports, Mr. Anthony Adeyinka Adeboye, disclosed that online registration is already ongoing through a dedicated website www.bosyouthcup.com.

Adeboye, who expressed optimism that new talents would be discovered that would impact positively on not just the youths but also on the State in the long run, said the final stage of the BOS Youth Cup would take place at the Mobolaji Johnson Sports Arena, Onikan, with Governor Sanwo-Olu himself handing the trophy to the winning team.

Adeboye said the ‘BOS Youth Cup’, which is one of the key programmes under Governor’s ‘THEMES’ developmental agenda strategically put in place ‘For a Greater Lagos’, will directly have positive impacts on individual families, the communities and the State at large.

He said: “Part of the vision of the Babajide Sanwo-Olu led administration is to actively engage the teeming youths of the State for a more robust economic development. This is a deliberate policy of Mr. Governor due to the very important position the youth demographic occupies in the country’s population.

“Records show that the youths occupy about 45 percent of Nigeria’s population and when broken down to States, Lagos has the highest number of the youth demographic in Nigeria, standing at 54 percent. To this end, Mr. Governor believes that the focus should be on the youth population hence the creation of many interventions across different spheres of life, speaking to the specific needs of the youths in the State.

“The Governor also recognises the myriad challenges facing today’s youth and as government, the Governor and his Executive team have vowed to tackle those challenges head-on in line with the ‘THEMES’ developmental agenda and Second Pillar, Goal 3 of the Lagos Resilience Strategy, which is a plan to prepare the youth for a changing economy.”

Speaking on the modalities for selecting players, the Chairman of the Lagos State Football Association Technical Committee, Mr. Dotun Coker, said trials for the tourney would commence from this week to select players representing each local council, while the grand finale of the competition would hold at Mobolaji Johnson Sports Arena, Onikan.

He said trials of eligible players with LASSRA cards and shortlisting of 23 players, comprising three Goalkeepers and 20 outfield players, will take place at LGAs/LCDAs level for Intra-scouting matches among the councils to select All Star Players for the 20 LGAs.

He said the 20 LGAs shall be transparently drawn into five groups of four teams each and each local government will play three matches in a legged league in their groups totaling six matches in a group.

According to Coker, the top teams in each group and three best Team losers will qualify for the Quarterfinal in a knock-out format leading to the Semi-Final, 3rd place and final matches.

He also disclosed that a seminar will be organised for key stakeholders in the 20 LGAs where the rules and regulations of the event will be explained to them, as well as clarifications on the controversial of and amendments on the Laws of the Game and First Aid Medicals.

The Head of the Technical Committee also disclosed that there would be an engagement of experienced sports medical personnel including ALS Ambulances for the competition, adding that the competition will create a pool of Ambassadors to better Lagos State and Nigeria in general.

Mr. Coker also explained that the tournament is designed to be ranked by the various football governing bodies with a view to making it an international event in the forthcoming years.

In his remark, a 1996 Olympic Gold medalist in football and former Super Eagles goalkeeper, Mr. Joseph Dosu, who thanked Governor Sanwo-Olu for prioritising sports development, commended the SSAs for organising the tournament and expressed hope that it would lead to the discovery of talents just like his.

He also commended the commitment of the Governor for bringing the national team back to play at the Teslim Balogun Stadium, Surulere and the Mobalaji Johnson Stadium, Onikan, adding that the development has revived football in Lagos.

Also speaking, a licensed football intermediary, Otunba Adedapo Kujore-Olowu stated that the tournament is one of the things greatly needed by youths in Lagos at this time, adding that the initiative would be veritable source of nurturing young talents to become great asset for the State.

In her words, the Senior Special Assistant (SSA) to the Governor on Administration, Mrs. Titi Oshodi, said the initiative is borne by the need to bridge the gap between the youth and the government, noting that activities would be channeled through the local governments for registration processes.

The SSA to the Governor on Public Private Partnership (PPP), Mrs. Oluwatuyi Osayemi, called for partnership from private stakeholders stating the initiative would “contribute to the quality of lives of all Lagosians.”

She maintained the benefits would transcend just the youth demography but would broadly stand as a veritable ground for the corporate world to market their brands.

Osayemi also assured of the readiness of the Government to extend hands of fellowship to bring corporate entities on board for partnership.