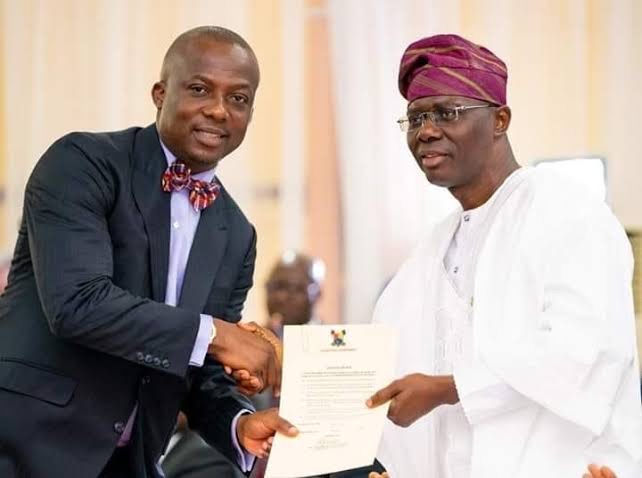 Lagos State Governor, Mr. Babajide Olusola Sanwo-Olu has formally launched a collaboration between the Lagos State University (LASU) and an American based University, Cornell University New York for 16 professional certificate programmes to be jointly run by the two Universities.

Speaking at the virtual launch ceremony, Governor Sanwo-Olu, stated that the establishment of LASU/Cornell University Post Graduate Professional certificate programmes was aimed at giving prospective students across the country an opportunity to gain global skills and professional expertise that will not only make them relevant and employable, but globally competitive in the 21st-century digital economy.

The Governor noted that the decision to collaborate with Cornell University, rated to be one of the best leading universities in the world, was borne out of the desire to keep and sustain LASU’s present pedigree and high academic profile as the second-best University in Nigeria and one of the best 600 in the world.

His words: “The State Government’s resolve to collaborate with Cornell University, one of the world-class Universities, renowned for its excellence in innovation, entrepreneurship skills development, research practice and human resource development, is borne out of our desire to keep and sustain LASU’s pedigree and high academic profile as the second-best University in Nigeria and one of the best 600 Universities in the world. According to Times Higher Education Impact Ranking for the Year 2020 and Year 2021 Emerging Economies University Ranking”.

He averred that LASU/Connell University collaboration is a further demonstration of his administration’s commitment to the implementation of quality and sustainable policy that would not only meet the educational needs of the citizenry, but act as a catalyst for individual growth and rapid socio-economic development.

While assuring that the State government would closely monitor all the treaties and agreements under the collaboration to ensure there is no breach of trust, the Governor appealed to the foreign partners to give LASU/Cornell collaboration all necessary support and professional advice that would not only enhance LASU’s present ratings, but make it a university of first choice in Africa.

In his remarks, Cornell University Vice president, Professor Paul Krause, stated that Cornell University was ready to partner LASU to run 16 professional certificate courses that would help to build the capacity of prospective LASU students through exposure and highly impactful training.

He noted that globally, Cornell University is one of the leading institutions in entrepreneurship skills development, innovation and creativity, management, leadership training, engineering, data science and statistics, promising that the University would design a  programme content to impact on the productivity of the students.

The Acting Vice-Chancellor of LASU, Professor Oyedamola Oke, disclosed that the collaboration process had started about three years ago during the tenure of the former Vice-Chancellor, Professor Olanrewaju Fagbohun in furtherance of the University’s academic excellence.

He noted that the collaboration would give LASU professional certificate programmes an international outlook, noting that it would also add value and bring improvement to the quality of learning.

Earlier in his welcome address, the Special Adviser to Governor Sanwo-Olu on Education, Barrister Tokunbo Wahab, disclosed that Cornell University had collaborated with LASU to jointly run 16 professional certificate programme in a wide range of topic areas including Leadership Training, Business and Finance, Management, Project Management, Health Care, Human Resources Management, Marketing and Engineering among others.

Wahab explained that the programme was aimed at helping  participants to gain relevant professional skills that would help them build a career in today’s  global economy, become more relevant and globally competitive.

The highlight of the event was the registration of Governor Sanwo-Olu as the first student for a Post Graduate professional certificate in a leadership course.