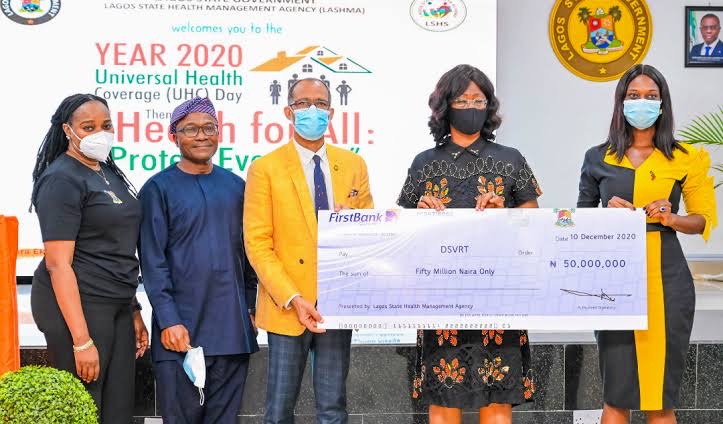 Wife of the governor, Dr. Ibijoke Sanwo-Olu, who disclosed this, yesterday, at the celebration of the Year 2020 Universal Healthcare Coverage (UHC) Day organised by the Lagos State Health Management Agency (LASHMA), said that the development became necessary in view of the fact that the government recognises that not everyone can afford the premium of the LSHS.

Dr. Sanwo-Olu, represented by a former Permanent Secretary in the state, Dr. Bola Balogun, said: “It is gratifying to note that the governor appreciates the fact that not everyone can afford the premium, and has approved the release of funds from the equity to provide free healthcare within the Lagos State Health Scheme for 50,000 orphans, elderly and vulnerable.”

The governor’s wife said that the theme of the celebration – “Health For All: Protect Everyone,” was apt and timely, coming at a time the world was still grappling with sordid realities of the novel coronavirus pandemic, and the need to ensure that deliberate policies were put in place to safeguard the health of all.

He said virtual clinics would also be established as standalone units, while telemedicine units would also be set up within the Lagos Health Scheme empanelled Primary Healthcare Centres in collaboration with interesting startups and NGOs.

We would also register and enrol a target 1,000,000 households – which translates to approximately 3,000,000 residents in Lagos within an 18-month timeline in the LSHS.

Earlier, LASHMA Chairman, Dr. Ade Alakija, said COVID-19 had underscored the need for universal health coverage, saying the pandemic had clearly shown that a threat to one would eventually prove to be a threat to all, and that “it would be gravely unwise to continue to think of quality healthcare as a tradable commodity.”