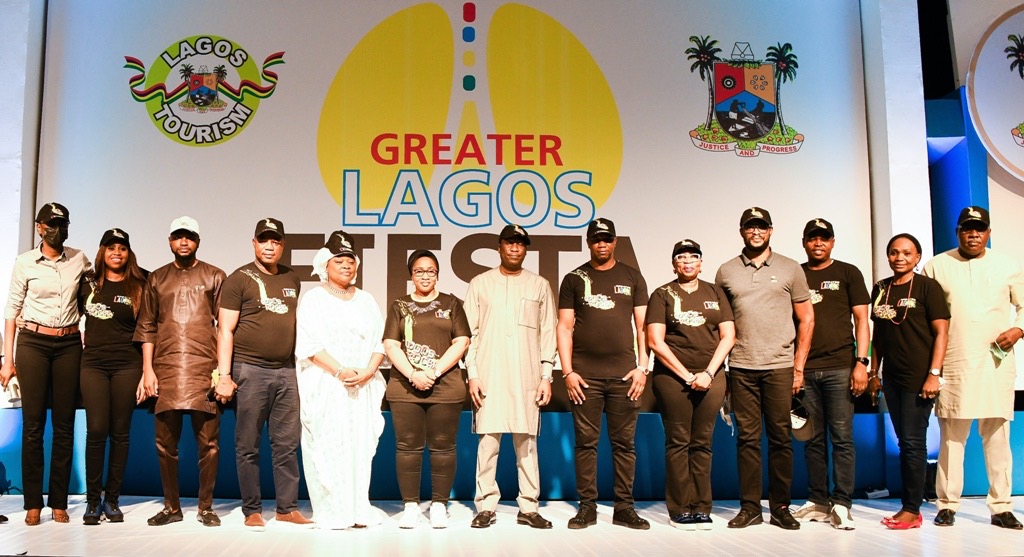 Lagos State Governor, Mr. Babajide Sanwo-Olu, has urged corporate organisations and Lagosians to partner with the Lagos State Government through the Ministry of Tourism, Arts and Culture for the 2021 Greater Lagos Fiesta holding in December.

He said the partnership between government, corporate organisations and individuals will boost the State’s economy and generate incomes for organisations that key into the Greater Lagos Fiesta.

Speaking at the 2021 Greater Lagos Fiesta Activation Ceremony at Eko Hotel and Suites, Victoria Island on Friday, Governor Sanwo-Olu, who was represented by his deputy, Dr. Obafemi Hamzat, said government cannot do it alone, therefore, the State needs partnership with organisations and individuals for growth and development of tourism, arts and culture sectors.

He said Lagos State is working hard to vaccinate four million people before December and therefore urged people to visit government accredited centers to receive COVID-19 jab, which has already been provided by the Federal Government.

In his address, the Commissioner for Tourism, Arts and Culture, Mrs. Uzamat Akinbile-Yusuf, said the Greater Lagos Fiesta which had passed through different stages and nomenclature since its inception years back serves as the end of the year entertainment event that most Lagosians, Nigerians and the entire world look up to as the year comes to a close.

The Commissioner said her ministry is working with Ministry of Health and Lagos Safety Commission to ensure that all health and safety protocols are put in place during the fiesta and therefore appealed to the public to take their COVID-19 vaccination as the Ministry will only allow vaccinated persons into the venue of Greater Lagos Fiesta events.

She said: “With this year’s theme of the Greater Lagos Fiesta tagged ‘Lagos Rocks’, Lagos State Government will be hosting a 31-Day massive experience of entertainment, awe and inspiration, the likes of which has never been seen before in Nigeria from 1st December 2021 till the end.

“The State Government will be using the Greater Lagos Fiesta to further transform Lagos into a major African tourism and entertainment hub by exploring and promoting the potentials that abound in the State, as well as integrating the thriving Entertainment and Arts industry as a viable platform to attract visitors and create job opportunities.”

The Commissioner urged private organisations and individuals to take advantage of the ample opportunity of the Greater Lagos Fiesta and key into the 31-day calendar event.

According to her, some of the programmes highlighted for the Greater Lagos Fiesta are cultural performances and opening concert, cycling competition, fashion show, food festival and opening ceremony of Souk Village, Lagos Marina Day and Greater Lagos Concert – five days back to back concert in all the five divisions of the State.

She said arrays of A Artistes, Music Icons, Artistes, best of Comedy, DJs, Dance Performance, Talent Hunt, among others would participate during the concert to further demonstrate that Lagos is the centre of entertainment in Africa and ‘Lagos truly Rocks’

Speaking at the event, the Special Adviser to the Governor on Tourism, Arts and Culture, Hon. Solomon Bonu, said the Greater Lagos Fiesta is a reflection of Governor Babajide Sanwo-Olu’s love for tourism, arts and culture in Lagos State.

He said the fiesta will pay attention to indigenous culture and give it a prime place in the Greater Lagos Fiesta, adding that the fiesta will attract more visitors to Lagos.

The Managing Director/Chief Strategist, Chain Reactions, Mr. Israel Jaiye Opayemi, said the Greater Lagos Fiesta over the years served as the unifying platform to promote entertainment, commerce, arts and culture among the people of Lagos State.