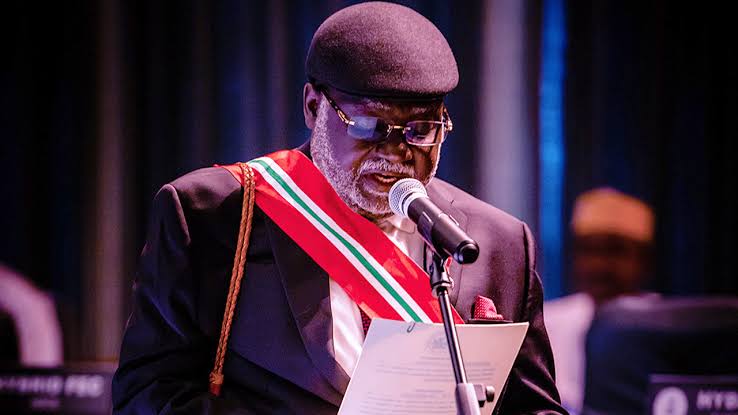 – Describes him as an outstanding constituent

Senator Buhari Abdulfatai of Oyo North has felicitated with his kinsman and newly sworn-in Chief Justice of Nigeria, Olukayode Ariwoola whom he described as a constituent with outstanding attributes.

The lawmaker who represents the people of Oyo North including CJN Ariwoola expressed his heartfelt gratitude to God for the grace given to Oyo North Senatorial District to have produced the number one person in the Judiciary of Federal Republic of Nigeria in a press release issued and made available to journalists in the early hours of today.

The Legislator popularly called Omoluabi joined other notable Nigerians in rejoicing with the CJN, Nigerians, Oyo State, Oyo North, Oke Ogun and Iseyin local government area of the country for having an outstanding personality and a man of pedigree and integrity to steer the affairs of the Judiciary in the country.

“I am confident, judging by the brilliant professional records of my enviable brother, Olukayode Ariwoola that he is going to contribute appreciatively towards the development of the country via the judicial system,” he stated.

He added “It is a thing of joy especially for me as a Senator representing the entire people of Oyo North that it is during my tenure as their representative in the Senate that one of us from the district clinched the Pinnacle of his career to have become the CJN of the Federal Republic of Nigeria”.

Senator Buhari specifically lauded President Muhammodu Buhari for maintaining the existing processes of emergence of CJN in the country.

He stressed “on behalf of the entire people of Oyo North, I say thank you to President Buhari while we pledge that the country is not going to regret appointing one of us, Olukayode Ariwoola as the Chief Justice of Nigeria”.

The lawmaker also congratulated constituents in Oyo North on this very rare opportunity given to us by God as he charged them to always pray for CJN Ariwoola to be guided and guarded accordingly in order to use the position to better the lives of Nigerians as enshrined in his roles as the Chief Justice of the country.