• Our fathers were in the army but died poor, they say 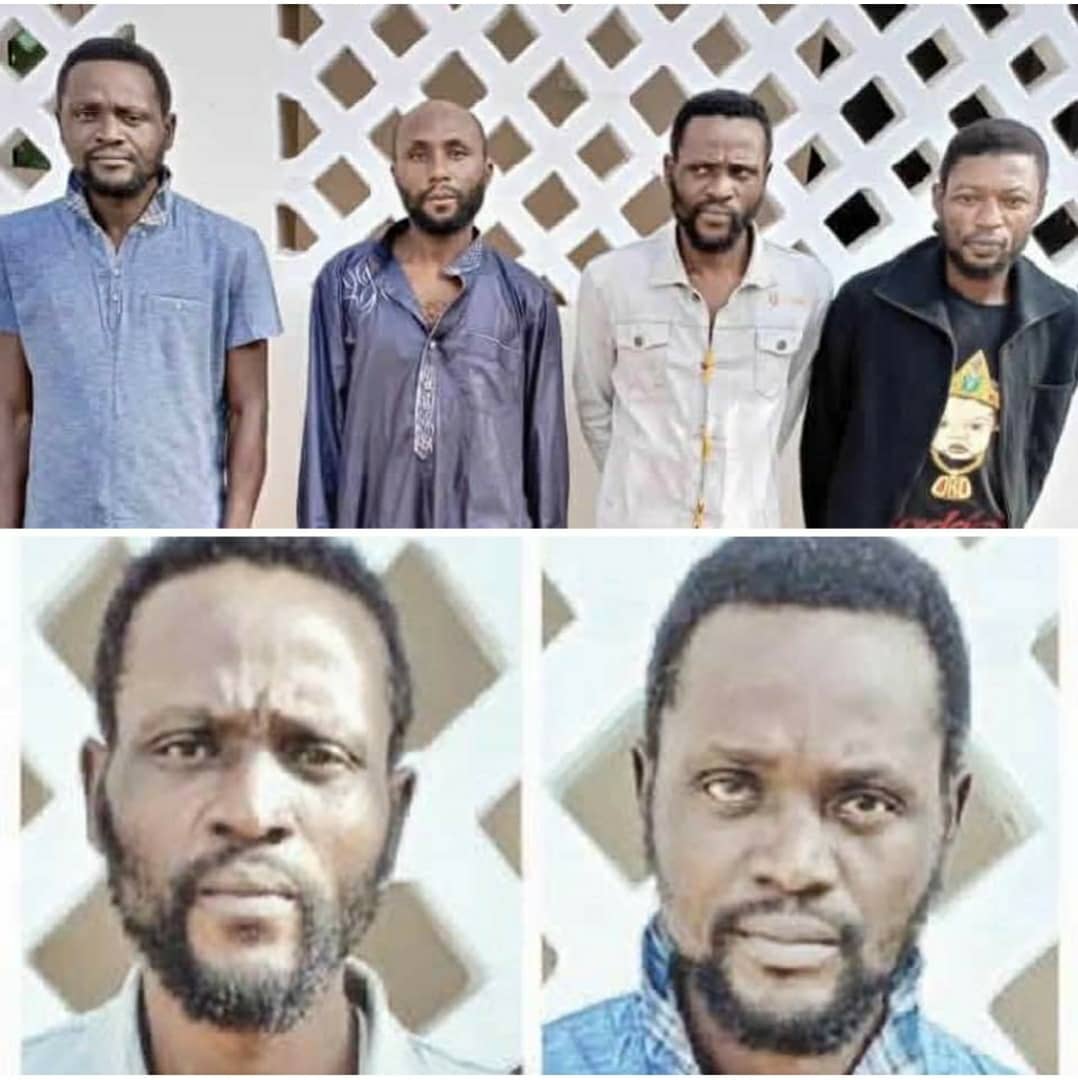 Operatives of the police Intelligence Response Team (IRT) Led by DCP Abba Kyari ran into a dilemma last week. They had tracked and arrested in a Lagos hotel, four armed robbery suspects said to be planning to rob unsuspecting people by posing as soldiers, bus drivers, conductors and passengers at the same time.

Out of the four, two looked alike so much that the detectives initially had some difficulty detecting who was who. But they soon got to know why in the course of interrogation: they discovered that they were identical twins born to the same parents. In fact, they so resembled each other that, but for the fact that they were into the same crime, the police would have probably had the same difficulty detecting and arresting the real culprit, assuming that only one of them was an armed robber, and the other was not.

But as it turned out, the twins – Taiwo and Kehinde Ojomo are into armed robbery. Aged 29, they hail from Oke Oka, Ondo State. At the moment, the two young men, children of a retired soldier, live with their mother in the Ojo Military Cantonment, Lagos.

According to a police source, they were nabbed at a popular hotel in Isheri-Idimu in the Alimosho Local Government Area of the state while perfecting plans to attack motorists later that night. They were arrested along with Peter Samuel, 22, and Emmanuel Bamidele, 29. Surprisingly, they are all children of retired soldiers. United by poverty and greed, as they claimed in their confession, they decided to embark on the job of robbing others.

And, in doing so, they employed brains, guns, military camouflages, subterfuge and deception. Armed with those weapons, they were able to rob innocent victims either of their phones and other valuables or of their cars. Taiwo is a bus driver, Kehinde, a car mechanic and Peter Samuel, a cobbler. But they felt that taking to armed robbery would pay more dividends and grant quicker financial returns than staying on an honest living. At the moment, though, according to their confessions, they are regretting their decisions.

Why and how we went into crime
–Taiwo

Giving an insight into why he took to armed robbery, Taiwo said: “My father was a retired soldier. He died when we were in junior secondary school. Because of the nature of his job, my mother was asked to stay at home and take care of us. She was left to tend a small farm inside the army barracks, Ojo, where we currently live. When my father died, his pension, which came years later, was not enough to set up a business for our mother. This was why she advised us to drop out of school and learn a skill. I decided to become a bus driver while my brother became a mechanic. To make the two ends meet, she works as a contract staff with the Lagos State Waste Management Authority (LAWMA).

“Some years ago, I complained to my twin brother of how things were difficult at home and he promised to show me the way. We started by picking pockets before we graduated into armed robbery. In the barracks, it is easy to get camouflage uniform and my late father had many of them. As a bus driver, we normally rob passengers early in the morning or late at night. Our gang members would pose as passengers in the bus or we would pick victims along the way. The camouflage would be worn by one of us so that our targets would assume that it is safe to board the bus since there is a soldier inside. We usually operate on lonely routes like Abeokuta Expressway, LASU-Igando, Oshodi and Ikorodu roads.

“Kehinde now has his own gang while I have mine. We thought it was necessary so that we will not be caught at the same time. Whenever he wants me to assist him, I would go and join his gang.”

On the day of their arrest, Taiwo said that he was invited by his brother to plan an armed robbery operation that was to take place that night along LASU-Igando route.

“I was at Grace Hotel in Idimu with my twin brother, Kehinde and Samuel when policemen burst into our room and arrested us. Kehinde invited me that day to help them drive their operational vehicle. I know that it is a shame that my brother and I are robbers. Police should please forgive us.

“Although we made money, the highest that I have gotten is N100, 000. Samuel and Bamidele Emmanuel are my gang members and it is his job to sell the valuables that we got during each operations. He has customers at Alaba International Market where valuables like phones and other electronic gadgets are easily sold. The weapons that we use in operations belong to all of us. We all contributed money and bought the double barrel guns from one Alfred who lives in Cotonou. He brought the gun to Nigeria for us. We usually hide the weapons inside my car so that even if police decided to search our house, they would not find anything. Unfortunately, policemen from IRT forced me to show them the part where the weapons were hidden. I kept them under the dashboard of my car.”

Our criminal exploits and experiences
–Kehinde

In an interaction with Saturday Sun, Kehinde confirmed his twin brother’s story. “I was born in Owerri, Imo State, but we later relocated to Lagos,” he said. “Taiwo is my twin brother and both of us dropped out of secondary school after our father who was a soldier died. No one saw it coming, so we were left without kobo except accommodation that was given to us at the military barracks. I was satisfied with the little that I was making as a mechanic till I met one Cyril who was my secondary schoolmate. We formed a three-man gang: Cyril, Magaji and myself.

“It was after some months that I decided to involve my twin brother. I couldn’t keep such secret from him. He kept asking where I got money and I had no choice but to show him the way. Along the line, we felt it was necessary to separate so that the police will not catch us together. Unfortunately, the day I wanted to help his gang was the day police arrested us.”

Asked to comment on their exploits, he said: “We had attacked several persons along Oshodi Bridge at night. It was there that we snatched the Toyota Corolla that my brother is using. The camouflage that was found with us is just to deceive people and rob them, I am not a soldier. I normally use my late father’s ID card to pass any checkpoint where people or police challenged me. But I thank God that we have not killed anybody since we started operating. I was pushed into crime because of greed. I am ready to help police arrest the rest if they will forgive me,”

Story of the other two accomplices

Poverty drove him into crime, claimed the third suspect, Samuel. “I live at No. 13, Ita Oluwo Street, Ikorodu,” he told Saturday Sun. “I am a cobbler by profession. I did not have the opportunity to go to school because I lost my mum when I was a teenager. My father is a retired army officer and while he was in service, he served at Ikeja military cantonment. He is currently working as a security officer at Ajah, Lagos, but his income is not enough for his upkeep not to talk of us.

This was why I moved to Ikorodu to live with my brothers and sisters. I met Kehinde about four years ago and he is now my best friend. We normally meet at an Indian hemp joint at Oshodi to smoke and discuss the way forward. It was two months ago that he told me that he wants to snatch a car for our usual robbery operation.

“We took a toy gun and at about 9pm we stopped a cabman and told him that we were going to Iyana Ipaja. To further convince him, we paid the fare without bargaining. But along the route, close to Mile 2 Bridge, we forced him to stop and took over the car. This was how Kehinde got his own car. We did several operations before I decided to go my own way and form my own gang. We could no longer agree on the sharing formula because Kehinde was giving me peanuts. I formed my own gang and we were able to snatch one Sienna bus. Unfortunately, police saw where we parked it and confiscated it. But we could not go and claim it because we did not have documents.”

The fourth suspect who also claimed to be the son of a retired soldier said he started robbery as far back as 2016. “I am from Lagos State. I was also at the hotel when police came to the place and arrested us. I live in the barracks with my parents,” he said.