Tegbe Felicitates With Soun On His 95th Birthday

Founder of Tegbe Foundation, Mogaji Olasunkanmi Tegbe has commemorated with the Soun of Ogbomoso, Oba (Dr) Jimoh Oyewumi, Ajagungbade III on the occasion of his 95th birthday. 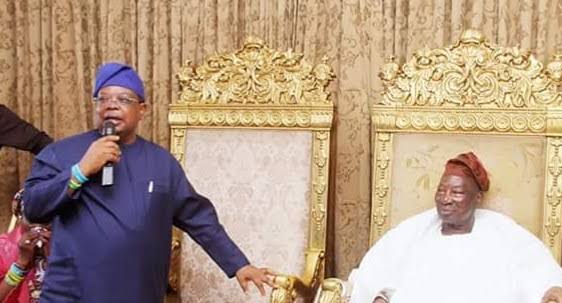 Tegbe described Kabiyesi as an icon of peace and development under whose reign Ogbomoso has witnessed unprecedented development economically, socially and politically.

Tegbe, who is an alumnus of Federal Government College, Ogbomoso and also married to an Ogbomoso indigene and a daughter of the late former Minister, Alhaji Oladunni Ayandipo of Alubata compound, Ogbomoso, referred to the revered monarch as his father. He recalled, with nostalgia the role the royal father played as the Father of the Day at his wedding ceremony about 3 decades ago.

He prayed that God adds to the years of the monarch, so Ogbomoso land and the whole Oyo State continues to benefit from the huge repository of wisdom and knowledge, which Kabiyesi exemplifies.