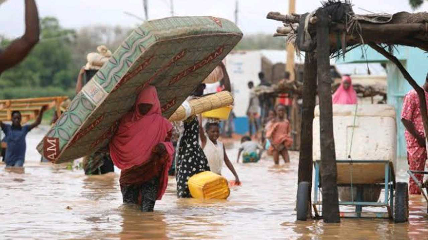 Presidential Candidate of the All Progressives Congress, Asiwaju Bola Ahmed Tinubu, has mourned the death of 51 people who lost their lives in the recent flooding that occurred in Jigawa State.

Many communities across the state were affected and four local governments were badly hit by the flood caused by heavy rainfall rendering hundreds homeless and killing 51 people.

Tinubu in a statement Saturday by his Media Office described the tragedy as devastating.

In a letter he wrote to Jigawa State Governor, Alhaji Abubakar Badaru, the former Lagos State Governor hoped for a speedy recovery for all the injured.

He assured Governor Badaru of his readiness to stand with him and the people of the state as they rebuild.

Tinubu encouraged everyone to remain strong even in the face of the challenges they are currently facing.

“Particularly saddening is the revelation that the flood claimed 51 precious lives and destroyed valuable properties. Please accept my sympathy and condolences over this sad and unfortunate incident, and the lives lost.

“While this tragedy will certainly take its toll on us in the number of lost human lives that can never be regained and lost properties that may never be fully replenished, this moment calls on us to be strong and courageous to help the victims through this dark period.

“We stand with you and the good people of Jigawa State at this troubling time. May Almighty Allah comfort the families of those who lost their lives in the flooding, even as the government works to ameliorate the pains of this tragedy on them and on those who lost valuable properties,” the APC presidential candidate wrote.