HE IS A POLITICAL PHENOMENON….| Akeem ADENIYI Adeyemi 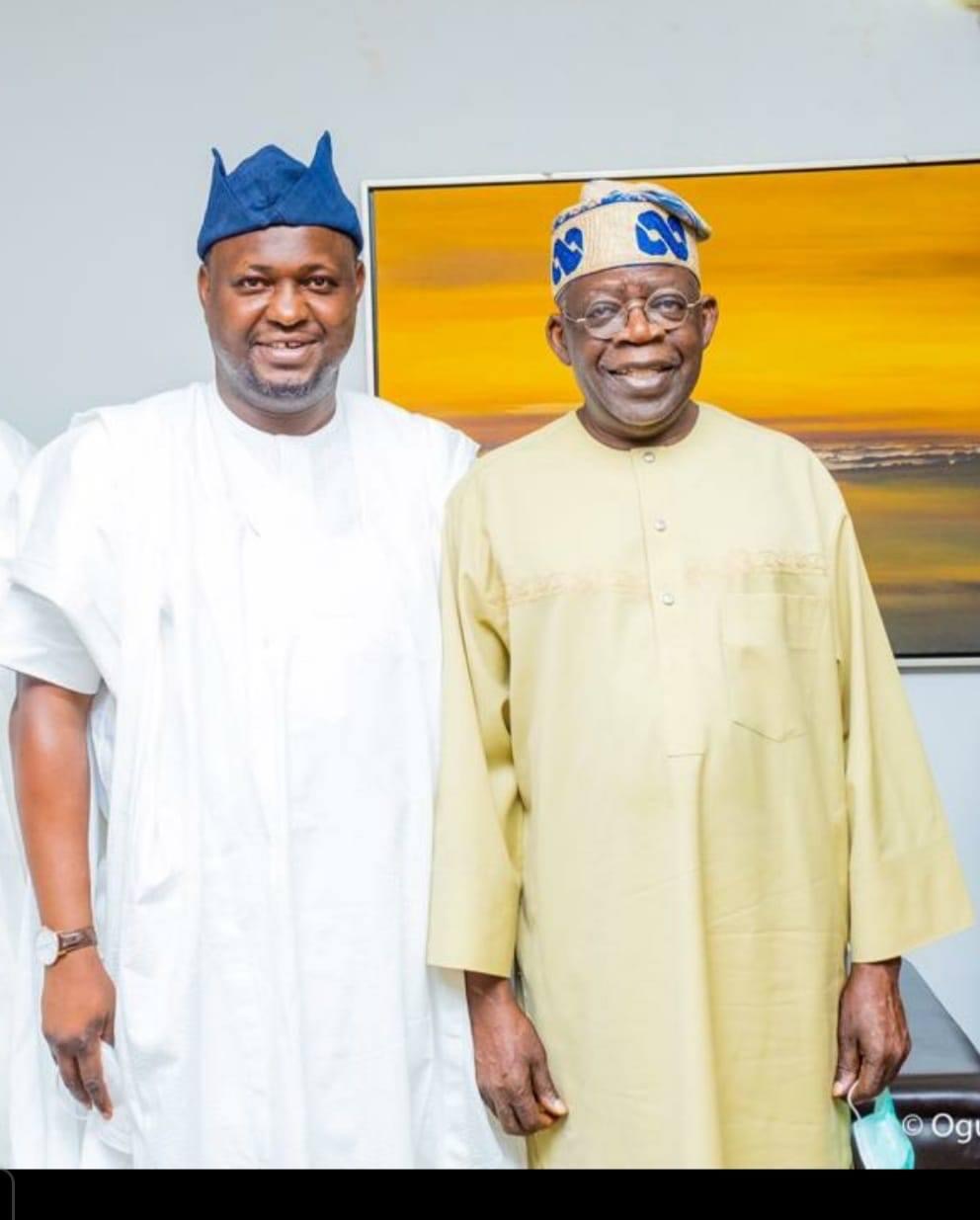 It is an incontrovertible fact that Asiwaju Bola Ahmed Tinubu, the Jagaban of Borgu, is one unique Nigerian personality with imposing features, strides and achievements. He is politician, businessman and leader of thought. Within the span of twenty-three years, Asiwaju has risen to become the Generalissimo of Nigerian Politics.

As we fondly refer to him as the Jagaban, Tinubu is undoubtedly rated as one of the most influential politicians in Africa of the 21st century. Asides cloaking himself in the garb of Chief Obafemi Awolowo, Asiwaju is seen in the mould of Julius Nyerere of Tanzania, Nelson Mandela, the Great Madiba of South Africa, Ahmadu Bello, the Sardauna of Sokoto, and the Great Zik of Africa, Dr Nnamdi Azikiwe. These were great men, who liberated their people from the clutches of oppression and colonial imperialism.

Interestingly, another fact about Asiwaju is that there are varied perceptions about him; from being the new Awo of Yoruba politics, an astute businessman, to a tactical politician. It is crystal clear that he is uniquely prominent and relevant in the scheme of the 4th Republic political calculation.

Ladies and gentlemen, in this presentation, we explore five reasons why Asiwaju Bola Tinubu is a political phenomenon in Nigeria and why he deserves to be the next president of Nigeria, come 2023.

HIS ANTECEDENTS
Senator Bola Ahmed Tinubu has been a dogged and resilient fighter, who is firm and resolute on his wants and beliefs. In 1998, he was among the diehard socio-political group (Afenifere), insisting that Nigeria needs a true and participatory democracy. In those trying periods, many NADECO members, who fled Nigeria as a result of persecution of the military junta, took haven in Tinubu’s house in the United States. It is part of history that the said house was a hostel of sort for all human rights and democracy activists of Nigeria origin. Asiwaju damned all consequences by putting up a resistance to the military junta of Late Gen. Sani Abacha, risking his life and businesses at the detriment of his wellbeing.

This, eventually, gave him the leverage and capacity to re-launch into the new political frontier of the 4th Republic, where he became a foundational member of the Alliance for Democracy (AD) and emerged the first civilian Governor of Lagos State in this extant Republic. His leading roles as a strong opposition leader, asides Gen Muhammadu Buhari (Rtd), is a strong testimony to his political resoluteness and forthrightness. He stood out as a towering reference among other politicians, as he vehemently refused to collapse his political structure to join the then ruling party, the Peoples Democratic Party.

When his administration was at loggerheads with the Federal Government over statutory allocations, due to the creation of LCDAs, he was firm and unwavering to the manipulative antics of the then Obasanjo administration. Asiwaju Bola Tinubu, rather than lamenting and crying foul, deployed his business dexterity, with the cooperation of his virile economic team, devised means of surviving the Obasanjo onslaught, by deploying new strategies for internally-generated revenue for Lagos State, so as to pay workers’ salaries and fund several State projects.

He never wavered, for once, in his constructive criticism of the PDP-led administration of sixteen years. Tinubu was also an insubmergible and loud voice in tackling the programmes and policies of the PDP misrule in Nigeria while it lasted.

HIS POLITICAL CLOUT
Permit me to take you down the memory lane exploits of Asiwaju Bola Tinubu at the eve of the 2015 general election. These efforts yielded many positive results and strategically placed the Jagaban of Borgu on a high pedestal of national politics and elevated his political clout from erstwhile regional to national level.

The above assertions underscore Tinubu’s political influence on national stage. The enormous clout he wields accounted for the following achievements:

– In 2007, Tinubu formed the Action Congress (AC). He handed the party’s chairmanship seat to Chief Bisi Akande and adopted Alhaji Atiku Abubakar to fly the presidential flag during the general election.

– In 2011, after the transformation of AC to ACN, he offered Mallam Nuhu Ribadu the party’s platform to contest the presidential election.

– He was a key force in the merger of his Party, the Action Congress of Nigeria, with other parties like the CPC, factions of APGA and ANPP.

In 2015, among the prominent founders of the All Progressives Congress, APC, alongside Major General Muhammadu Buhari, was Asiwaju Tinubu. In spite of this fact, he held no position, neither as the Party’s Chairman nor a member of the NWC. Tinubu is the most unambitious politician I have ever known. What a selfless leader Tinubu is!

– His strategic political roadmap of aligning the West with the North was key to APC’s victory in the 2015 general elections.

– Against all odds, he ensured the emergence of his preferred candidate, Gen Muhammadu Buhari (Rtd), as the presidential candidate of the All Progressives Congress, APC.

A MAKER AND MANAGER OF MEN

This short description of Tinubu’s political voyage will not be complete without highlighting his impacts and contributions to the development and empowerment of great men in Nigeria’s politics.

– Asiwaju Tinubu was instrumental to the choice of Prof Yemi Osinbajo as APC vice presidential candidate in the 2015 election. A man who had already gone through his mentorship as the Attorney General and Commissioner for Justice, Lagos State.

– His Excellency, the Minister of Works and Housing, Mr Babatunde Raji Fashola, passed through Tinubu’s tutelage. First, as his Chief of Staff. Then, with the support of Asiwaju, Fashola became the Governor of the most economically-vibrant state in Nigeria.

– His Excellency, Ogbeni Rauf Adesoji Aregbesola, the Minister of Interior, served as Tinubu’s Commissioner of Works before going back to his state of origin to contest the governorship seat. With the support of Bola Ahmed Tinubu, Aregbesola became the governor of Osun State.

– The contributions of Tinubu to the political success of the former Minister of Solid Mineral, Dr Kayode Fayemi, cannot be overemphasized. Asiwaju toiled day and night to mobilise support, both in cash and kind, for the emergence of JKF as the governor of Ekiti State.

– His Excellency, Alhaji Lai Muhammed, the Minister of Information, had first served, meritoriously, as Asiwaju’s Commissioner in Lagos State before becoming APC’s Publicity Secretary and, eventually, a minister of the Federal Republic of Nigeria.

– His Excellency, the late Senator Ishaq Abiola Ajimobi had a fair share of Bola Tinubu’s political influence and generosity. He contested and won the Oyo State gubernatorial election on the platform of Tinubu’s Party, Action Congress of Nigeria (ACN). The late Ajimobi became the Deputy National Chairman of the ruling All Progressives Congress (APC) with the support of Asiwaju.

– His Excellency, Senator Ibikunle Amosun became the governor of Ogun State on the platform of Action Congress of Nigeria, as well. Against all odds, Senator Amosun emerged victorious, with kind support of the Jagaban.

– The galaxy of stars who got their groove from Tinubu is unending, including people like Senator Opeyemi Bamidele, through whom Fayemi got into the Tinubu political enclave; Mr. Ben Akabueze; Joe Igbokwe; Mr. Sasore; Femi Pedro and Senator Musiliu Obanikoro.

Tinubu’s political philosophy is that of making and enthroning men of great minds in position of authority, rather than empowering mediocres. His altruism and selflessness in building men of sound and impeccable intellect are unparalleled. In 2007, Asiwaju Tinubu personally handed his senatorial ticket to Senator Ganiyu Solomon. This is rare and uncommon in Nigeria’s political terrain.

A BRIDGE BUILDER
The ability to make friends across all divides is a reflection of someone’s innate wisdom. Tinubu is a bridge builder, who believes in the indivisibility and oneness of Nigeria. All over the Nation, he has made friends, allies, loyalists and supporters across all divides. I make bold to say that Tinubu is a detribalised Nigerian, who sees everyone as equal. His contributions towards the propagation of both Islam and Christianity are unquantifiable. Worthy of note is the fact that Asiwaju’s wife, Senator Oluremi Tinubu, is a pastor. On the day of her ordainment, Asiwaju Tinubu was in attendance. Also, his love admiration for our royal fathers and traditional institution are enthralling.

From the West to the East and to the far North, Asiwaju has bestridden the political landscape of Nigeria like a colossus. His enigmatic proclivity, unwavering generosity, undefiled dexterity and cerebral acuity have distinguished Bola Tinubu as one of the foremost Africa’s leaders of thought, whose impacts will remain indelible in the mind of people of the Black Race. Little do we wonder why Tinubu is a friend to many African leaders and heads of governments.

There is nothing as interesting as achieving your dreams, and Senator Bola Tinubu will relish the fact that his Party, the APC, has broken the jinx, by becoming the first party that will have both the government at the centre and in Lagos State. Indeed, Lagos’s and Nigeria’s political histories will be incomplete, if the invaluable contributions of Asiwaju Tinubu are not acknowledged.

Tinubu governed the commercial capital of Nigeria, Lagos, and laid the solid foundation for the unprecedented growth of Africa’s 5th economy. Doesn’t Nigeria deserve the Lagos prototype? Doesn’t Nigeria deserve someone who will continue the landmark achievements of Buhari in rail transportation, agricultural revolution to mention but a few.

Ladies and gentlemen, the above-stated facts underscore the need for Asiwaju Bola Ahmed Tinubu, come 2023, to succeed His Excellency, President Muhammadu Buhari as president, Federal Republic of Nigeria. This is the right moment every well-meaning Nigerian should rally support for Tinubu. It is a payback time, when all his beneficiaries deploy all positive weapons in their arsenal for the realisation of this lofty goal. Let us support this beautiful cause. We shall not regret it. God bless Nigeria.