Even as it remains a collective struggle to build a nation with the bricks of mutuality, plurality and tolerance, the media, as gatekeepers in the fourth estate, must demonstrate a greater awareness of the society, while upholding the principles of balance, objectivity and fair-hearing, according to Vice President Yemi Osinbajo, SAN. 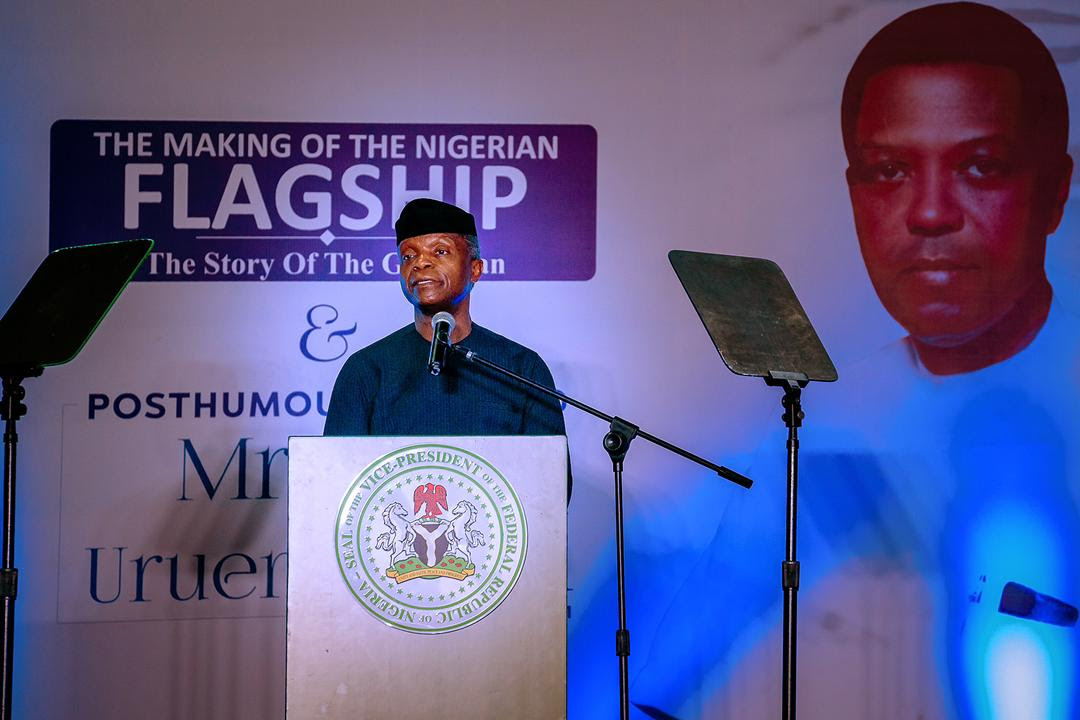 Prof. Osinbajo stated this on Thursday evening during the book launch and presentation of “The Making of the Nigerian Flagship, the Story of The Guardian,” which held at the Federal Palace Hotel in Ikoyi, Lagos State.

According to the Vice President, while it is true that the freedom of expression is enshrined in our constitution, society, progress, and order depend upon the responsible exercise of freedom, otherwise the end result will be anarchy.

“Nation-building is not the sole preserve of politicians and governments; in fact, it is just as much a task for civil society of which the press is an important member,” the VP stated.

Acknowledging the significant role of the Nigerian media in actualizing democracy, the Vice President urged media practitioners to continue to speak truth to power.

“The Guardian harked back to the proud and illustrious tradition of the Nigerian press that practiced journalism with a social mission and a commitment to speaking truth to power. It played an important role in the struggles that birthed our democracy, suffering proscription and the firebombing of its business offices at Rutam House. Alex Ibru, himself, narrowly survived an assassination attempt in which he was severely injured.

“Years later, I confronted the horror of the attack on him myself, when as Attorney-General in Lagos, it was my lot to prosecute his assailants. It was a reflection of the terrible costs that journalists bore as they continued to heroically ply their craft as an act of resistance against tyranny.

“For decades, the men and women that work at The Guardian have drawn inspiration from the immortal words of Uthman Dan Fodio on its masthead: “Conscience is an open wound. Only truth can heal it.” It is the role of journalists to tell the truth even when it is inconvenient. This mission has a special resonance in this day and age.”

Calling on the Nigerian press to effectively tackle the spread of fake news, Prof. Osinbajo submitted that, “even as we strive to make governance more transparent and accountable in its workings, and to abandon the habits of secrecy and opacity that became deeply ingrained during the era of military rule, we have realized that abuse of state power is not the only threat to the liberal tradition. Right now, we also have to deal with issues such as the proliferation of fake news.

“Almost daily, fake news or mischievously manipulated news is trafficked with the clear intent of warping the perception of reality and inducing conflict.

“It is said that journalism is the first rough draft of history. It is true that reportage shapes the perception and understanding of events. It shapes memories and can influence behaviour for good or for ill. There are arguably no bigger influencers than those who report and interpret the world to us. This is considerable power and it comes with responsibility.”

While commending the Guardian Newspapers for raising the standards of journalism in Nigeria, the Vice President noted that there must be collective effort by media organisations and practitioners to uphold and improve on the quality of professionalism.

He said, “The story of The Guardian Newspaper is significant, for the redefinition it meant for print media in Nigeria, and for its uniqueness in bringing public intellectuals and academics into journalism and breeding a generation of talented journalists.

“About four decades ago, The Guardian set new standards that forever transformed the practice of journalism. Today a more complex media and information landscape require a corps of professionals to set new standards and raise the quality of the fare on offer.

“The pioneers of The Guardian understood that journalism operates in a social context and cannot be value-neutral. This same cognitive commitment is incumbent upon all media practitioners today. We are at a time in our national odyssey in which retailers of discord and merchants of strife are working assiduously against our collective potential as a people.

“Creating commonality of purpose in ethnically and culturally diverse societies is challenging the world over. However, nation-building is not the sole preserve of politicians and governments; in fact, it is just as much a task for civil society of which the press is an important member.”

The Vice President commended the authors, The Guardian Newspapers “and especially the chief custodian of the legacy, Lady Maiden Alex-Ibru “for broadening our understanding of history, for the appreciation of the present and inspiring the future.”

Previous Posts I AGREE WITH THE PRESIDENT THAT FIRST LADY AISHA IS A WORTHY PARTNER, BEACON OF THE GOOD THINGS FROM OUR ADMINISTRATION, SAYS OSINBAJO
Next Posts Thespian, teachers relish Sanwo-Olu’s benevolence