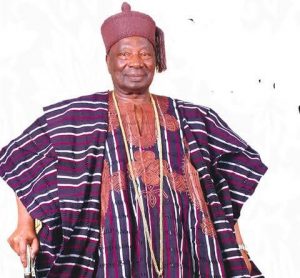 The immediate past Governor of Oyo State and Deputy National Chairman of the All Progressives Congress (APC), Senator Abiola Ajimobi has congratulated the Soun of Ogbomoso, Oba Oladunni Oyewumi Ajagungbade 11 on the occasion of his 94th birthday.

The former governor described the Soun as a living legend whose reign has brought peace and unity to Ogbomosoland and by extension Oyo State.

A statement by Bolaji Tunji, Special Adviser Communication and Strategy to the APC Deputy National Chairman (South) quotes Ajimobi as saying that clocking the enviable age of 94 is no mean achievement also considering the fact that the nonagenarian monarch still enjoys good health.

Ajimobi described the Imperial majesty as a highly respected and revered monarch who has been a stabilizing factor in the social and traditional institutions in Oyo State and Yorubaland.

He described Oba Ajagungbade’s reign as the pivot for the giant developmental strides Ogbomoso and its surrounding towns have witnessed in recent time.

“With your nearly five decades on the throne of your forefathers, Kabiyesi, you have brought tremendous development to Ogbomosoland and its surrounding towns”, Ajimobi said

According to Ajimobi, the Soun had always demonstrated total commitment to the sustenance of peace in Ogbomosoland and Oyo State in general. “His love for his people have shown in the giant strides of Ogbomoso sons and daughters, both at home and in the diaspora. Though it is always said that uneasy lies the head that wears the crown, by carriage, achievements and astuteness, Kabiyesi has shown that he has been able to carry his subjects along on every steps he has taken since his ascension to the throne about 47 years ago.

The monarchy is a labour intensive industry, to quote the former British Prime Minister, Harold Wilson, but Kabiyesi has labored in love for his people and he has been accorded the necessary support that has allowed peace and tranquility to reign in his domain”.