Relief materials will be provided to help rebuild affected communities 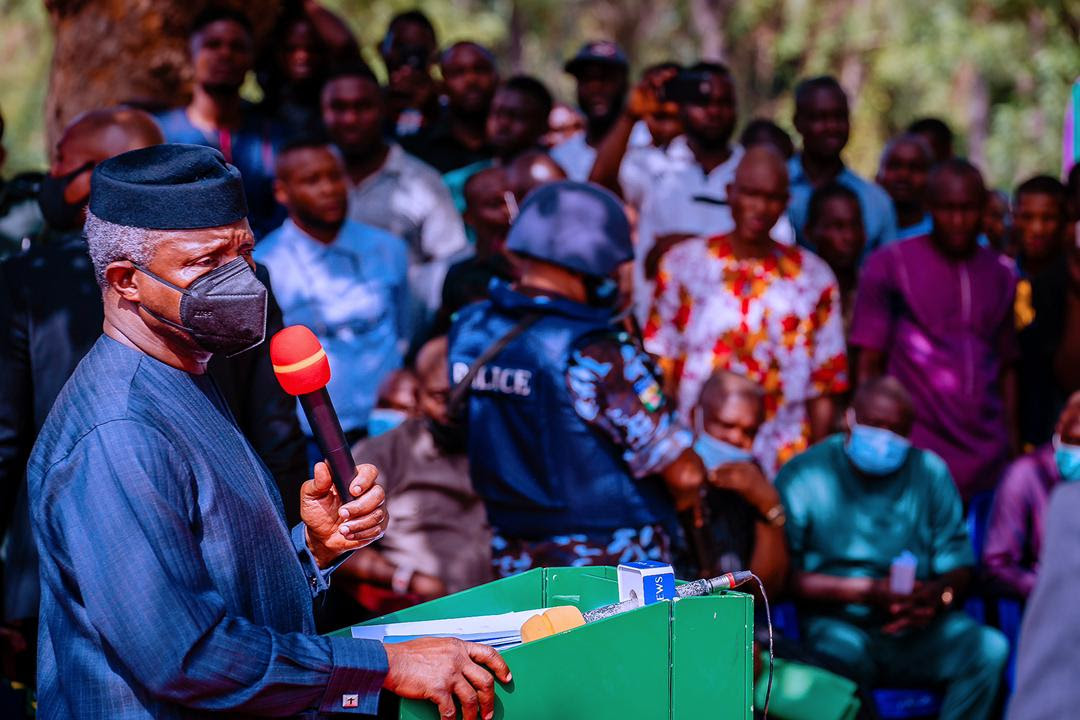 The Federal Government will do everything to ensure that security is beefed up in communities affected by recent communal clashes and violent attacks in Ebonyi State, while ensuring justice for victims, according to Vice President Yemi Osinbajo, SAN.

He condemned the attacks, and sympathized with the victims, describing such acts as cowardly, wicked and “very deeply distressing.” 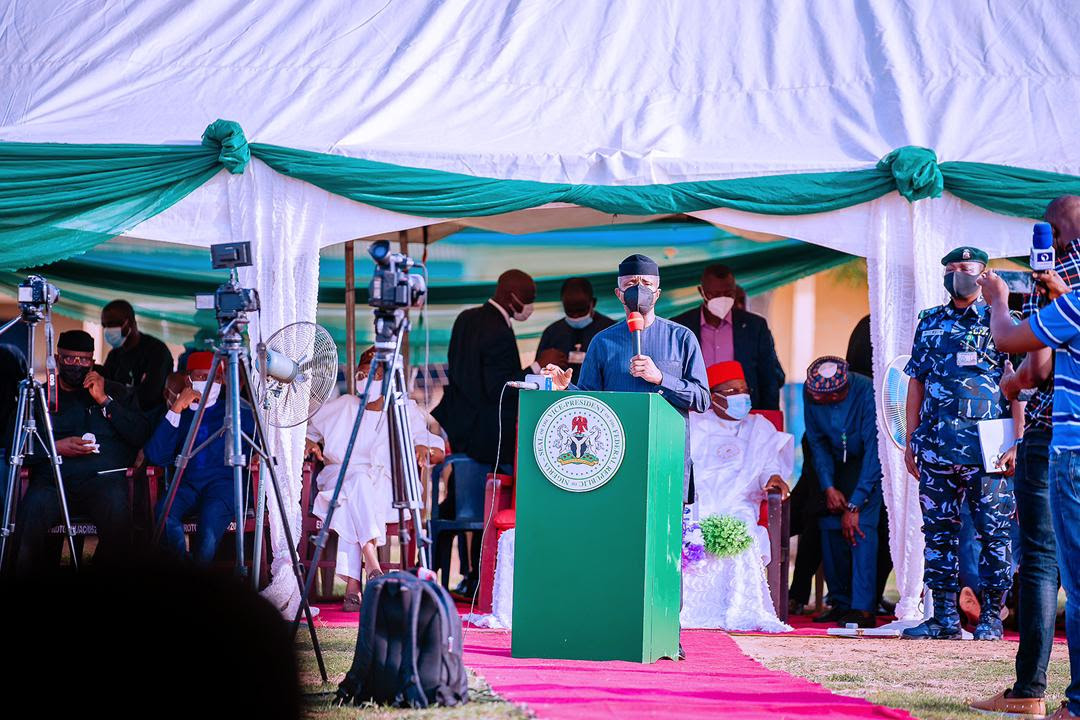 Prof. Osinbajo stated this on Easter Sunday afternoon during a visit to Ebonyi State after attending Resurrection Sunday service at the Aso Villa Chapel.

At the State, the Vice President stopped at the Egedegede community in Ishielu Local Government Area, which suffered suspected herdsmen attacks recently and Ezza/Effium communities in Ohaukwu Local Government Area where communal clashes had occurred. Announcing at each stop that he is visiting at the direction of the President, the VP later held an interactive session with stakeholders at the State capital before returning to Abuja late last night.

The Vice President was accompanied on the visit to the affected areas by the Ebonyi State Governor, Engr. David Umahi, who received him at his first stop at Ishielu LGA. He had earlier been welcomed by the Enugu State Governor, Mr. Ifeanyi Ugwuanyi, at the Akanu Ibiam International Airport in Enugu from where he drove to Ebonyi State.

On the VP’s delegation were the Information and Culture Minister Alhaji Lai Mohammed, Steel & Mines Development Minister of State Mr. Uche Ogah and the Special Adviser on Political Affairs to the President, Senator Babafemi Ojudu, among other dignitaries.

According to the Vice President, “there is no way we can, by saying sorry, fully compensate for the lives that have been lost and property destroyed. I want you to know that one way we can do something is by seeking justice and providing for the families of those who have lost their homes and we would do so.”

He added that government will ensure justice is done and the perpetrators brought to book, while urging the people of the communities to remain calm and avoid reprisal attacks.

“Anybody who watches another person killed next to him and does not feel angry and pained, and doesn’t feel the person deserves justice must answer to God ultimately. So, don’t be under any illusion, we will make sure so long as it lies within our power, that we will seek justice and get justice.

“Which is why I will urge you as you have done, and you have done the right thing in my view, you have peacefully presented the case, you have very peacefully conducted yourselves, reported to the authorities and sought the right support from the government.

“It is up to the government to provide the best that they can. But we must be careful also not to seek revenge because we don’t know where it will end.”

Assuring the people of improved security in the affected areas, the Vice President stated that government will beef up the security in the communities to forestall a reoccurrence.

At the Ezza and Effium communities in Ohaukwu LGA, the VP noted that the President was extremely concerned about the recent unfortunate incidents.

“Mr. President was particularly concerned about these, and of course, we spoke to the governor and he-the President-thought it would be good for me to come here on his behalf to speak to the communities, especially the leadership of the community.

“I want to say that it is a very deeply distressing thing and I sympathize not just with the governor and the people of Ebonyi State, but in particular, the people of the communities that have been affected,” he said.

While emphasizing the need for politicians and other category of leaders to prioritize the welfare of their people, Prof. Osinbajo stated that, “politicians who try and create a crisis by milking the death of their people…that is completely irresponsible.

“There is no excuse for it. It is the duty of leaders, political leaders to moderate their statements and to make sure that their statements don’t worsen matters and create a crisis,” he added.

The Vice President added that the Federal Government will collaborate with the State Government to ensure peace in the affected areas and justice for the victims of the separate incidents.

Noting some of the steps articulated by the National Economic Council (NEC) to resolve lingering conflict in communities across the country, Prof. Osinbajo said, “we (both the Federal Government and State Governments) will jointly pursue the ends of justice. We will also make provisions, as much as it is possible, between the Federal and State Governments, for those who have lost their lives, for their relations and whatever can be done to support those communities.”

He added that the National emergency Management Authority (NEMA) would assess the incidents so as to provide support to victims and help in rebuilding the affected communities.

According to the VP, “the first line of peace is the community itself and the leadership of the community. As I’ve said to His excellency, the Governor, who as you’ve heard from everybody, has done an excellent job of trying to ensure that peace is brought and returned to this place.

“I have said to him, – yes, we’ll make sure that we commit to bringing more military, more police, more law enforcement and whatever we can do about rebuilding the communities, rebuilding houses that have been destroyed, providing succour to those who need it in form of reliefs from NEMA. The federal government will do its very best, but we must make sure as community leaders that we take responsibility.”

Later at a townhall-like interactive session with community leaders and stakeholders across the state in Abakaliki, the Vice President assured the people of Ebonyi of the Federal Government’s commitment to ensuring that lasting peace returns to Ebonyi and elsewhere in the country.

He however urged all leaders in the state to resist all temptations of revenge attacks on communities noting that “no conflict that started anywhere in recent time has ended.”

On his part, Governor Umahi, while thanking the President, Vice President and the entire Federal Government for the steps taken so far to address the concerns, noted that justice and fairness were the only demands requested by the people of the state.

He appealed to the Vice President to support the rebuilding of the affected areas even as measures should be taken to provide immediate relief to displaced persons.

Laolu Akande
Senior Special Assistant to the President on Media and Publicity
Office of the Vice President
5th April, 2021

Previous Posts You Are A Source Of Inspiration To Many: Hon. Akínrẹ̀mí Jagaban Felicitates With Dr Florence Ajimobi On Her 62nd Birthday
Next Posts Lawmaker, Akande-Sadipe Celebrates Dr. Florence Ajimobi at 62