ELECTRIC CAR ASSEMBLED IN NIGERIA IS A FANTASTIC INNOVATION, I CAN TELL BECAUSE I JUST DROVE IT, SAYS OSINBAJO.

ELECTRIC CAR ASSEMBLED IN NIGERIA IS A FANTASTIC INNOVATION, I CAN TELL BECAUSE I JUST DROVE IT, SAYS OSINBAJO.* 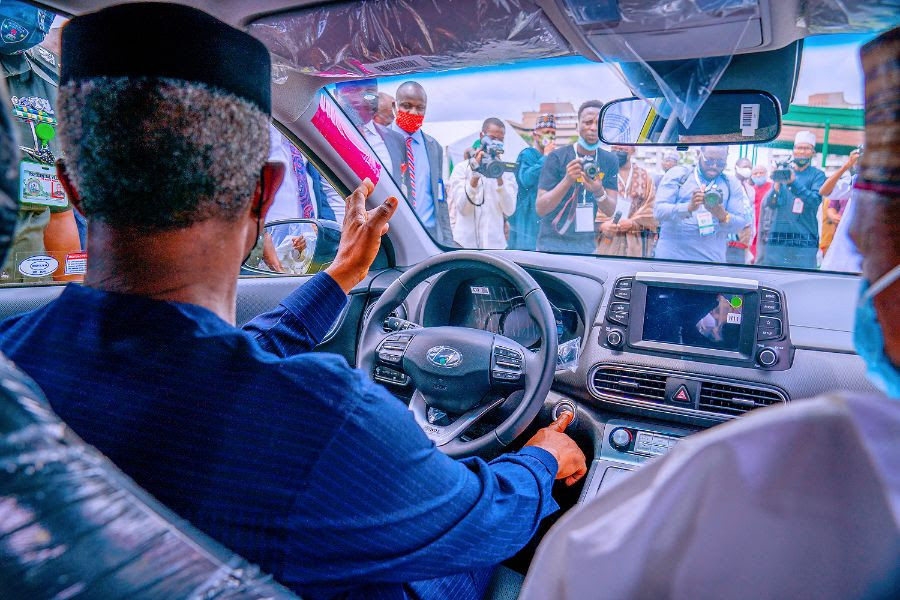 After driving Kona, the assembled-in-Nigeria electric car at the ongoing Made-in-Nigeria exhibition, Vice President Yemi Osinbajo, SAN, concluded that the drive was fantastic and the making of the innovative car is a showcase of what is possible in our country. 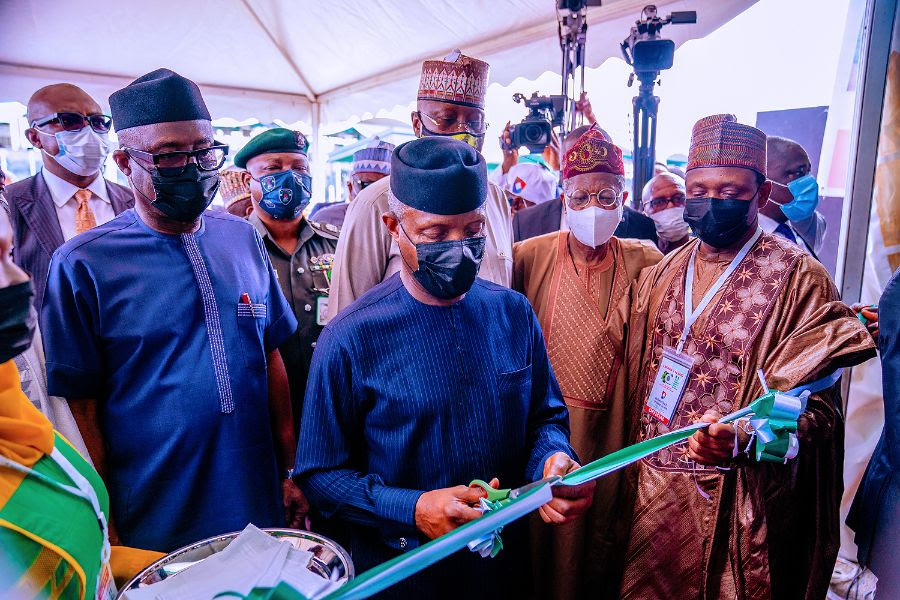 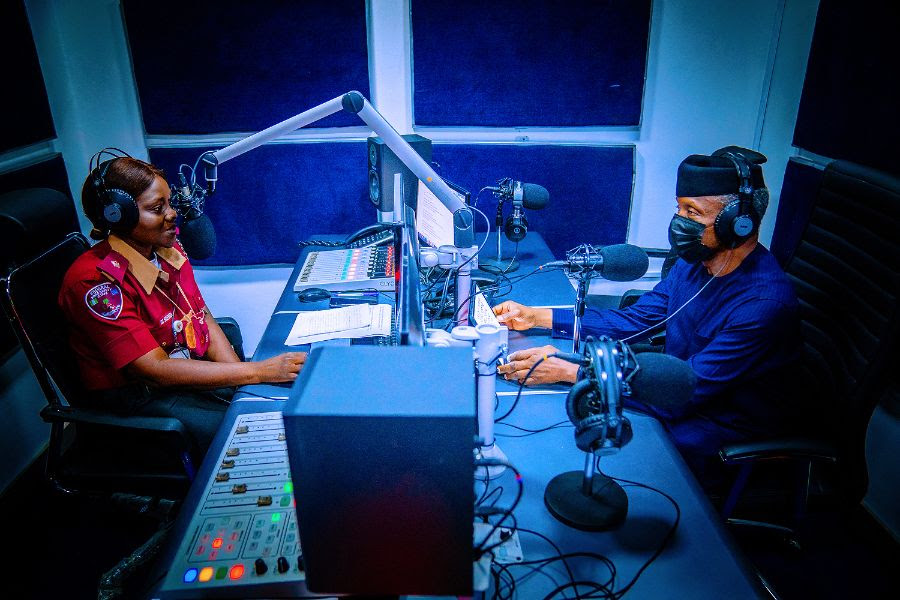 Prof. Osinbajo stated this in Abuja today shortly after the unveiling of the Made-in-Nigeria fair featuring the exhibition of the first electric car assembled in Nigeria, among other locally manufactured products.

Aside touring the exhibition stands accompanied by top government officials, the Vice President drove the electric car alongside the Ministers of Industry, Trade and Investment, Otunba Niyi Adebayo and Director General of the National Automotive Design and Development Council (NADDC), Mr Jelani Aliyu.

Speaking to journalists shortly after a tour of the exhibition stands, and a ride in the electric car, Prof. Osinbajo said “it was a very good drive, fantastic. It just shows what is possible. I am glad to see that this is an assembled-in-Nigeria electric car. You can literally charge it anywhere. I think it is a very fantastic innovation; fantastic product, and I can tell because I just drove it.”

Other dignitaries at the event which is part of Nigeria’s 60th anniversary celebration include the Secretary to the Government of the Federation, Mr. Boss Mustapha, Ministers of FCT, Mallam Mohammed Bello; and Information and Culture, Alhaji Lai Mohammed.

Right after the exhibition, the Vice President also visited the Federal Road Safety Corps’ headquarters where he inaugurated the National Traffic Radio, 107.1 FM.

There he described the radio as “an important and strategic initiative in several respects. The service will enable effective dissemination of relevant information on road safety and the provision of up-to-date information on road conditions, as well as traffic status and security to the public.”

According to him, beyond the core objective of enhancing the operations of FRSC personnel, the radio station will also be useful in reaching far flung areas for teaching and dissemination of public health advisories and general information to Nigerians.

Prof. Osinbajo then featured during the radio station’s traffic report programme where he gave live traffic situation report across the country particularly from areas in and around the FCT, Jos and Lagos. He was funny and jovial about it.

“Good afternoon wherever you are in this great country, this is Yemi Osinbajo, your always ready, always accurate traffic reporter, updating you on the traffic situation across the nation.

“So, let’s go the FCT. As of a few minutes ago, the Keffi-Abuja inward section, traffic from Nyanya under bridge to Kugbo, towards the city centre, is slightly free flowing, no impediments reported.

“Umaru Musa Yar’adua way, the situation is report shows that there is free flow of traffic on both sections of the expressway. Kubwa-Katampe, Wuse-Berger, traffic services unit reports affirm that there is seamless traffic flow with moderate movement of vehicles.

“Traffic update along Lagos-Ibadan expressway as at 11:45 am did say that the inward corridor and section of the expressway is experiencing very slow but moving traffic from the stretch of lotto to NASFAT, Chinese company around Magboro, Punch-Arepo inward, Warewa, due to high influx of vehicles and the narrowed lane around the construction area. The sharp bend coupled with picking and dropping of passengers, all that is causing some slow movement around that area.

“Traffic from Plateau State from about 12 mid-day. General traffic within Jos-Bukuru metropolis is free flowing. Jos-Hawan Kibo, motorists are admonished to be mindful of hills and steep bends around Hawan Kibo.

“Also, Jos-Bukuru-Vom is experiencing free flow of traffic while motorists are advised to be careful around Ganaruwa hill. Jos metropolis, road users navigating inwards Polo-Gada Biu through the metropolis should be mindful of heavy duty vehicles and drive with extreme care. At Hill station roundabout to Polo roundabout axis is a sloppy terrain.

“So, the general conclusion is that road users are enjoined to obey traffic rules, avoid dangerous driving and use the roads as responsibly as possible. All is going to be well today, this is going to be a great and exciting day. I am sure you are going to have some really good news. Thank you dear listeners, stay safe always.”

Dignitaries at the event include Secretary to the Government of the Federation, Mr Boss Mustapha, FCT Minister, Mallam Mohammed Bello and the FRSC Corps Marshal, Mr Boboye Oyeyemi.