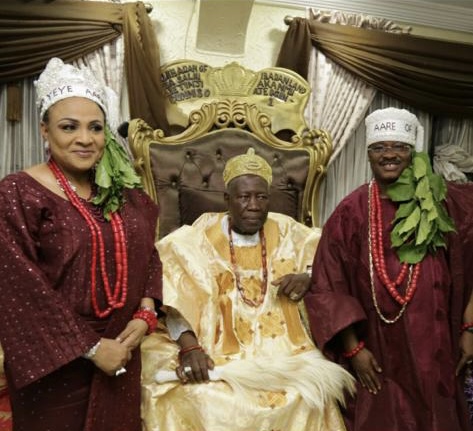 According to Mrs Ajimobi who is presently out of the country, the transition of the Olubadan still came as a deep shock in spite of having lived to an enviable age of 93 years. She described the passage of the first class Oba as a colossal loss to ibadanland, Oyo State and Yorubaland at a  time his wisdom, wise counsel and experience was needed while the void of his transition,coming shortly after the death of another royal father, the Soun Of Ogbomoso, Oba Oyewumi Ajagungbade111, would be sorely felt.

The Wife of the former governor of the State said the late Olubadan was a highly respected  traditional ruler who was committed to the  welfare of Ibadan people and was a strong advocate of the development of Ibadanland and Oyo State.

She noted that Oba Adetunji was a strong pillar of support to her late husband who consulted him on traditional matters contrary to what some people assume was a frosty relationship between the duo.

Mrs Ajimobi said the death of Oba Adetunji has left a vacuum in Ibadan and Oyo State considering his dedication to the development of  Ibadan land and Oyo State.

“I share in the grief of the immediate family of the Olubadan, the Olubadan–in– council, other royal fathers, his associate and those who have benefitted from their association with him as a business man and music promoter before he  assumed the throne, the people of Oyo State, and Nigeria, especially those who would continue to miss the void he left behind.  In spite of his advanced age, I know that no words can adequately capture the grief and the pains of the loss, I however pray that the Almighty Allah will  grant his soul Al Janah firdaus.”

Previous Posts 2022 WILL BE A SEASON OF CONSOLIDATION, SANWO-OLU ASSURES LAGOSIANS
Next Posts OUR TARGET FOR COMPLETION OF RED, BLUE LINE RAIL PROJECTS STILL ON COURSE, SAYS SANWO-OLU