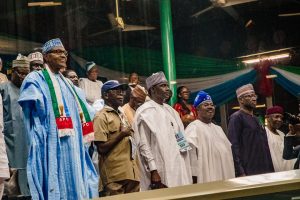 A group, the Nigerian Progressive Youth Coalition, has praised the emergence of immediate past Oyo state governor, Abiola Ajimobi as the new deputy national chairman of the APC, citing it as a great step in the right direction of unifying the party.

The group leader, Bolaji Afiz Repete, in a statement released in Ibadan on Thursday 6th Feb, stated that Ajimobi’s emergence is just the right tonic the party needs in positioning itself for future elections.

He described Ajimobi as a true leader who possesses inherent capabilities to unite all feuding factions within the party. He said Ajimobi is a bridge builder who commands a lot of goodwill and respect across the country and as such has the capacity to take the party to where it should be in the south and particularly the southwest.

He also cited Ajimobi’s achievements in transforming Oyo state phenomenally for the better over his 8yr rule claiming this is a testament to Ajimobi’s indisputable credentials.

He enjoined all members and stakeholders to unite behind and support the former 2 term governor on his new assignment.